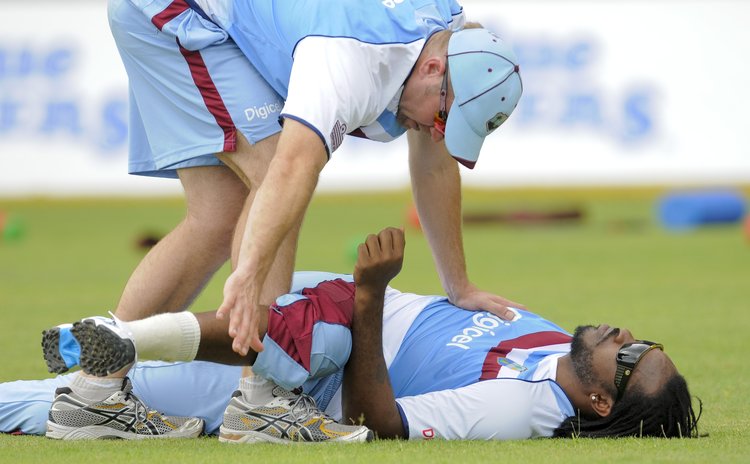 KINGSTON, Jamaica – Chris Gayle is fully prepared for what he described as the "perfect occasion" – his 100 Test match for the West Indies. The powerful left-hander added that he is eagerly looking forward to the historic event – especially at his favourite ground with family, friends and supporters watching.

Gayle is expected to be the headliner as West Indies look to draw first blood against New Zealand in the first Test match at Sabina Park. First ball on Sunday is 10 am (11 am Eastern Caribbean Time).

"This is a huge milestone, this is very special and something I'm really looking forward to. It all started in Rollington Town – I used to play cricket on the street then I moved to Lucas Cricket Club and here I am today about to play my 100th Test match for the West Indies," Gayle said.

The 34-year-old made his Test debut against Zimbabwe at the Queen's Park Oval back in 2000. In that match he scored 33 and 0. He is now set to become the ninth West Indian to appear in 100 Test matches. The others are Shiv Chanderpaul, Courtney Walsh, Brian Lara, Sir Vivian Richards, Desmond Haynes, Clive Lloyd, Gordon Greenidge and Carl Hooper.

"When I look back I have come a long way. In my first match I was a bit nervous, but then I had played a few ODIs before so I settled down pretty well. I remember it very well. I even shed tears. To share a dressing room with Ambrose and Walsh – and being at first slip with the two big men bowling and hitting edges and me taking a few catches – was very good for me," Gayle said.

"When I batted in the first innings I was feeling really good and was looking for a big score. I got run out in a mix-up with Sherwin Campbell and I remember going back to the dressing room and I cried like a baby. I knew I was going to get a 'big one'. It was a special match and I will remember for all time.

"Now I've reached my 100th match and it is special because it is at home. Sabina Park is my favourite ground. It has changed a bit over the years and it's very special to play cricket here at home with my family, friends and supporters in the crowd, I always love playing at home and Sunday's match will have great significance for me.

"I'm looking forward to it and I also want to have a huge performance. I'm sure the fans will be thrilled to see this occasion on television across the Caribbean and around the world. They have been very supportive throughout the years – when I have had my ups and downs."

The match will mark a change in the leadership of the West Indies. Denesh Ramdin, the 29-year-old wicket-keeper, has taken over the captaincy from Darren Sammy, who led the team from 2010.

Gayle said the overall team goal is to win the match and take a 1-0 lead in the three-Test series.

"Hopefully we can win this Test and match and celebrate the occasion. I will look to contribute to the team and success. The focus is on winning. It will be most memorable to get a win and start the series on a winning note," he said.

"It is big not just for me but for the team as well – I am sure everyone will be rallying around me. I have had my challenges coming up to my 100th Test match. To be able to stand here today I am very proud and I want to keep scoring runs and represent the West Indies as long as I can."

Gayle's biggest Test innings is his monumental 333 against Sri Lanka at Galle in 2010. He also rates it as his best Test innings. It was his second triple century at the highest level following the 317 he made against South Africa at the Antigua Recreation Ground in 2005. He is one of only four men to make two triples in Tests – the others are Brian Lara, Sir Don Bradman and Virender Sehwag.

At this stage of his career Gayle has made 6933 runs at an average of 42.01 runs per innings. He has also captured 72 wickets with his off-spin bowling and held 90 catches.

"That innings stands out in my mind and I put it at Number one. Over the years, playing against Sri Lanka, I didn't get a lot of runs. I had a terrible series there before – I was dismissed by Chaminda Vaas five times out of six – my highest score was 47 – and I was never dominant against them. When I got the first century I lied flat on the ground and I told myself I wanted to make it a 'big one'. I pushed for it and got the triple century," Gayle recalled.

"To beat England at home, as captain was brilliant. We had some close calls in that series and it was very special. That was one of the highlights of my career. Sunday will be another special moment.

He concluded: "The most pleasing thing is that I have made a lot of people happy. I have brought happiness and I have made an impact and I am happy about that. To make an impact on other people's lives is important to me. Once the people are happy I am happy."