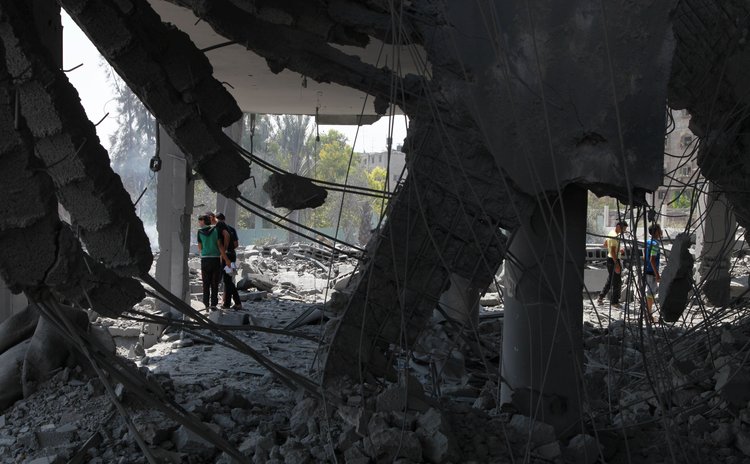 An Israeli airstrike on the southern Gaza Strip city of Khanyounis killed four and injured a number of pedestrians, medics said, adding that Israeli bombardment in the southern Gaza strip of Rafah killed 14 people earlier in the day.

Meanwhile, Gaza health ministry urged the international community to intervene so that the dead bodies and the wounded can be taken to larger hospitals in the Strip.

Security situation in Gaza has dramatically worsened only hours after a 72-hour humanitarian ceasefire came into force in the early hours of Friday as Israeli artillery fire killed more than 100 Palestinians in Rafah, leaving the hard-earn conflict break simply in tatters.

A Palestinian delegation, including Hamas and Islamic Jihad representatives, flew to Cairo on Saturday to discuss a long-term truce, while Israel refused to attend the talks.

When the ongoing Gaza conflict broke out last month, Egypt proposed a truce deal, accepted by Israel but rejected by Hamas. The Islamist group deemed the proposal unacceptable as many of its key concerns, such as the lift of years of blockade on Gaza, were not recognized.

Egypt's President Abdel Fattah al-Sisi said on Saturday that the Egyptian truce plan provided a "real chance" to end the Gaza conflict, urging both Israel and the Palestinians to implement it.

More than 1680 Palestinians were killed, and some 9000 others were wounded since Israel stepped up the offensive on Gaza on July 8. On the Israel side, 61 soldiers and three civilians were killed.

"From the beginning, we promised to return the quiet to Israel' s citizens and we will continue to act until that aim is achieved, " Netanyahu said in a televised statement. "We will take as much time as necessary, and will exert as much force as needed," he vowed.

Netanyahu added that Israel "will make every effort" to bring the alleged captured soldier Hadar Goldin back home. Israel charges the soldier was captured Friday during a clash with Hamas militants, yet Hamas denied it had any knowledge on the missing soldier.

The security cabinet decided late on Friday night not to send a delegation to the Gaza ceasefire talks in Cairo, a part of the U.S. /UN backed truce deal, on Saturday as planned, charging there is " no point" in trying to achieve an agreement with Hamas.

Israel launched on July 8 a military offensive to stop Hamas' rocket firing on its southern communities. Tel Aviv later said the bigger threat menacing Israel's security is cross-border tunnels, through which Gaza militants could use to launch attacks and carry out kidnappings of Israeli nationals.

However, a military official told Ynet news website earlier in the day that they were "very close to complete" the destruction of some 30 trans-border tunnels. He estimated that all of the known tunnels will be destroyed by Sunday.

Dozens of Palestinians, including women and children, gathered on Saturday afternoon on the outskirts of the northern Gaza Strip towns of Beit Lahia and Beit Hanoun, preparing to go home after the Israeli army officially agreed their return.

Israel Radio quoted high-ranking Israeli army officials as saying that the families, who left their houses when Israel's Gaza offensive began early last month, can go home, yet warned them not to approach the border fences.

Meanwhile, a Xinhua reporter in Gaza said he saw dozens of families, who fled their homes and took a refuge to schools run by the UN Relief and Works Agency (UNRWA), returning to their homes in northern Gaza Strip, right after Israel signaled the green light.

Still, dozens of families remained hesitant, fearing that they might be targeted again by the ground forces, which have yet to withdraw.

A 43-year old woman, a hair dresser, said that she left her house 20 days ago and stayed at an UNRWA school, adding "I don't know whether to go home or wait another two days."

Another woman collecting some stuff she managed to take with her said "I collected our stuff, and now we are going home together with my husband and my children," adding "we are glad and we hope that this tragedy will end peacefully." Her family ran away from their house three weeks ago.

Eyewitnesses said they have managed to reach their homes in the northern Gaza Strip town of Beit Lahia after the Israeli army ground forces pulled back.

However, Mushir al-Masri, a senior Hamas movement official, called on the fleeing families to be patient and to wait for a while before home-coming.

"The Palestinian resistance will confront any Israeli unilateral withdrawal from the Gaza Strip if the Israeli occupation rejects to meet the Palestinian demands," said al-Masri, adding "This scenario will never bring clam or security to the occupation and this expresses that this occupation is confused."

According to the UN estimates, a quarter of Gaza's total population are now displaced, while the homes of almost 60,000 were destroyed in the Israeli bombardments, apart from those who lost lives or were wounded in the conflict.