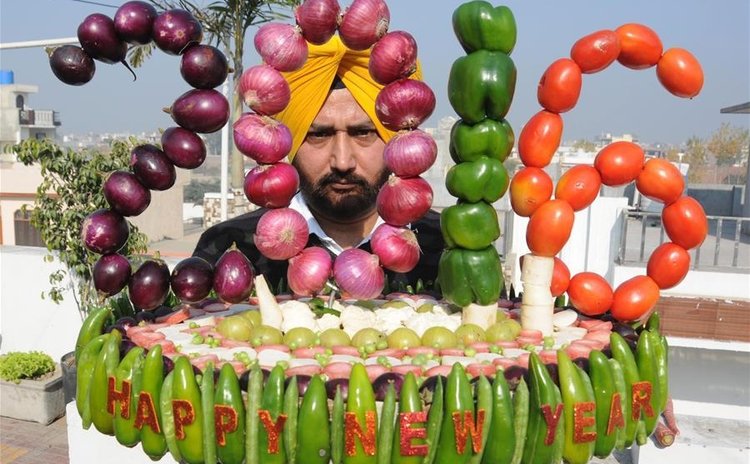 An indian artist presents a model in formation of 2016 with vegetables to welcome New Year in Amritsar, northwestern India on Dec. 31, 2015. (Xinhua/Stringer)

BEIJING, Jan. 1 (Xinhua) -- Bidding farewell to an eventful 2015, the world is embracing a new year on Friday. The following is a list of major political and economic events that are expected to shape the global landscape in 2016.

Though facing downward pressure, China's economy is expected to maintain a steady growth as the government has already made adjustments to promote sustainable development, mainly by implementing substantial social and economic reforms.

The eye-catching "13th Five-Year Plan" will be ratified and formally released by the annual sessions of China's top legislature and advisory body in March 2016 (the "lianghui" or "two sessions").

In order to promote sustainable growth in the "13th Five-Year Plan", Beijing has launched policy initiatives to deepen reform, propose innovations, enhance coordination, and go green along with opening and sharing its concepts.

The five development philosophy would alter the quality of China's economic development, which is of great significance especially at a time when the already fragile global economy is about to feel the impact of the U.S. Federal Reserve's decision to raise interests rates.

According to U.S. Constitution, U.S. President Barack Obama shall leave his post after his successor is elected in November 2016.

At the moment, things are heating up in the presidential race, with bombastic billionaire Donald Trump consolidating his status as the Republican front-runner and Hillary Clinton leading the way for the Democrats.

Even though it is too early to predict the winner of the presidential race, it is not too early to reflect on the impact that the election will have on Washington's relations with major countries, as the choice of the next U.S. president could go a long way in determining the future of U.S.-Russia as well as U.S.-China relations.

Russia entered 2015 burdened by a confrontation with Ukraine, which seems to continue to plague Moscow's relations with the West.

But following Russia's air campaign against the Islamic State (IS) terrorist group, which many believed has eclipsed the U.S.-led one, the West has somewhat eased their pressure on the Kremlin over the Ukraine crisis.

In 2016, Russian President Vladimir Putin will face a very serious problem of keeping the military confrontation in the region with the West from spiraling even further, while also preventing Russia from becoming deeply entangled in the Syrian conflict as a whole.

GLOBAL ANTI-TERRORISM EFFORTS TO BE STEPPED UP

Overshadowed by terrorist threats as never before, countries around the globe are expected to scale up cooperation to combat terrorism in 2016.

In 2015, various terror groups and their loyalists made headlines everywhere.

The number of victims in November's Paris attacks is the biggest of terror activity in the modern history of France, and the second-largest in Europe after the Madrid attacks. Its perpetrator, the IS, said in a statement that it was just the beginning.

Shortly after the Paris carnage took 130 lives, 14 people were killed in a shooting rampage in San Bernardino, California by a couple, who later proved to have long been radicalized by online propaganda of the IS.

The world's governments and parliaments scrambled to make decisions despite being overcome by shock and anger, and many feared further blood-shed of their people as experts pointed to "qualitative changes" in the terrorists' strategy.

The general situation in the Asia-Pacific region has been stable through the year of 2015 as favorable economic and political factors keep emerging. The region in the year of 2016 is expected to brace for growing economic opportunities, China's bigger role and the uncertain security environment.

Despite many positive developments, factors destabilizing regional security still exist. The United States, which is continuing its strategic "pivot to Asia," is rebalancing toward the region through uniting its regional allies militarily and pushing the Trans-Pacific Partnership economically.

On the South China Sea issue, the United States, a non-claimant, is interfering in the region by sowing dissension and saber-rattling maneuvers. Individual claimant countries have refused a sincere proposal from China to resolve the disputes through bilateral talks.

The year 2016 is expected to be decisive in the Syrian crisis.

On Dec. 18, 2015, the UN Security Council adopted a resolution to urge the launch of peace talks in early January, stressing that "the Syrian people will decide the future of Syria."

The latest UN document, which is legally binding, paves the way for maintaining the political momentum in the peace process, and it could be the first serious move that may end the nearly five-year-old crisis, which has claimed more than 250,000 lives.

In 2016, Europe is expected to step up efforts to better tackle the refugee crisis, which has tested the continent throughout 2015.

Last year, Europe witnessed the worst refugee crisis since World War II, as floods of migrants have been risking their lives to reach the continent to flee their war-torn countries, mainly Afghanistan, Iraq, Syria and Libya.

The influx of refugees has posed challenges to their final destination and brought a heavy burden on transit countries such as Turkey and Lebanon. But more importantly, it has deepened old divergences and tensions among members of the European Union (EU), undermining support in Britain for Europe ahead of a referendum on its EU membership.

The deep political and economic crisis that has gripped Ukraine for two years is now easing, but the country still has a long way to go before an overall political stability is regained.

Although the year of 2015 has been hard for Ukraine, the international diplomatic efforts to settle the situation did yield some positive results.

In mid-February, leaders of Ukraine, Russia, Germany and France reached a landmark ceasefire deal, providing a roadmap for a solution to the conflict.

Though the deal has not been fully implemented and the road is neither quick nor easy, currently a much-anticipated peace is coming to the restive eastern region as guns fall almost silent along the entire frontline and the displaced people are returning.

Economic ups and downs and political struggles between the left and right are expected to take the center stage in Latin America this year.

In 2016, an economic recession will still hover over the region, with some countries sinking even deeper, given a weak recovery of the global economy, the micro-economic situation of falling commodity prices, and the impact of the U.S. Federal Reserve's decision to raise interests rates.

Political restructuring in the region is expected to continue, but in an unstable way, with left-right confrontation getting even fiercer.

On Dec. 1, 2015, China started preparations to host this year's G20 Summit, the theme of which will be "Building an innovative, invigorated, interconnected and inclusive world economy."

At a time when global economic growth rates have weakened and financial markets volatility has risen, the world economy is calling for new momentum and the 2016 G20 Summit will be highly-anticipated.