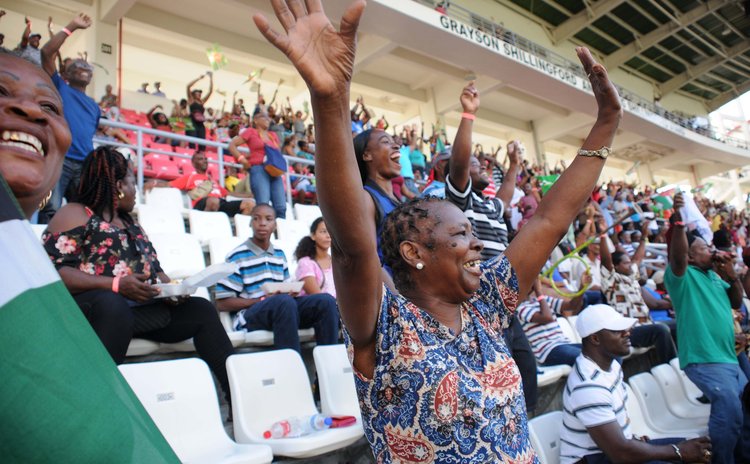 It is the final day of the last Test match in the West Indies and Pakistan series and we're standing in the bottom row of the Irving Shillingford and Grayson Shillingford Stand at the Windsor Park Sports Stadium.

It's 5.30 pm and the West Indies are on the verge of losing the Test match and the series.

But their batsmen are fighting valiantly- they usually crumble like old cards on a windy day.

And Roston Chase, the Bajan batsman is in the nervous 90's- he's been there for a long time poking, defending, walking singles.

The noise continues, the crowd gets into a chant:

They repeat the "Go Chase, go" twenty times then they become less noisy as Chase goes towards his hundred and the West Indies lose another match.

Later, in a post-match interview a smiling Chase says based on the loud support he received from the crowd his team-mates wanted to know if he was "from Dominica" ; Chase said he just loves the Dominican crowd.

Afterwards the WICB reporter emails a report that says:

"West Indies fell to a 101-run defeat with six balls remaining to concede the decisive third and final Test of the Brighto Paints presents the Q Mobile Cup Series and hand Pakistan an historic first series victory on Caribbean soil.

"A memorable, unbeaten third Test hundred of 101 from Chase almost staved off defeat before West Indies were dismissed 202 in their second innings about an hour past the regularly scheduled close on the final day of the contest at Windsor Park.

"Chase and the West Indies lower-order made the Pakistani bowlers toil, after the visitors took the second new ball with 17 overs remaining.

"Tail-ender Shannon Gabriel was bowled by leg-spinner Yasir Shah on the final ball of the penultimate over however, allowing Pakistan legends Misbah-ul-Haq and Younus Khan to retire on a winning and memorable note.

"Had Gabriel survived, Chase would have had strike for the final over, but the Pakistanis won the match and the series 2-1".