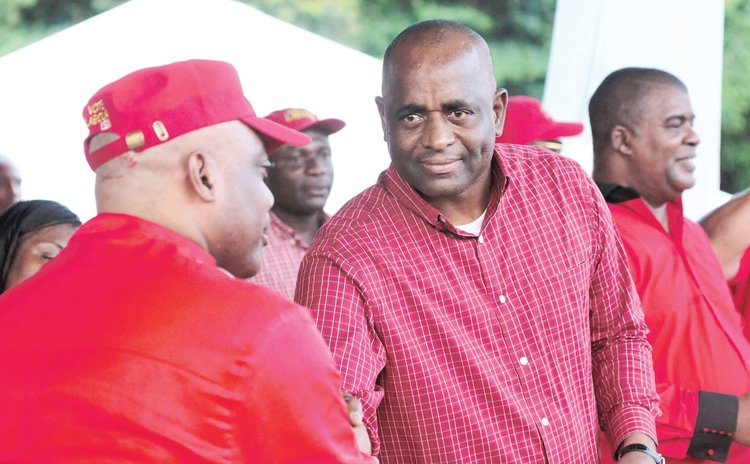 In seeking to justify their reason for supporting someone as greedy, self-aggrandizing, profane, offensive and seemingly so "un-Christian" as Donald Trump, American evangelical Christians contend he was "anointed by God".

They believe they have found the "last Trumpet" who will galvanise the second coming of Christ, and who, like Cyrus, the pagan Persian king who conquered Babylon in 539 BC, freed the Jews, and returned them to Jerusalem where they would rebuild the temple, he does not have to be a Christian to be part of God's plan.

Trump recently boasted he was "the chosen one" and referred to himself as the "king of Israel".

Like Trump, Roosevelt Skerrit, the Dominica prime minister, recently adopted the putative status as the reincarnated savior, infallible messiah and divinity of sorts, suggesting to an audience at the official opening of the first phase of the renamed Dominica China Friendship hospital on 6 September that it was sacrilegious to criticise him.

"I am just an instrument being used by the Lord to work in this country and what I do is not really of my own doing, it is the Lord's. So when you criticise what we do for the good of the people, you criticise, not me, but the Lord," he said.

Some religious leaders here who profess a faith in Jesus, among them the Catholic bishop Gabriel Malzaire, have seemingly tethered themselves to Skerrit by adopting the Peter approach before the cock crew.

Asked whether Skerrit's comment was blasphemous and had gone too far, Malzaire, having explained he was in Nigeria and "completely out of touch", told The Sun: "I don't wish to respond to your request".

The evangelical preacher Peter R. Augustine - who in the past said it was God who "allowed us to have this Prime Minister" - instead of responding directly to the same questions, referred The Sun to Daniel 2:21, which speaks of changing of seasons, the deposing of kings and raising of others, and Proverbs 8:13-17, which speaks about hatred of evil, pride and arrogance and perverted speech and who gives power to kings, princes and rulers.

Monsignor Eustace Thomas, meanwhile, has dismissed the suggestion of blasphemy, stressing that Skerrit is "privileged to consider himself as being chosen by God".

Thomas told The Sun he had no doubt Skerrit had been "specially commissioned by God. And in my soul and conscience, this is my conviction, when I think of the state of our country at the beginning of his life of service as leader of our country, and particularly our achievements after Maria."

The Catholic priest described the prime minister as "a God-fearing man" and practising Catholic who would never think of making blasphemous statements.

"Yes, if someone is doing good, it is of God and if anything good in the interest of God's people is criticised, this means that in an attempt to seek the destruction of an individual, the enemy is actually making fun of, or criticising God. So, I don't believe that the prime minister was blasphemous, I don't think that he equates himself with God; but I do believe that given the respect given to him, locally, regionally and internationally, he was sent by God."

However, there are religious leaders, among them the evangelical pastor, Randy Rodney, who believe Skerrit has set a new benchmark for self-aggrandisement, prevarication and rancor that has taken him loosely outside the boundaries of reason.

In fact, Rodney told The Sun, the prime minister's words and actions are contrary to everything God stands for.

"The truth is, his latest example is not what God would do. God would have asked his servant to give the people an explanation for what they consider the missing $1.2 billion. His declaration of him being a servant of God is inconsistent with God's word, inconsistent to God's will and tantamount to heretical comment. If the PM would like us to believe that he is God's servant in so much that he does whatever God tells him, then we must believe that God also told him to incite the people of Bellevue Chopin to throw hot water on their neighbours who would disagree with him, or to send people to hell who ask him tough questions, or to deny those who he perceives do not support his political party of what they may be entitled to."

Another religious leader, who spoke to The Sun on condition of anonymity, expressed "disbelief" at the prime minister's assertion and was befuddled and exasperated that Skerrit would put himself "on par with God".

"To have any human being say that criticism of him/her is criticism of God is presumptuous. No human being is God, although we are all God's children. Criticisms levelled against us cannot be considered criticism of God. The messengers of the Gospel have throughout the history of the church been criticised, persecuted, abused and martyred. They were rejected together with the message they preached. They suffered for what they believed. Yet they never equated themselves with God," he said.

Trump was given a similar reminder recently that history has not been kind to those who compare themselves to the Messiah. The last US president to do so, Andrew Johnson (1865-9), faced impeachment with the articles citing his "intemperate, inflammatory and scandalous harangues".

Rodney is also warning Skerrit that his snarling, spitting attempt at deity will not end well.

"Our prime minister must take cognition of the precepts in scripture . . . that everybody in scripture who at one point or other try to equate themselves to God, or take God's position or behave like God have ended up on the wrong side of God. I feel sorry, I really do feel sorry that our prime minister would make this comment because God is not pleased about them and anytime you make them you're treading on very, very dangerous grounds."