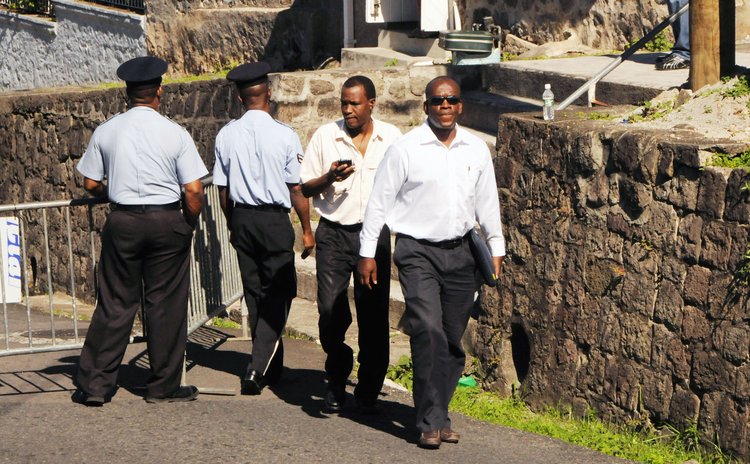 Linton, front right, and Dr Fontaine cross police barricades on their way to the Electoral Office

This morning Lennox Linton and the leadership of the opposition United Workers Party (UWP) walked to the Electoral Office, a gleaming white building that sits almost in the palm of the hands of three churches, the Anglican, Methodist and Catholic Churches on Turkey Lane, Roseau.

But prayer was far from Linton's mind today. His jaw was set, his strides sure, his mind focused; he was going to meet with officials whom he claims did not do enough to guarantee free and fair elections at the 8 December 2014 poll.

Escorted by a senior police officer, while dozens of other policemen and women stood and watched in the background, Linton was today making his second attempt to meet with the officials of the Electoral Commission. The first was on Friday. This morning he was accompanied by fellow UWP leaders Spags John and Dr. Thompson Fontaine.

After the hour-long meeting with Chief Elections Officer Stephen LaRocque, Linton told about 100 supporters who stood behind the police barricade that at the meeting he wanted LaRocque's position on alleged incidents of bribery during the recent election campaign.

"We reminded Mr. LaRocque that it was the Commission that put out a series of public service announcements warning against bribery and other election offences," Linton told supporters. "The payment of airfares to people is an election offence; it is bribery."

He added: "We've asked of Mr. LaRocque to indicate whether the Commission is of the view that the payment of entertainment services from all of those people who were coming in to provide concerts and entertainment to Labour Party supporters- Carimi, Destra, Morgan Heritage etc. whether that is treating within the meaning of Section 56 and therefore an election offence. We've asked for feedback on that".

Linton said LaRocque was also presented with a copy of a letter that the UWP sent to the Commissioner of Police, dated November 30th 2014, in which he pointed to election offences that needed to be investigated.

"We expect that within two weeks we should hear back from them as to their investigation into the count from the Grand Fond constituency," Linton said.

But Dr. Fontaine, who has filed a complaint at the court about irregularities and questionable vote-counting in the Riviere Cyrique constituency where he was a losing contestant, said there isn't much the Electoral Commission can do at this stage.

"We made it very, very clear…that it's only the courts that can open the boxes," he said. "What we are asking for is a clean count."