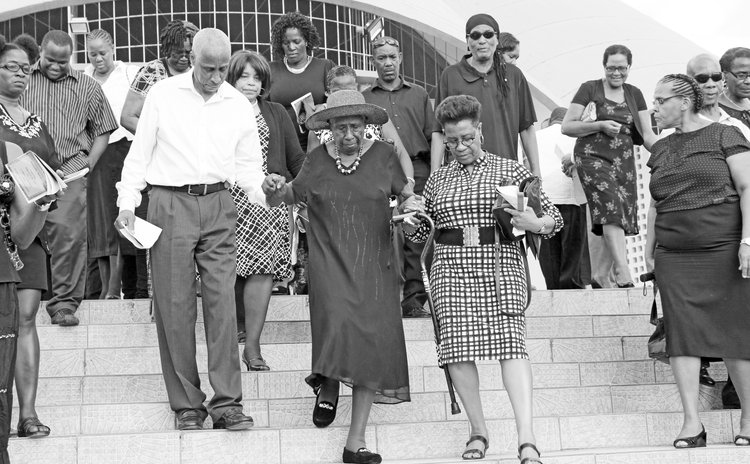 Given the stature of the man, not many people came to say farewell to Glenworth Osmond Norris Emanuel better known as "GON."

Emmanuel was laid to rest at the Roseau Roman Catholic cemetery after a funeral mass held at the St. Alphonsus Catholic Church on April 11, 2018.

Parish Priest of St. Alphonsus, Fr. Charles Martin, the main celebrant at the funeral mass told the congregation that "the soul of Glenworth is in a better place."

"God has led Glenworth to a better place where he will be safe and secure and at peace with God forever. A place where he does not have to worry or fear for his safety and security; no more pain and suffering where he will find rest for his good works," Fr. Martin said. Death, he reminded the congregation, does not choose.

"Death is not a respecter of no one, death does not listen…but death is the gateway to everlasting life," he said.

"We all must die, no matter what; we are on a journey in this life, a temporary journey, we are just passing through but we need to make good our time of this earth," Fr. Martin said.

He reminded the mourners that "no one knows the date, time and or the hour" when they will die. It can happen in your youth or in your ripe old age, all we have to do is to be ready," he said.

"Each and every one of us will be brought before the tribunal of God. We thank Glenworth for all of us being present to reflect on the shortness of life that we all have to die. Glenworth scarified for the poor and have done well and achieved much…he has made a great contribution to society, he has played his part and we thank him for all that he has done, and like St. Paul in 2 Timothy Chapter 12-7 I have fought the good fight and finished and can rest in peace. And so Glenworth, we now entrust you to God our loving and merciful Father our Maker and Redeemer…may you find Eternal Rest with God who has loved you and now called you to himself," Fr. Martin concluded.

Here is the eulogy:

"Mr. Emanuel only went as far as 7th standard in school due to economic circumstances. This however, did not stand in the way of his drive for education and success.

"He departed Dominica for England in 1955 and he worked as a porter for British Rail all the while attending night school to complete and upgrade his primary education. Upon completion of the former he entered London University to read Law. Again, he graduated from University with a degree in law.

"He was admitted to the bar as a member of the Middle Temple, London England in 1962. Mr. Emanuel practiced law successfully in England as a chief clerk at Bow Street Magistrate Court, London and as a Senior Legal Advisor in the department of Public Prosecutions.

"He worked in Grenada as an Assistant Attorney General.

"After returning to Dominica in the 80's, he spent some time as a senior magistrate.

"Mr. Emanuel ran a successful private practice for many years. He was a keen supporter of learning and education and always encouraged talent where he saw it -to the point of financing and mentoring.

"He was a WW II veteran, a member of the Royal Commonwealth Ex­ Service League and a Free Mason.

"He leaves behind a loving wife of 55 years , Greta Emanuel; a stepson , Nolan Joseph and his wife Vema Joseph of Edmonton Canada; loyal housekeeper, Catherine Joseph and friend Tony Fontain.

"G O N Emanuel was a single-minded and driven individual who did not shy away from controversy; he did it his way.