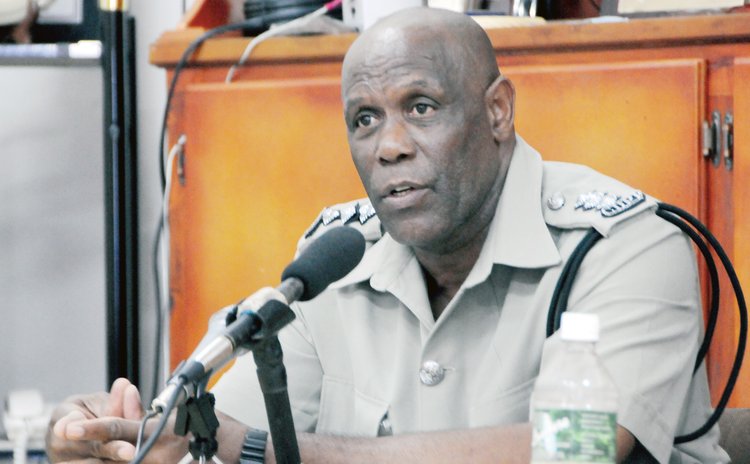 He won't be departing alone; with him will be ASP Starford Vigilant, Inspector Cyprian Defoe and Sergeant Jno Baptiste Prince who have all served in the Police Force for 40 years having been enlisted on July 15, 1974.

For Superintendent Irish it has been "a bitter sweet journey"; he worked in various out-district police stations across the island and also spent 16 years in the Criminal Investigation Department (CID); during that period he received training in finger printing and photography in England.

"I have really enjoyed myself in the last 15-20 years in the police service; it has been challenging but gratifying and I can only hope that the youngsters in the service today will continue to appreciate the fact that we are servants of the public and we have to respond to reports professionally and efficiently. I have worked with eight chiefs of police and they have given me some sound and positive commendations," Irish said.

He disclosed that last week at a brief ceremony, the Permanent Secretary in the Ministry of National Security, Nicholas Bruno, handed him a plaque and he received glowing tributes from senior members of the Police Force who attended the function.

"I felt moved and cried…tears were of joy. As I leave the Police Service, I hope that the youngsters and others will continue to touch base with me because I am still willing to impart all the knowledge and experience that I have gained in the Police Force," he said.

"The Police Force, in the past ten years, have gotten so much equipment, training and other things that we never had in the past; but the old heads would respond "efficiently", we would run across as soon as something happens. It has become a bit tardy in recent times but I think we have to step up in terms of productivity," Irish said.

Superintendent Irish said he would like to see more police officers on the beat intermingling more with the people in the community.

"We have been very resolute in Dominica in our crime solving despite our limited resources. Seventy percent of crimes are solved. We still have to do more. We can't be complacent, we have to create that environment of safety and soundness to ensure that we have that sustained growth," Irish stated.

He added: "As we move into the apex of our development, the Police Force is becoming more challenging, criminals are becoming smarter as they operate on a higher plane. We as police officers have to keep abreast with what is happening and ensure that we serve the public properly. We are servants of the public and have to ensure that what we do, we do not fall into any conflict."

The SUN has been informed that Defoe is expected to depart in September while the two other officers will proceed on pre-retirement leave towards the end of the year.

"It has been a wonderful experience working in the Police Force of Dominica and we came as young men on our own accord and have remained very committed," one of the officers who did not want to be named stated.

Irish has been described by his fellow officers as "a strict disciplinarian" who would go "over and beyond" the call of duty.

"That group of senior officers has been very committed and to serve for 40 years does show that commitment however as they go, it gives way for upwards mobility for other officers," one officer said.

Within the next year, at least three other senior officers are expected to demit office, among them Yvonne Alexander, Patrickson Albert and John David.