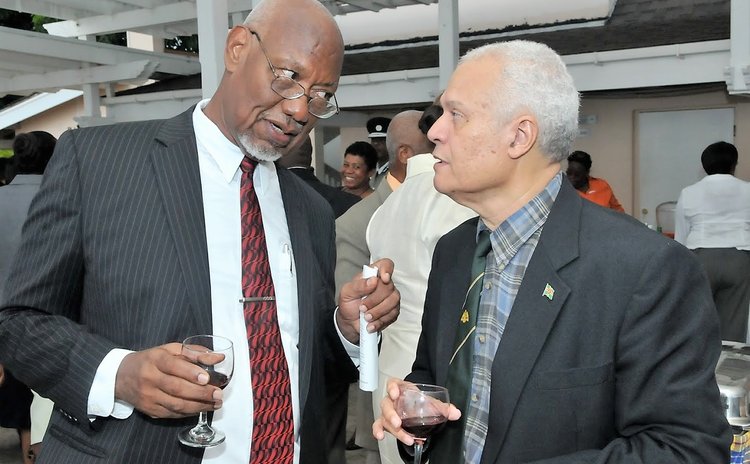 "Love him or hate him, you cannot deny that he left his mark in society…"

The comments were made by one of the newly elected executive members of the United Workers Party (UWP) following the passing of journalist, businessman and Dominica Labour Party (DLP) stalwart Parry Bellot. He was 72.

Bellot who made a name for himself as a popular columnist, owner of PARBEL Enterprises and a founding member of the Dominica Media and Communications Association (DMCA) was also an active and outspoken public figure up until his passing on December 26, 2021.

As many would remember, Bellot who died at the Dominica China Friendship Hospital (DCFH) held strongly to his views, often defending the government's every action no matter how questionable.

"He held strongly to his views and was supportive of the governments led by Eugenia Charles, and Roosevelt Skerrit...In his zealous defence of the government, he supported he certainly gave offence to some. Yet, Parry was possessed of a certain charm and was never known to degenerate into personal insult and profanity which has gained ascendancy in the political discourse on our island in recent times," Gabriel Christain noted.

"In spite of our political debates in a certain forum, in which I suffered the brunt of insults; I sincerely wish to extend my condolences. We debated and insulted each other without animosity or hate…Your body shall remain from whence it came, but I pray that your soul shall rest in peace; gone hopefully, will not be forgotten!" Francisco Etienne-Dods Telemaque stated.

In a statement following his passing, Skerrit labelled Bellot as a "trusted and reliable voice of the Government" who was admired for his professionalism and efficient dissemination of public information.

According to the prime minister, Bellot's patriotic love for Dominica was evident from his many public utterances and his work to preserve and promote Dominica's arts and culture in his magazines and other publications.

"He was an impassioned defender of government policy but was fair and respectful in discussions of public affairs and politics. His evenhandedness and objectivity set the right tone, and should serve as an example of how political matters can be discussed between opposing sides in a reasonable and respectful manner," Skerrit stated.

"Parry Bellot will long be remembered for his enduring love of media and for his contributions to Dominica's development in the field of business and enterprise. May he rest well. My thoughts and prayers are with his loved ones," his statement further added.

His unending passion for media and communication in the 1980s, allowed him to serve as the Press Secretary to the Prime Minister under the leadership of Dame Eugenia Charles -Dominica Freedom Party (DFP).

In a statement sent to the media, the current chairman of the DFP Johnson Boston labelled the passing of Bellot as a "shock" adding that number of Dominicans at home and abroad may have had the same reaction "having heard Parry on the radio not too long ago making his point."

Many including the current President of the Dominica Grotto Home for the Homeless, who Bellot worked alongside for over two decades have commented on the contribution which he has made during his lifetime.

According to Irish, Bellot who at the time of his passing was the Public Relations Officer (PRO) of the 45-year-old institution which is now located in Bellevue Rawle, played a pivotal role in its establishment.

"His passing is a sad loss to the hostel inc particularly as he brought a lot of leadership to the home and particularly as he was very instrumental in funding raising for the home," Irish said."I have worked with him and he is in my view a very kind person, a gentleman who has shown tremendous prowess and wisdom in the work he has done, and in the various capacities he has served and I believe that it is a great loss for the nation."

Since the businessman passed almost three days ago, many organisations including the Dominica Dementia Foundation and the Dominica Association of Industry and Commerce (DAIC) have lauded praises on Bellot, who once served as the executive of both organisations and remained actively engaged up until his passing.

"He's been a member providing support to the chamber from its inception in February 1973. He was one of the strongest supporters of the work of the chamber and he sought opportunities to strengthen the advocacy and visibility of the chambers. He will certainly be missed as he is fondly remembered for his frank expressions for his conviction and also his great desire for optimal national productivity, Stated Executive Director of the DAIC Lizra Fabien

The Sun has attempted to seek comments from Bellot's children and wife, who declined for the time being.

Parry Bellot has left to mourn his wife Claudia, and sons Craig, Joel and Damian.