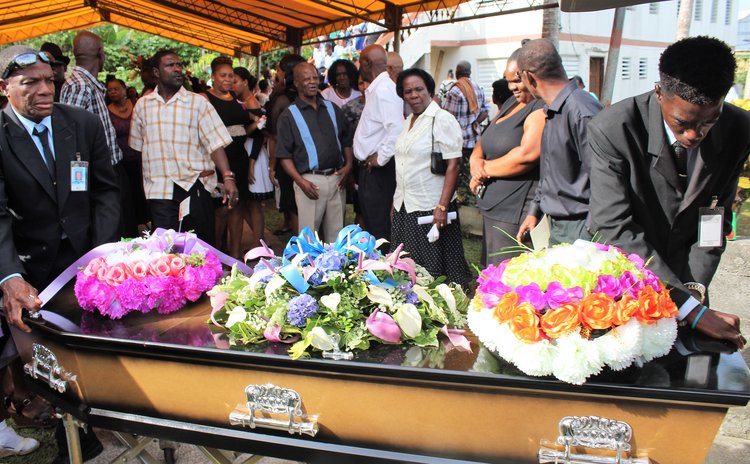 Paul Joseph had been bed-ridden for 24 years but that did not stop him from being a powerful voice in sports, politics and other aspects of Dominican life.

The church was packed with family, friends and well wishes who hailing Joseph as a solider in the Lord's vineyard, a patriot, community man, father, mentor, husband and true friend.

Pastor Randy Rodney, one of the officiating ministers at the funeral service said the late Paul Joseph "a true friend" and added that over the years their friendship grew even stronger. "He would call me at any time to speak to me, seek my advice on any matter. He would often say to me that we will disagree but we will always be friends."

Rodney said agreeing to disagree is something that "we as human beings need to learn, we can and will disagree on matters but that should not affect our friendship."

He added: "I will miss Paul. I will miss his conversations. Paul like a good friend of mine in Trinidad had the liberty to call me anytime; sometimes Paul would wake me up in bed at 5am and say 'Bro, I just want to talk to you'."

Paul Joseph, he told his audience, was bed-ridden because of an accident and he lived for 24 years with that physical disability; "but that did not stop him from doing what he had to do".

Rodney continued: "When he decided to start his radio programme, titled Kingdom and Nation Building Broadcast, he called me and I was excited for him and gave him all the advice I could telling him 'you are having a radio programme on your bed'. Every week he sent me a copy. Anytime you have sold yourself to God there is no telling where you can go. Paul Joseph was as much a man on his bed as he was when he contested election in the La Plaine constituency."

"In my view he was more powerful from his bed than he was campaigning for the Labour Party back then in the elections because he used every muscle he had and it was only possible through the power of the Holy God," Pastor Rodney said