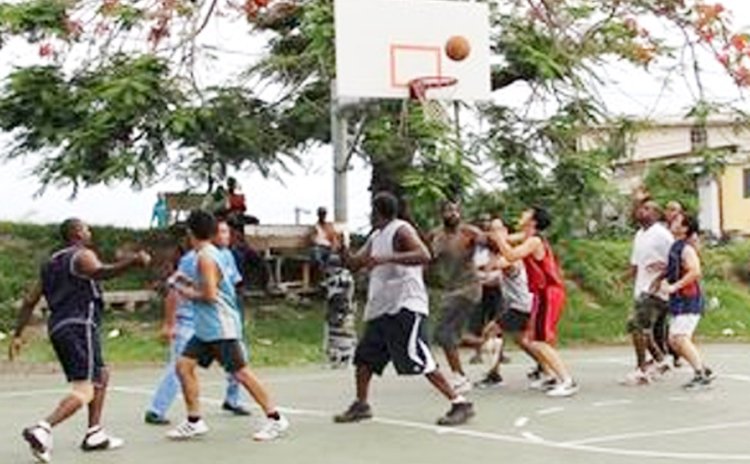 SPONSORS OF GOODWILL TEAMS IN NATIONAL LEAGUE: A number of local private sector entities helped keep Goodwill's basketball teams and by extension Goodwill basketball alive and actively participating in the national league. The teams receiving the sponsorship assistance were distributed in four Divisions: Senior, Intermediate, Junior and Women's, but in some cases the benefactor carried only part of the name of the company or its product.

DID ANOTHER CLOUD APPEAR? One of the earliest editions of Jump Ball was captioned "No Monopoly on Basketball Team Names" with that article focusing on the occasional return/reuse of team names such as Eagles, Raiders, Panthers, Sharks, Falcons, Pioneers, and others in the national basketball league.

Quite apart from the comebacks to the national league staged by Raiders (from Portsmouth) in 2015, and Clouds Senior a few years before, we saw a team named CLOUD from the West Coast village of Salisbury making their first appearance in the national league in 2016, playing in the lower of the two DABA men's divisions then.

It can be said that that a mammatus Cloud piggy-backed upon the name of the Goodwill Clouds teams from yesteryear, but unfortunately – or fortunately - they did not get to compete against any team from Goodwill, which had all disappeared by then.

REMARKS: Without a doubt, the community of Goodwill has made a significant contribution to the development of basketball within the city of Roseau, and in Dominica by extension.

With a history of involvement in the sport that straddles five decades, dating back to the early 1980s and starting shortly after Hurricane David; fielding a healthy slate of 14 teams, some of which captured championships and most being sponsored by the private sector; producing national players; having two of the community's schools participating in the Sports Division's basketball programme, Goodwill has certainly written up a bulging ledger of notes on that community's involvement in what was once Dominica's second most popular outdoor team sport.

Goodwill is one of the island's 'basketball centres' which, along with Grand Bay, Pichelin, Soufriere-Scott's Head, the Roseau Valley, Marigot-Wesley, Portsmouth, St. Joseph, etc. has helped to keep basketball alive on The Nature Isle. As such, teams from Goodwill came and teams dissipated, with some leaving their names etched in the history of the sport on Dominica.

Hurricane Maria in September 2017 dealt a devastating blow to basketball at Goodwill and on the island as a whole. Sadly, while the country's national football, cricket and volleyball leagues are back up and running, almost four years later Dominica's national basketball league is yet to recover from Maria's onslaught, although there have been a handful of competitions that kept the flames flickering. We talk here of the Kelver Darroux Basketball League in St. Joseph; the Ronald Charles Roseau Valley Basketball League in Trafalgar; the DABA-DOC Business League; and the Portsmouth Basketball Association League.

Turning the spotlight back on Goodwill basketball, three decades ago calypsonian De Ency sang in a crown-song, "There'll never be another team like Harlem", referring then to the now 51-year-old Harlem Bombers football team from Newtown. In the same breath, we can say that there will never be another Hurricane Maria. But, will there be another team to match Clouds, or Stormers, or Goodwill Starz, and their popularity? Only time will tell, and that would be when the national basketball league returns. Will we see the Lindo Park hardcourt once again return to hosting some epic basketball battles, rather than facilitating small-goal football?

Jump Ball wishes to acknowledge the contributions made by Roddie, Dowe, Kelsey, 'Maggie', 'Sam', Yannick Bethel and the Sports Division towards the production of this article.