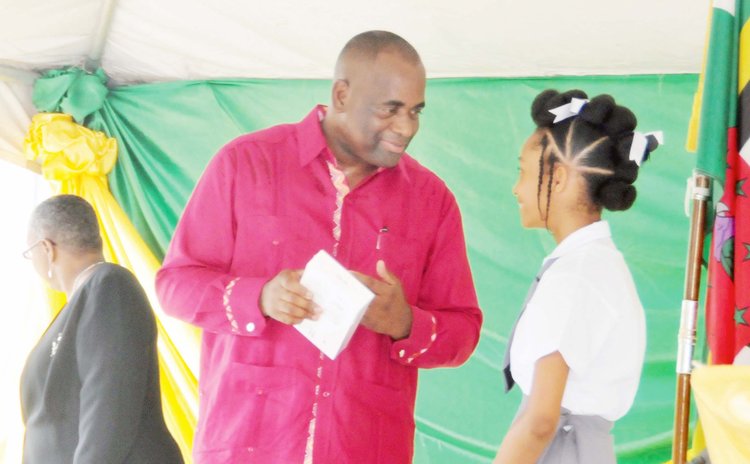 Nine months after an election campaign promise, the ruling Dominica Labour Party began the implementation of its 'One Tablet per Child' programme.

Students of the Pierre Charles Secondary School (PCSC) in Grand Bay are among the first group of students to receive an ASUS Memo Pad 8 Tablet which was donated by the Government of the Bolivarian Republic of Venezuela on September 30.

At the ceremony Principal of the Pierre Charles Secondary School, Jerome Bardouille, said that as Dominica embarks on the recovery efforts post Tropical Storm Erika this 'One Tablet per Child Initiative' will help propel our students to succeed and motivate them in their quest for learning.

"We are well on our way to providing our students with the necessary skills that will equip them to survive in our technological societies as well as for tomorrow's world of work," said Bardouille.

He added that although schools have made progress in bringing computers and internet to the students, greater access is needed for technology to become a reliable tool for teaching and learning.

Meanwhile, Minister for Information Kelvar Darroux said that technology has opened windows of opportunities for us to see and explore the wonderful world.
Therefore, the Government of Dominica has identified the use of Information and Communication Technology (ICT) as a key priority to radically transform and enhance the educational sector.

Darroux added that this initiative will also break the barriers of socio-economic status, whereby some can afford whilst others are left at a disadvantage.

"Every student, no matter which community you are from who your parents are or the circumstances that you have been raised in will receive a tablet," he said.

Darroux then challenged the students to take advantage of the opportunities being offered to them in the field of ICT.

He said that the students should be innovative, utilize skills and talents to develop apps suitable for local markets in order to become entrepreneurs in this field to develop a sustainable future for themselves.

Darroux urged the students to use these tablets wisely to engage in positive and uplifting activities.

"I want to urge each of you to engage in positive and uplifting activities with the technology that is at your fingertips, avoid cyber-bullying, avoid posting inappropriate pictures on Social Media, avoid sites that promote violent behaviour and pornography," said Darroux.
Darroux also cautioned the students that it is their responsibility to care the tablets at their highest standards.

"When you use them do so in the most effective and efficient manner when you store them make sure you place them in an area that is free from harm's way," he said.