After another Dominica diplomatic passport holder lands in trouble, the Roosevelt Skerrit administration is on the defensive once more 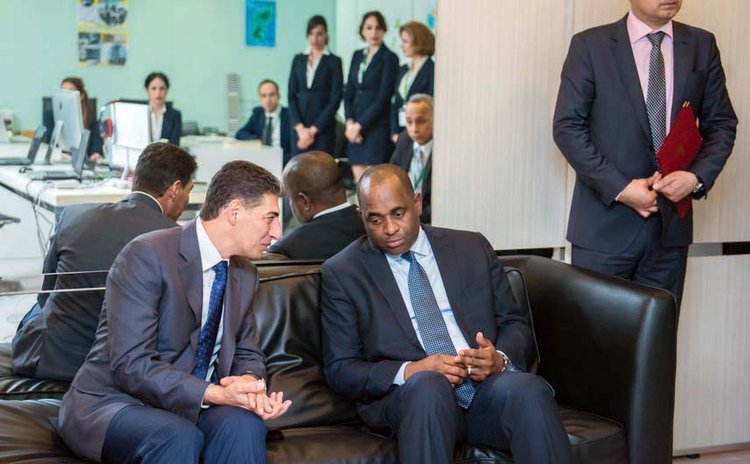 In a case of international intrigue, Government has again been forced on the defensive following the arrest of yet another of its secretly appointed diplomats.

The ministry of foreign affairs last week issued a press release in which it presented "the facts" on the appointment of Iranian fugitive Ali Reza Ziba Halat Monfared, 43, as a diplomat and holder of a Dominica diplomatic passport.

It said Monfared, said to have held several passports, and who "had been living a life of luxury in the Dominican Republic", according to Kenneth Rijock, the American financial crime consultant and confessed former money launderer, was granted Dominican citizenship under the Citizens by Investment Programme in 2014, before he was granted a diplomatic passport on 13 March, 2015.

"Prior to becoming a citizen a comprehensive due diligence investigation was conducted in 2014 in respect of him by an internationally recognised U.S. due diligence firm as required by the relevant regulations. Mr. Monfared's due diligence report showed no areas of concern in any jurisdiction or country including Iran, and he passed all other security checks. Additionally, the report found no pending legal or other matters against him anywhere," the statement said without naming the firm concerned.

However, a lengthy international manhunt had been on for the Iranian, accused of helping to embezzle billions of dollars while the country evaded international oil sanctions and had managed to escape extradition at least once when he was briefly detained in Malaysia, the head of Iran´s international police department Masoud Rezvani told the Iranian news agency, Mizan Online.

Iranian authorities say he had worked alongside tycoon Babak Zanjani, who was arrested in 2103, two years before Monfared was given a diplomatic passport, and was sentenced to death last year for pocketing $2.8 billion while helping the country bypass sanctions.

"He had close contacts with the main individuals in the great oil embezzlement file and was handed to the judiciary," Rezvani said of Monfared, who was arrested in the Dominican Republic, transported to Cuba, then sent to Iran via Russia.

This unusual route was chosen possibly because the United States Department of Justice has a sealed indictment waiting for him should he pass through or even over, the US or any of its territories or possessions and would have wanted to detain and question Monfared, Rijock said in a widely published column.

Monfared's diplomatic passport was recalled and cancelled and all official ties with him were severed since January 20, 2016 after information surfaced "that he may be a person of interest to authorities", the foreign affairs statement said.

It did not disclose how the information became available or which authorities were interested in him, neither did it say if Dominica played any role in his eventual arrest.

However, having secured his diplomatic passport "through a personal relationship with the country's prime minister, Roosevelt Skerrit", according to Rijock, Monfared was being protected by the Dominica government, the opposition leader Lennox Linton has charged.

"I am suggesting to you Matt that this government is involved in an elaborate cover-up on the behalf of Ali Reza Monfared . . . because the evidence that they're presenting is suggesting that very clearly that the authorities, the Iranian authorities, had made their interest in Monfared known to the government of Dominica prior to January 20, 2016," Linton told Matt Peltier on the opposition leaning Q95.

"The evidence from the ministry of foreign affairs suggests the government was harbouring and protecting a fugitive from justice in Dominica and for that reason alone they must resign and they must resign now," he said without backing his claim. The ministry of foreign affairs said it was convinced that all procedures were duly followed and proper due diligence conducted before Monfared was granted citizenship, and clearance given for his appointment, suggesting there was nothing untoward before he became a Dominican diplomat.

Similar assurances were given after former Nigerian minister Diezani Alison-Madueke was detained by British police in 2015 on suspicion of bribery and money laundering.

Skerrit said at the time she was "in good standing in Nigeria and United Kingdom" when they first met in May of that year, although the UK's National Crime Agency (NCA) had confirmed that an investigation into Alison-Madueke and four other people had begun two years earlier.

"The investigation commenced in 2013 under the Proceeds of Corruption Unit, and transferred to the NCA earlier this year," the NCA said.

Reports on charges against Alison-Madueke had been widely reported globally, and she was indicted by the house of representatives over a fuel subsidy scandal in which billions of dollars went missing while she was petroleum resources minister.