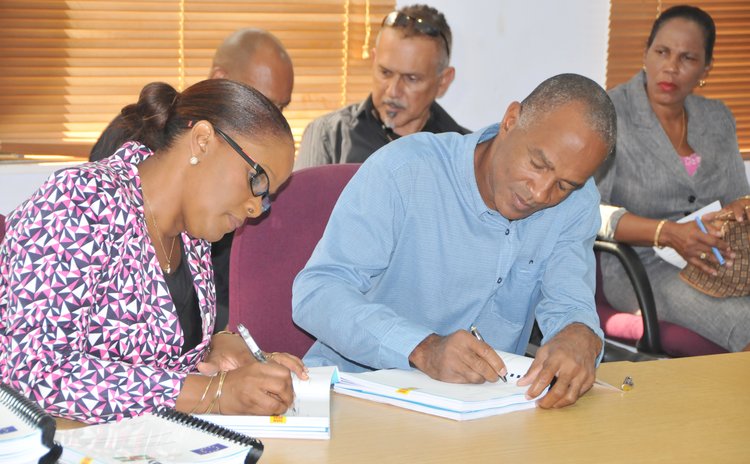 Government and four contractors have signed four contracts valued at EC$20 million for the rehabilitation of ten feeder roads across the island.

The funds for implementing the projects was provided by the European Union and the Government of Dominica and the contract papers were signed with four tenders at the Ministry of Finance Conference Room on May 6.

The fourth contract was awarded to a local company for improving access to the Londonderry tissue culture weaning and hardening facility.

Carleen Roberts, national authorising officer for the European Union Development Fund said that ten feeder roads will be rehabilitated from 4 out of the 7 agricultural regions.

"It has taken much time, negotiation, understanding and support as well as very long gruelling hours by those directly involved to achieve this milestone," she said.

She said the staff of the Division of Agriculture has developed production plans for each of the targeted areas.

"None of us expected Tropical Storm Erika which significantly impacted many of our feeder roads; understandably the target set by the Ministry of Public Works will have to be reviewed," said Roberts.

She added that the contractors are to complete the work on the feeder roads within 12 months.

Johnson Drigo, the Minister of Agriculture and Fisheries called the road rehabilitation programme under the EU Banana Accompanying Measures (BAM) "a major milestone."

He said that the investments made towards he feeder roads will benefit approximately 5,072 farmers and provide access to 16, 092 acres of productive land.

"This will provide a quantum leap in the sector…the Ministry of Agriculture will ensure that the farmers are able to operate under the best of conditions," he said.

Drigo urged the farmers to take ownership of the roads when they are completed.

"You must take ownership of these