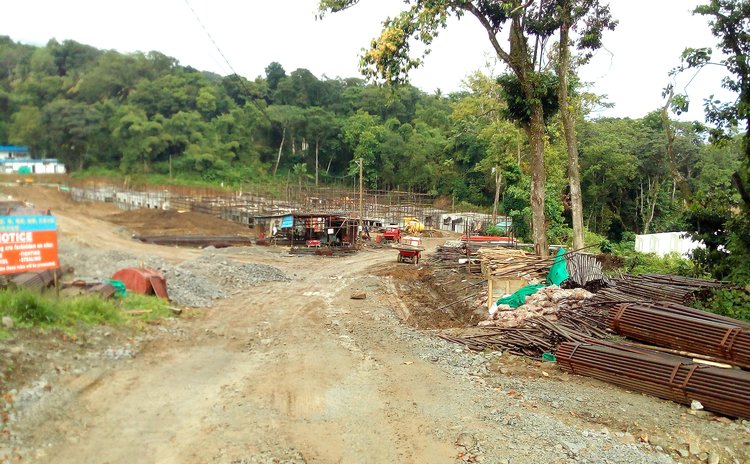 Displaced Petite Savanne residents with concerns about being unable to farm if they resettle at Bellevue Chopin need not worry.

Chairman of the Petite Savanne Resettlement Committee, Lucien Blackmoore has confirmed that Government is considering agricultural land options as part of the relocation project.

The resettlement of Petit Savanne villagers was necessitated by Tropical Storm Erika's destruction of the village in 2015. Government subsequently declared the area dangerous and uninhabitable.

Since then, several villagers publicly expressed concerns that they might not be able to farm at their new homes at the resettlement site.

"Of course, now that we seem to comfortably have the residential aspect under control, more attention and focus will be given to the livelihood issues," Blackmoore said.

He disclosed that Government is considering lands in the Moropo Macaton area, as well as a site formerly known as Bedminister Estate in Grand Bay, for allocation to resettled villagers for farming.

However, Blackmoore noted that these lands are privately owned; therefore, Government will have to buy them from the owners.

Nevertheless, Blackmoore asserted that the $100M project comprising 340 residential units, communal and commercial facilities is moving ahead on schedule.

An initial 201 housing units are carded for completion by December 31, 2017 while the entire project should be completed by August 2018.

Elaborating on the project plan, Blackmoore said the Bellvue Chopin health facility had to be upgraded and the school expanded, to cater for the enlarged population.

As part of the commercial component, there will be a commercial facility featuring shopping outlets, vending booths and work areas for trade-people.

In addition, there will be a farmers' market, a disaster/emergency response building and community centre.

"We are about 30 percent completed. . ." Blackmoore stated, adding that infrastructural works are in progress on drainage, retaining walls and utilities.

He referred to Government's commitment to 'build back better' after Tropical Storm Erika, noting that the relocation site is designed to be a model residential, urbanized area.

"Things are going fairly smoothly," Blackmoore said, adding, "From all the assurances and the progress being made on the ground, there should be no doubt whatsoever that December 31, 2017, we will see the completion of the first 201 units."

He identified bad weather as a leading challenge because Bellevue Chopin is a rainy area. Another setback is the timely procurement of materials and services.

He explained that suppliers of concrete and cement had to make special arrangements to ensure they could meet the demands. And one of the contractors had to bring his own concrete batching plant and concrete trucks.

Blackmoore noted that the 'build back better' programme included identifying 10 potential relocation sites that are relatively free of natural-disaster hazards.

With assistance from the United Nations Development Programme, an engineering team from the University of the West Indies conducted hazard assessments of all the sites, he said.

Addressing concerns that the Petro Casa houses sourced from Venezuela are PVC buildings, Blackmoore described them as detached bungalow-type structures made of concrete poured into PVC moulds.

He maintained that precautions are in place to ensure the basic functionality, comfort, safety of every housing unit and, as such, their security is not compromised in any way.

However, Government is providing 340 residential units free of charge to those who owned homes in Petite Savanne or owned land with the intention of building.

Blackmoore said the identification of beneficiaries is based on information from a resettlement committee formed by Petite Savanne residents themselves, shortly after the storm.

Approximately 50 persons have not yet moved from Petite Savanne and Blackmoore said they will still be given houses, provided that they fit the eligibility criteria.

"Clearly there are other regulatory and legislative decisions that Government has to bring into the making as to how they treat with Petite Savanne-- the land itself. . .

"This is a work in progress. . . something beyond the resettlement committee. . . what sort of uses the land will be put to again is something in the consideration of the government," Blackmoore said.

He added that provisions have been made for the best quality accommodation, therefore, only government-approved alterations to the buildings will be permitted.

"It's very likely we wouldn't have to deal with too many of those instances as the buildings would be given all the necessary amenities and functionalities," he remarked.

The chairman emphasised that the displaced villagers are being consulted on every aspect of the resettlement project.

Meanwhile, Government continues to pay the monthly rent for hotel rooms and other temporary accommodation for them.