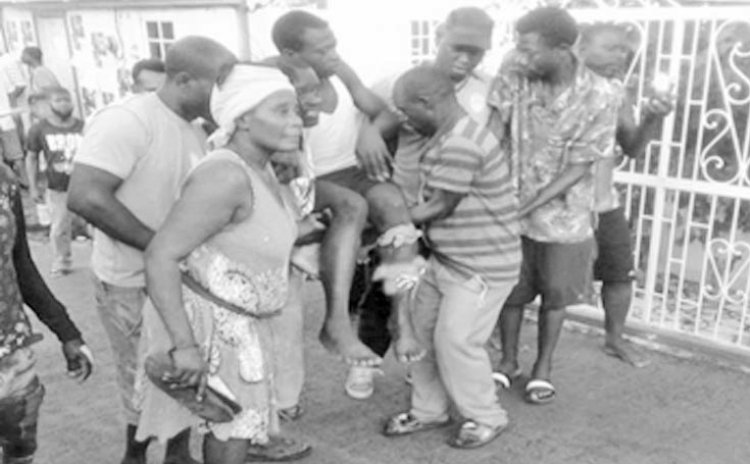 Is there a discipline problem in the ranks of the entire Police Force? In February a young man lost his life while in custody. While dozens of cell phone cameras were rolling, an officer was seen kicking a middle-aged woman and another punching her son in front of Police HQs in the presence of senior commanders. It has been reported that there have been numerous alleged complaints of cases of police brutality and harassment of citizens daily.

On April 12th viral videos showed several Police officers mercilessly kicking, punching, slapping, gang tackling, and violently detaining a man without probable cause and unprovoked during the emotional Bus Drivers' protest in Canefield. If the current trend continues, are assassinations, disappearances and/or extrajudicial killings next?

In March 2021, two realtors who were reportedly using a drone while looking at a property for a client were arrested at Morne Daniel near the highly controversial and lavish residence of the current Prime Minister. After they were picked up by police units, they spent two miserable nights in dirty and smelling holding cells on initial charges of espionage under the State Security Act chapter 14:02. The men were dismissed with no charges being filed. Due to the shameful embarrassment, the government said that it will be enacting some very strong and clear statutory rules and ordinances where the flying of drones is concerned.

In August 2020, Police arrested Opposition Parliamentary Representative for Roseau North on the public road close to that same controversial residence in Morne Daniel. In spite of the fact that the area is part of the representative's constituency, he was apprehended on bogus trumped-up charges for allegedly posing a threat to the residence. He was humiliated and subsequently released without being charged.

On the eve of the last election in December 2019, heavily armed Police units backed by Regional Security System (RSS) troops with submachine guns and battlefield weaponry, conducted an operation at 4 a.m. on the opposition's strong-hold western agricultural village of Salisbury. Without warning, tear gas was dislodged into the small homes of the elderly, the sick, babies, and the innocent, and two people were shot by Police. RSS troops in Dominica in December 2019

During the previous days, the primary road on the outskirts of the small village which is the main commuter route between the two main cities of Roseau and Portsmouth was blocked. It must be noted that there were no protest actions and the roads were cleared when the police and troops ambushed Salisbury without mercy, pity or consideration in the early morning hours. Is this democracy or demo-crazy?

In places like Salisbury and Margot, citizens took to the streets in early December 2019 to express grievances that had accumulated over many years dealing with alleged corruption in the government, particularly as it relates to political imbalances in Dominica's electoral process. Citizens were clamouring for much-needed reform and several protests were held around the island.

The Police must be placed on notice that their actions are being monitored closely by the UN Committee on Human Rights and other bodies. During the Committee's meeting in March 2020 in Geneva, the Committee asked Dr. Vince Henderson, Dominica's Ambassador to the U.S and OAS about Dominica's frequent use of State of Emergencies, bullying strategies and its broad definition of the 2018 Anti-Terrorism Act.

The Committee expressed concern that the Act might be used as a tool to intimidate, use force against the political opposition, and on the infringement on the right of free assembly. The committee also wanted to know if there were there any guidelines regarding the use of force in the police force and is there an independent oversight of police action and how did it function?

Committee experts challenged the Ambassador to explain why Dominica has never appointed or filled the position of Parliamentary Commissioner to investigate complaints made against the Government and police. His response was that there have been discussions for the potential establishment of a Rights Institution in Dominica (in accordance with the Paris Principles) and the appointment of a Commissioner.

But since the ratification status to the International Covenant on Civil and Political Rights was signed by PM Dame Charles in 1993, it has been 27 years since Dominica submitted a report to the Committee. This exercise should occur every four years. Dominica did not submit a report for the March 2020 meeting but instead answered questions.

The committee hoped (as other countries fulfill that obligation) that Dominica had submitted a report months before the proceedings. The report and adhering to timelines agreed would give committee experts and members sufficient time to study the report and engage in constructive dialogue regarding the fast, frightening, and deteriorating human rights situation in Dominica.

When will that UN required and much-needed Human Rights Committee be established and its Commissioner be appointed in Dominica? If and when that occurs, the Commissioner should be highly qualified, politically neutral and unbiased and an independently minded professional who will pledge to follow the letter and spirit of the law.