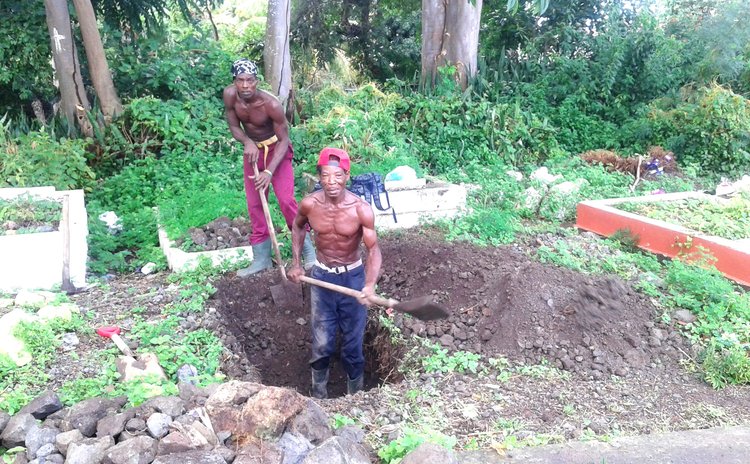 Gravediggers at the Roseau Cemetary

Grave diggers at the Roseau Cemetery who work for the Roseau City Council (RCC) are demanding more money for digging holes in which the dead are buried. Otherwise, they say, they will hang up their pickaxes and hoes.

Currently, the diggers are being paid EC$150 per person per hole. Grave-digging sounds creepy, but it's a job that must be done.

Clayton Hector, is lead spokesperson for the diggers who has been a grave digger for the past 12 years and has seen the fee move from $75 to $100 to $150 says he finds for the amount of work involved in digging a grave and preparing it to bury someone, that amount is just way too small.

"The council is paid $600 for the digging. Sometimes we have excess work like stones to remove and even tree roots to deal with. Yet they have to take from the money so the amount that we are being paid is unjust and unfair plus we are not provided with tools, we have to come with our tools to do the job," Hector said.

Hector says that digging a grave is not "a dark and sinister job", but rather an act of respect for the dead. He said usually gravediggers don't know anything about the deceased and they have little or no personal contact with the family which makes the job easier. However, he says, to be a gravedigger, you must be comfortable with death.

"As long as you are a positive person that celebrates life, you won't have any problems," he said.

His friend Phillip Charles who is new to the job describes the pay as "pittance."

"The money is just small…very small. We are working hard and we need a raise, we are not pressing them but we are saying deal with us fairly. People might think is big money we are getting, but no, lots of people have said they will talk to the council on our behalf. Sometimes some family members have pity on us and give us something on the side," Phillip said.

But Irene John, the Mayor of Roseau, describes the gravedigger's demand as "unfair and unjustified". She said recently she met with the men and ensured that they were given a raise of 50%.

Acting City Clerk Irma Augustine added that the grave diggers received an increase in July 2016. She added that the Council charges a fee of $600 per grave but "some people pay it while others ask the council to help them".

However, Hector is not impressed and warns if they do not take a closer look at the fees he will take action; he threatens to go on strike.

"The money must be paid to the Roseau City Council before we dig the hole. If I see how they are going on by next year I will take action because they are not doing for people to work for them. Trust me. I might strike for more pay in order to get them to understand the message. They are lying to tell you that sometimes people pay them less and government sometime does not pay," he said.

He continued: "They are not doing a piece of work and they getting all the money. We have lots of space in the Public Cemetery and the Catholic Cemetery. I am the one who knows the place and where to locate the graves to bury the people. Without me they are doomed and they not respecting us. They are not fair to us. Imagine they say that we are on contract but they are taking tax and Social Security and sometime we don't get our money at fortnight because they claim no money and don't want to pay us and not the others. So we then have to wait till month end for money," he said.