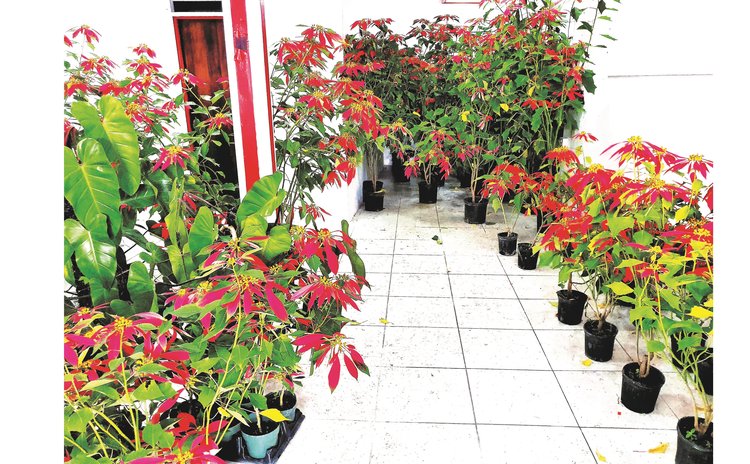 The Christmas season brings with it the added pressure of purchasing the perfect present for that special someone. If you are running short on ideas, then Green Mountain Products (GMP) may be the solution you're looking for.

GMP, formerly Green Mountain Flowers, specializes in cut plants and potted plants. It is now exploring mushroom production hence the name change from flowers to products in 2020. The company saw the need to expand its product line to other things but keeping within the agriculture realm. GMP, which will celebrate its 21st anniversary in January 2022, has become a staple feature at Christmas time in Dominica.

Owner of GMP, Daryl Phillip, told The Sun its signature poinsettia made its impressive debut on the local market 16 years ago.

Unfortunately, importation of plants became problematic firstly with AmeriJet no longer flying into the country, later the impact of Hurricane Maria, and finally the COVID-19 pandemic. This triple hit forced the company to look internally towards the production of its trademark Christmas plant.

"So last year I started to look at local poinsettia plants instead of potted ones and they did very well. In fact, I find the local ones tend to be a little more attractive," he said.

In addition to the poinsettias, GMP has a number of other decorative plants in its Christmas line including spathyphylliums, anthuriums, three varieties of orchids, and philodendrons. Next year GMP plans to bring in different plants between January and February, to begin the process of growing new, ornamental house plants for the festive season.

Preparing for the Christmas production happens several months in advance which can make the entire operation a hit or miss as situations may develop or change ahead of December.

"I have to plan it nine months in advance not knowing whether things are going to be better or not, and I might overproduce or underproduce. So it is a kind of hit or miss situation but with agriculture, you need to make a plan, when you make that plan for production you also have to have a sales strategy to get that done," said Phillip.

This also begs the question: why import the plants in the first place?

"When I need 200 spathyphillums I cannot exactly go and collect them outside. When you get plants in as tissue culture plants that are uniform then start growing them you get some nice uniform leaves and once you take care of them you will get a perfect plant," he added.

The price range of these quality plants from GMP is $25 to $150. Phillip says he has noticed a decline in purchases over the years due to the economic situation in the country.

"Money is a little tight right now and people do not have the spending power, it's obvious. But they come in and they like them. And before when they used to take three and four plants they take one or two," Phillip said.

Despite the tougher current economic environment, The GMP owner is firm in his belief that a potted decorative plant is the ideal Christmas gift for anyone.

"It will last a long time, it will create immediate Christmas cheer in your house and if it is not a seasonal plant like the poinsettias are then you have it all year round and there is nothing that really decorates a house more than a nice plant," he said.

GMP is located on the Giraudel backroad with an outlet on King George V Street, in Roseau, downstairs Bernard Wiltshire's office, opposite the Dominica National Lottery's office.