Gregor, What do you mean by"I hope Dominica recovers. I fear you may not"? 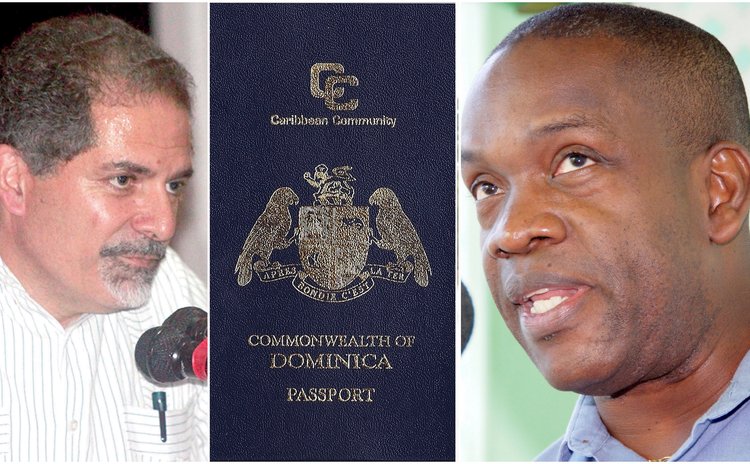 Left to right:Nassief, passport and Linton

I understand you are the Head of Roosevelt Skerrit's strategy committee for the assassination of the character of Lennox Linton in the wake of the January 01, 2017 edition of CBS News 60 Minutes and I therefore presume it is in that capacity you asked me the following question in your Open Letter:

"How could you go on a news program watched by over 12+ million American viewers and portray your island – our island – as a rogue nation selling passports "mail order" (suggesting you can buy a passport like you buy a pair of shoes on Amazon.com), and worst, suggesting that we are selling them to criminals"?

For the avoidance of doubt, as a citizen of Dominica by birth, a parliamentarian representing the people of Marigot and Leader of the Parliamentary Opposition, I agreed to be interviewed by CBS News 60 Minutes for a story on Citizenship By Investment in the Caribbean. I did not ask for specifics on viewership to determine whether there was need to have them reduce the numbers from 12 + million Americans to 12 + hundred Dominicans to better suit the tourist and passport selling interests of you and other operatives of the Skerrit regime.

I did not portray Dominica as a "rogue nation". That description emerged from your perception for which you must accept full responsibility. Note well, I am not asking how you could say or write that about Dominica.

It was Steve Kroft, the CBS News 60 Minutes Correspondent who suggested in a question that since passport purchasers could pay for their passports from wherever they are in the world and did not have to show up in Dominica to receive them, then it was "sorta mail order citizenship". I said: "Sort of. Something like that". In the CBI program as is the case in the mail order business, there is no face to face contact between buyer and seller in the exchange of goods and/or services for money. So Gregor, your embarrassment with the inconvenience of this fact doesn't make it any less true that there are similarities between buying a Dominican passport and buying a pair of shoes on Amazon.com.

I did not merely suggest that we are selling passports to criminals. I stated as truth and fact that "We had a diplomatic passport in the hands of Francesco Corallo, who, at the time, was on INTERPOL's list of most-wanted criminals".

Since Roosevelt Skerrit became Prime Minister in 2004, Dominica diplomatic passports have (ended in the hands of) scoundrels, fugitives, tax cheats, fraudsters, money launderers and racketeers. You know only too well that this is the gospel truth but you engage your blind eyes and deaf ears as this guild of rogues compromises our international diplomacy to entrench itself as the single biggest threat to the integrity, safety and continuity of the CBI program.

Gregor, take your head out of the sand. Our country is indeed run by a criminal enterprise that has mercilessly abused public office for private multi-million dollar gain. You have decided and remain adamant that you are too blind to see the evidence, but I am sure, in order to justify not writing an Open Letter to Skerrit you will continue to ask for what stares you in the face each and every day.

Under that criminal enterprise, the Citizenship By Investment Program has been mismanaged and corrupted to become primarily a source of funding for Labour Party theft of elections and wealth creation for a chosen few while thousands of young people cannot find jobs; small business owners, farmers, construction workers and service sector employees are catching hell; health care is in decline and students at UWI cannot graduate because their government (swimming in passport millions) has not paid the agreed UWI economic cost.

Dominica cannot be dependent on "tourism as a major pillar of economic development", it cannot "desperately (need) investment in new projects to create jobs", it cannot be expecting international assistance because it "was left so fragile after Tropical Storm Erika" and not recognize and accept it has a moral obligation to responsible behavior for the advancement of global civilization. Our country, Gregor, has no absolute right to engage in behaviors (like under the table sale of diplomatic passports) that endanger the security of other nations – the same tourist markets we are relying on - with the excuse that such behavior is driven by economic necessity.

Instead of ridiculing and crucifying me for speaking incontrovertible truths on behalf of the poor people of this country to "the most successful television broadcast in history", send an Open Letter to Skerrit asking him to follow my example and accept the invitation of CBS News 60 Minutes to tell his wonderful story of CBI truth and fact to a global audience and thereby begin to repair the international image of Dominica that his leadership actions have savagely brutalized.

Good luck with the various battles you claim to be fighting. I have been fighting for some of these very things like "increased competitiveness of our investment framework" since the gentler days of the early 1990's when we played scrabble at my house sometimes until the wee hours of the morning. You didn't question my judgment on matters of public interest based on truth and fact at that time; but you are criticizing it now.

With all that you had going for you at the time - excellent entrepreneurial vision and outstanding technology skills and competencies - I never saw you as candidate for membership in the gallery of apologists committed to deifying a corrupt prime minister hell bent on dictatorial control. I never saw you as heartless, selfish and insensitive, but your untenable position in this matter and your attack on the rights of the people of Salisbury to protest for their rights have exposed the extent to which, in protection of your tourism profits and windfall passport money, you are now willing to throw fuel on the misery that is burning away the lives of poor people and their children in Dominica.

Like you "I would never deliberately go onto a world stage and air what I consider to be my perception of our nation's dirty laundry". And to be clear, I did no such thing on 60 Minutes. Unlike you though, I will not lie, I will not spin and I will not cover up skullduggery in defense of anyone ... who is methodically spreading ignorance and poverty among the powerless to hold their government to ransom indefinitely.

You ask, what do I want?

You conclude your letter with some disturbing statements:

"I hope our CBI program, after being in existence for 23 years, survives this. Now, more than ever, our country needs it… I hope Dominica recovers. I fear you may not".

Gregor, what exactly is it that Lennox may not recover from and why? Those who do not recover, or fail to recover from whatever, end up dead. Do you have a plan for me? Is this a new, craftier version of the execution threat against Lennox and his family being peddled by supporters of Roosevelt Skerrit?