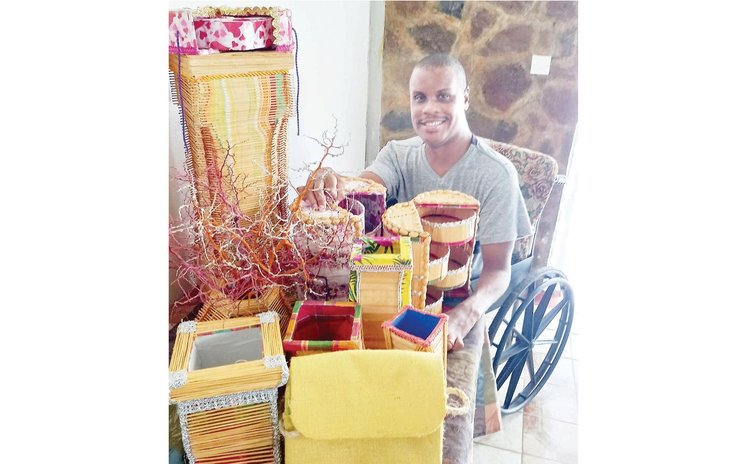 With his craft, Gregory Royer

A young farmer in the making who had life throw him a serious curveball has made a name for himself despite what may seem to be insurmountable challenges.

Gregory Royer of Vieille Case, who now lives in Elmshall, was only 16 years old when he was involved in an accident that changed the course of his life forever.

Royer, who attended the Vieille Case Primary School always wanted to be a farmer.

"Always going to the garden with my dad, my parents. I always wanted to follow in my dad's footsteps and be a farmer," he said.

He fondly reminisced on growing up in Vieille Case.

"It was real unity, that's what we knew, everybody lived together, enjoying everyone's company, playing cricket, football, going to the river, going to the sea, going to the garden," Royer said.

Royer grew up with three brothers, one sister, and his parents. Important values were instilled in him from a young age.

"Respecting your elders, keeping Vieille Case clean, helping one another. There was unity among us, there was no division, everybody looked out for each other," he said.

Unfortunately, his dream of becoming a farmer was cut short when, on 02nd September 1987, he went to help the then member of parliament to harvest bananas and was involved in a vehicular accident which left him disabled, a paraplegic, for the past 34 years.

"After my accident in 1987 I spent a month at the Princess Margaret Hospital and about eight months at the Portsmouth hospital," Royer said.

While one may be disheartened by such a prognosis this was not the case for Royer.

"The support during that time was always good and moving back to Vieille Case after being discharged the support from family and friends was great," he said.

Royer was not deterred by his disability and did his best to make the most out of his situation. He then turned to art.

"I developed art skills from about a year or two after my disability, in 1989 and I keep on improving doing my artwork, every day, learning new things, practicing new things and see where it goes from there," he said.

His talent has grown in leaps and bounds since then as he now produces more sophisticated pieces.

"The artwork that I do presently, the craft part of it, I started it after Maria doing jewelry boxes, bags, purses, vases, basically anything I could lay my hands on," Royer said.

Royer, who showcases his work on his Facebook page under 'Gregs Royer' admits that surviving in the creative industry here can be quite challenging.

"Doing art here is very difficult because the supplies you need for your art it's not cheap. You have to factor in the cost of the material you buy to the selling price, you are basically always working at a loss," he said.

Despite his limitations, he still thrives, as he wisely told The Sun "it's not what you want to be or what you might have been, it's basically who you are and that's what I have been living with for the past 34 years."

Royer, now 50, moved to Elmshall in February 2020 with his wife of 12 years. He takes pleasure in doing simple things.

"Overcoming the challenges I face on a daily basis, it's basically being strong-minded, knowing what you can and cannot do. With the help of my wife, as one man told me once it's not my other half it's my other whole," he said.

What's next for Gregory Royer?

"What's next is seek proper, comfortable housing, I have applied for one of the government apartments so I'm waiting and hoping it comes through," he said.

This skilled craftsman is encouraging other challenged individuals that being disabled is not the end.

"Find your dreams, find what you can do, find how you can be useful to society… and do it to the best of your ability," he said.

Royer also has a message to the general public regarding people with disabilities.

"We are all humans, physically we are challenged, created by the same God who created you able-bodied. Treat us equally, treat us with respect as we treat you with respect and just see us as human," he said.