Dominica's among five Caribbean countries where tourism arrivals were worst in 2015 than 2014. And that's before TS Erika 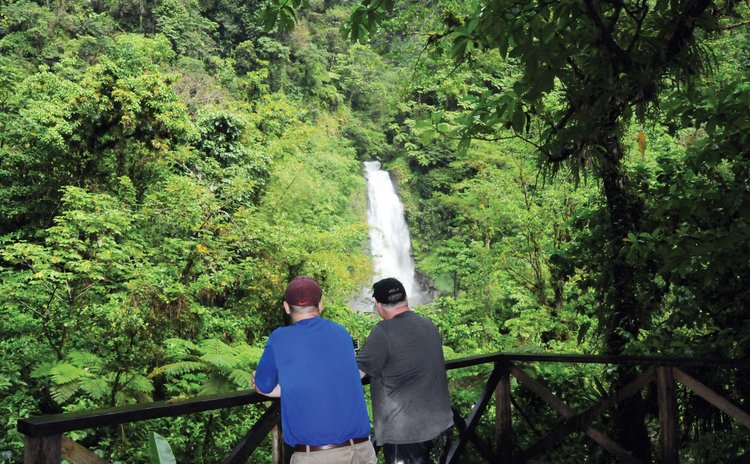 Two tourists look at one of the two Trafalgar waterfalls

While Caribbean tourism took a giant stride forward in 2015, Dominica took a step back.

Figures released last week by the Barbados-based Caribbean Tourism Organization (CTO) revealed that Dominica was one of only five of 30 countries whose tourism arrival numbers were worse last year than in 2014. The others are Antigua & Barbuda, Bermuda, Martinique and Suriname. In addition, cruise numbers for the year were down 2.5 per cent to 279,341 visits.

The 0.3 per cent drop in stayover arrvals - 48,154 tourists– was for January to July and did not take into consideration the devastating hit that the country took from Tropical Storm Erika and the subsequent decision to cancel the World Creole Music Festival. This means the situation is expected to be even more grim when the final numbers are revealed.

The minister of tourism Robert Tonge did not comment on the country's performance, telling The Sun that he would issue a press release, which had not been received up until press time.

However, hotelier Athie Martin said the numbers were not surprising. "What is being revealed blatantly is the overall inability of the management group of the country to have a strategy that can be executed. So whether its's storm recovery, or Black Sigatoka, or stimulating arrivals, or whether it's the young people that you are just shoveling through universal education – it's like shovelling through and at the end you fall in a pit," Martin told The Sun. " So the evidence is there is no body in control."

The environmentalist held little hope for a quick recovery, pointing to glaring signs of the scars left by TS Erika as proof that the situation is hopeless.

"You had a storm nearly six months ago and when you drive around the country you can still see the effects of the storm – and this is a main thoroughfare. There is no evidence there is a plan."

Martin complained that the Roosevelt Skerrit government was placing less and less attention on tourism or other sectors and was putting all its hopes in "the least common denominator", the sale of passports and whatever assets the country still has.

"They have made the sale of the country the means to finance the country," he said. "It's like a snake eating itself and in the end there is no snake left."

He spoke of tourism and the country on a whole being stuck "on a road to nowhere" and of a country feeding on itself with very little left to eat.

The fall in tourism numbers, he suggested, was symptomatic of the malaise that has gripped the country.

"It goes beyond the notion of a failed state, it's a disappeared state. So it's a place on the map but not a country. In the end, it's not even a place that people will want to come to."

Martin said in order to improve arrivals, the product must improve. He spoke of a poor health care system, failing agriculture, diminishing expertise and a lack of interest in the development of the island's human resources.

Unless these and many other issues that face the country are resolved, tourism will go nowhere fast, he concluded.

"What's next? There's no shortcut. If we have to make this place attractive for people to come and have an experience, we have to make it attractive to those of us who live here. For us to think of a hospitality industry that is different from whoever lives here you're making the same mistakes," he said.

Martin recommended protection of the environment and the country's natural resources, insisting that "we must protect our rivers in the same way Barbados protects its beaches."

But he was worried that nothing of note would be done to remedy the ailing tourism industry, fearing that when the numbers are released at this time next year, they will show more of the same, with the country taking another step back.