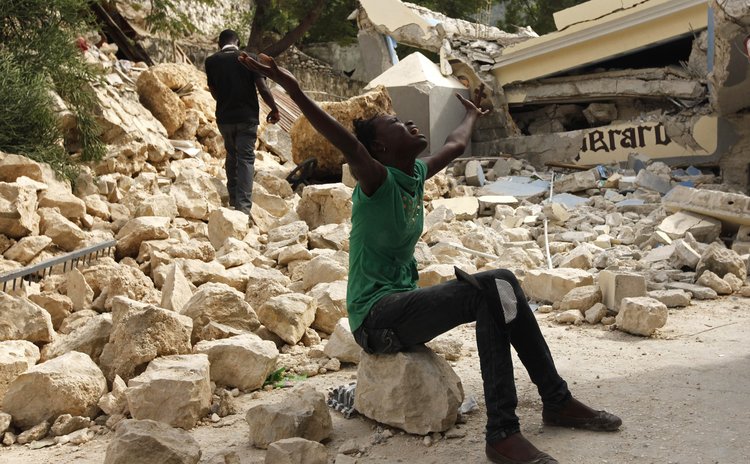 Haitian woman after the 2010 earthquake in Haiti

SANTO DOMINGO, Jan. 12 (Xinhua) -- Haiti marked the fifth anniversary of the devastating January 2010 earthquake on Monday amid a political crisis and housing shortage.

President Michel Martelly, who declared Jan. 12 as "Day of Reflection," led the official commemoration, calling for unity of the country.

The prolonged political crisis in Haiti darkened the commemoration on Monday, and Martelly asked his countrymen to "give an opportunity to the country on behalf of the victims."

"A person can not change the country, but together we can do it," said Martelly during a ceremony held eight km north of the capital.

Haiti has long been grappling with the major challenge of a protracted political crisis, which continued throughout last year and led to weak governance of the country.

An on-going political crisis between Haiti's president and the parliament is undermining the country's political stability. The terms of two-thirds of the Senate and the entire Chamber of Deputies ended as of Monday, leaving the legislative branch to dissolve.

The date for an upcoming legislative election has not been set.

Haiti's private AlterPresse news agency reported that Martelly signed an agreement with leaders of four opposition parties on Sunday, hoping an electoral law could soon be passed and the date for a legislative election be set.

The agreement called for "doing everything possible to re-establish confidence in the institutions and holding elections ... before the end of 2015" for the senate, deputies and the presidency to avoid an institutional vacuum.

Addressing the slow reconstruction efforts, Martelly complained that Haiti has received only 4 billion of the 12 billion dollars in aid pledged by the international community.

He also urged countries to provide aid directly to his government, instead of distributing it through aid agencies and non-governmental organizations.

About 1.5 million Haitians were forced to live in makeshift shelters during the rebuilding process, and despite billions of dollars of international aid, about 80,000 people or 21,218 families were still living in 105 existing camps, said an international organization last week.

"Five years after the Jan. 12 earthquake, housing continues to be a major challenge for the country," AlterPresse news agency said Monday.

What headway the government has made was temporary, because "only 20 percent of the housing resolved can be considered sustainable or long term," housing activist Reyneld Sanon told the agency.

"The government's plans haven't brought great satisfaction to the victims," he added.

A 7.3 magnitude earthquake hit the country five years ago, shattering much of the capital Port-au-Prince and killing more than 300,000 people, according to official figures. It left an already poor country even more depleted, with losses of nearly 8 billion dollars.

According to the UN World Food Program, five years after the quake, some 3 million Haitians remain unsure about where their next meal will come from.