Haiti will rise out of the rubble, again 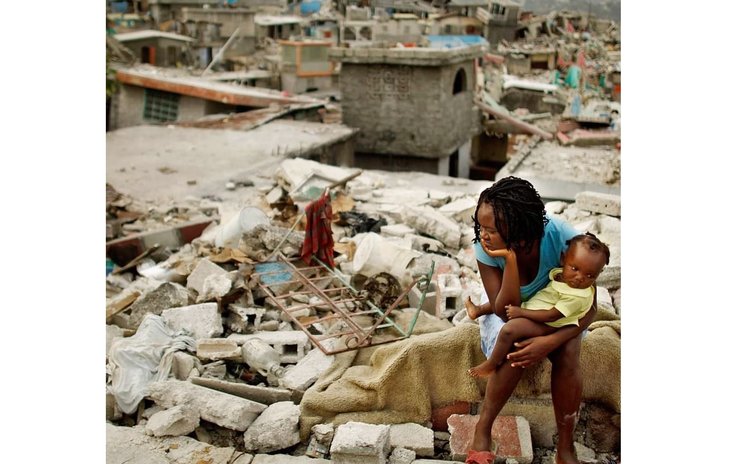 Woman and child sits on rocks after massive earthquake- Haiti

"Haiti I am sorry

But one day well turn our heads

And look inside you,

One day well turn our heads and

For more than 200 years Haiti has been battered and bruised by both man and nature. The social and psychological effects that these forces have had on Haiti are rather obvious.

In January 2010, the capital of that unfortunate country was leveled by a magnitude 7 earthquake creating one of the world's worst disasters. So when we thought the situation in Haiti could not have gone anywhere but up, nature created yet another crisis for that northerly CARICOM country.

Heavy damage has been reported in the cities of Jérémie and Les Cayes, an area that is less densely populated than Port au Prince, where the 2010 earthquake struck, and also more remote. Thousands of homes and a multi-storey hotel collapsed, and some roads and bridges were impassable, complicating rescue and aid efforts.

The disaster could hardly have come at a worse time for the nation of 11 million, which has been in the throes of a political crisis since President Jovenel Moïse was assassinated on July 7. The leader of the killers is still at large.

The unsolved assassination, a leadership vacuum, severe poverty and systematic gang violence in parts of Haiti have left the government dysfunctional and ill-prepared for a natural calamity.

As we write and as Haiti reels from another devastating earthquake on Saturday, the threat of another natural disaster loomed over the island. Tropical Storm Grace, which formed in the eastern Caribbean the same morning, was on a path toward Haiti, according to the National Hurricane Centre. Haiti is therefore bracing itself for massive land and mudslides since the earthquake would have loosened mountains of soil and rocks.

You may recall that in 2008, Haiti was almost blown and washed away by the winds and rains of four successive hurricanes. Can the people of Haiti take anymore? Should the rest of the world abandon this unfortunate country or should we use this latest disaster as another opportunity to create a new Haiti from the rubble? Rebuilding Haiti is indeed a challenge for the United Nations, the Biden Administration of the United States and, most significantly, for Haiti's neighbours in CARICOM.

There are many theories for the sub-human conditions in Haiti even before the latest earthquake. Most definitely it has nothing to do with the practice of voodoo or with deals that the people of Haiti allegedly made with the devil more than 200 years ago, as the Reverend Pat Robertson suggested as the reason for Haiti's calamity in 2010. Robertson, you should note, is the founder of the Christian Broadcasting Network and a former Republican candidate for the US presidency who once suggested that the US should assassinate Hugo Chavez, the president of Venezuela. Some commentators have suggested that Robertson has the unenviable task of expressing the thoughts and sentiments of many Americans for which he gets persecuted. But that's another story.

The point which we wish to stress is that today Haiti is a failed state because of the tectonics of poverty, politics and nature. Before the calamitous earthquake of Tuesday, January 12, 2010, and last week, more than half the island's population of 11.5 million inhabitants lived in destitution, residing in poorly constructed houses perched on hillsides. Many historians have argued that the seeds of Haiti's current destitution were sown in 1825 when the country agreed to pay France 150 million Francs (then estimated at twice the country's net worth) as compensation for losses allegedly incurred by French planters when Haiti won its independence from slavery. It took Haiti more than a century to pay that debt.

But since the attainment of independence, Haiti's political and economic fortunes have been manipulated by the collaborative effort of resident expatriates, the military and the governments of countries such as Britain, Germany, France, Great Britain and the United States. For example, about thirty years ago, the US imposed a crushing trade embargo on Haiti to reinstate duly elected President Jean-Bertrand Aristide. A few years later, the US imposed an aid freeze against Haiti in an effort to topple Aristide.

We, therefore, argue that if Haiti is to emerge from the current crisis and is to have any hope of escaping from its status as a failed state, the United States, the Caribbean Community (CARICOM) and individuals, such as Pat Robertson, have to change their negative attitudes towards Haiti. The Caribbean should take the first step because, according to calypsonian Chalkdust, we have been treating Haiti "like an outside baby."

This view was supported in an editorial in the Jamaica Gleaner newspaper which suggested that the region prefers "to love Haitians from a distance" and that CARICOM has failed to really engage Haiti.

Nevertheless, we contend that CARICOM's most significant role in the recovery and re-development of Haiti will become evident after international pledges of humanitarian assistance begin rolling in and before the corruption brigade kicks off. Haiti now needs medical supplies, food and water but in the not-too-distant future, the country will need doctors, nurses, teachers, police officers and reconstruction workers – and, obviously, the money to pay for these services. A few economists have estimated that Haiti would require about US$2 billion annually over the next five years for funding an adequate recovery and development programme. CARICOM should focus its attention on accessing and managing that aid on behalf of Haiti.

We agree with Carolyn Cooper, a former professor of literary and cultural studies of the University of the West Indies, who wrote in the Jamaica Gleaner that Haitians are a resilient people: "The Haitian people will rise yet again. And they don't need the help of the devil."