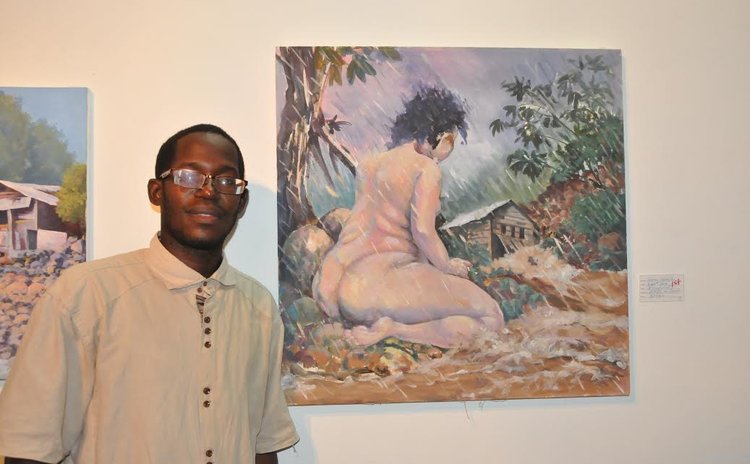 Hamilton produced two paintings the day before the exhibition was held on October 21.

"I decided to do a piece and yesterday morning when I woke up I decided let me go and do a piece…I had some prepared canvas already and I just started to work," he said. "Even before I entered the competition when I finished the painting I felt very good. I was happy that I did it. I felt I good about it and that is an indication that it is well done…I did not come to a surprise that I might be able to win."

Hamilton won $1000 with the piece entitled 'Discomforted". The second place winner was Petros Meaza; he won $750 and third place was Roger Burnette; he won $500.

Chief Cultural Officer Jacinta David said these works of art are crucial to building a collective memory of an important event which took place in Dominica.

She noted that these paintings serve as enduring windows into the lives of ordinary people who were affected by Tropical Storm Erika.

"These works of art provide one with to what really happened on August 27, 2015. I must say art is a long standing and creative way to capture history that which may otherwise be forgotten," said David.

David said that visual arts have a strong influence on the development of society.

She said that creative thinking for social change can come from politicians, economists or business leaders just as it can come from musicians, choreographers and visual artists.

She added that not only do visual art provide pleasure and creative inspiration but it also help foster dialogue to bring important issues to the public eye.

"Art is powerful in its simplicity; it can convey ideas across the classes and culture due to its lack of reliance on written language, this makes it one of the most powerful tools for communication," she said.