There are 900 applications for 60 apartments at Elmshall. Government is not saying how it will decide who gets what 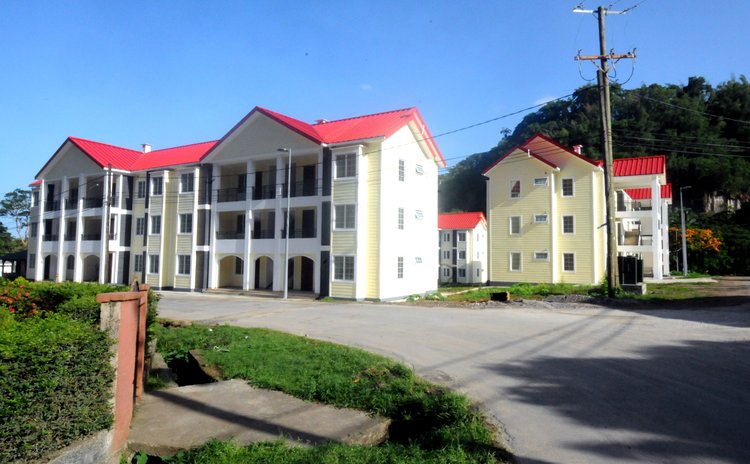 View of Government appartments at Elmshall

The government received 15 times as many applications for the new homes in Bath Estate and Elmshall as there are available apartments, The Sun can reveal.

The two and three-bedroom apartments are "physically ready" but a determination has yet been made as to who will occupy them, a source familiar with the process has said.

According to the source, the housing division "received over 900 applications for the 60 apartments" and passed them over to the permanent secretary, who in turn has forwarded them to the minister of housing, Reginald Austrie. The Cabinet is to decide who among the over 900 applicants will be assigned homes.

"The housing division are the front line in having the applications forms prepared, advertise and receive the application forms. The list has been passed to the cabinet of ministers (to decide).

"Eventually [the people at the housing division] will receive a list of 60 names or so and will prepare the allocation letters," said the source, who spoke to The Sun on condition of anonymity because the applications were believed to be still under consideration. Once the division is told who are to get accommodations, it will put names to apartments and advise the people accordingly, the source added.

The source was unable to say what criteria were being used to allocate the homes, and several attempts to reach Austrie were unsuccessful.

However, when Prime Minister Roosevelt Skerrit announced to plans for the project over two years ago, "he cited the main reason as assistance to single parent families struggling with high rent," the Government Information Service (GIS) said in a release in February of this year.

"When I speak to people about the amount of money they have to spend on rent in some small apartment, there is no way these people will survive. The Government recognises that challenge and we've gone ahead and started to build apartment to provide for single mothers who have to pay $1,000 or $950 for a one bedroom or two bedroom home in the capital city," the GIS quoted Skerrit as saying at the time.

The lack of clear and transparent guidelines for allocating the apartments, along with the fact that it is the Cabinet that decides, has led some observers to worry that politics could be the determining factor.

"I don't believe any UWP (opposition United Workers Party) supporters will get apartments. If I was Skerrit I would not give to any UWP supporters," one person told The Sun.

The Member of Parliament for the area, Joshua Francis, is among those who noticed that "the government has not made its criteria public".

Francis told The Sun that "we have been basically waiting and observing" and that he intended to raise the matter in his contribution to the budget debate.

He told The Sun that in recent times there had been a rise in "political tribalism whereby a lot of government decisions are guided by politics", and that the allocation of homes could not be expected to be immune from this behaviour.

"There are lots of rumours that persons who support the Dominica Labour Party get preference. "What I know as a fact is that in Dominica we are very, very political," Francis said. The Roseau South MP made reference to apartments that were constructed in Silver Lake, saying that while he was pleased that some of his needy constituents had received assistance, the spectre of politics had raised its ugly head there.

". . . in Silver Lake, six persons were given apartments and another is being constructed and another six persons will be given apartments. We welcome that, and that is good. However there have been allegation that the persons who are in receipt of these apartments are government supporters. But, again, how can you prove that? I don't like to politicize these things, especially when it comes to basic necessities," he said.

It is not immediately clear when the Cabinet will hand down its decision on the Bath Estate and Elmshall apartments, funded through a soft loan from China and built by the Chinese firm, the Shanghai Construction Company. It is also not clear how much each apartment will cost and what the payment terms will be.

"I know that a valuation was done . . . The valuation unit did propose an average of $300,000 per unit. But from experience, I doubt it will be that," one source told The Sun.