JUMP BALL No. 75 : By Arlington James 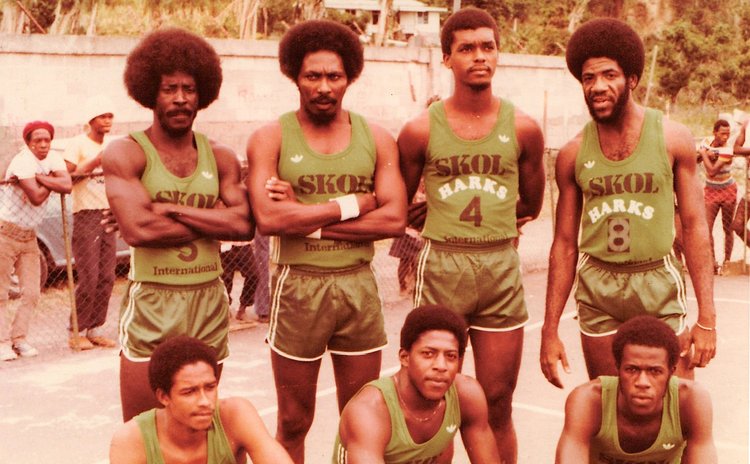 You hear the word 'hark', an Old English word that means listen, and immediately your mind flashes to that popular Christmas Carol, "Hark, the Herald Angels Sing". But in Dominica's basketball arena where we sometimes sing the praises of our teams and players, the name HARKS conjures something completely different.

Harks, a Roseau-based Division I or Senior Division team that ran the Windsor Park basketball court for a period straddling three decades (the '70s, '80s and '90s) have quite an interesting story to tell. So, hark! Let's 'hear' about the Harks basketball team of yesteryear.

Their Debut: Harks debuted in the national league of the Dominica Amateur Basketball Association (DABA) in April 1976 and remained alive and competing continuously for a full 17 seasons thereafter. That year (1976) there were only seven (7) teams in First Division and their opponents then were Ambassadors, Cardinals, Flames, Pros, Roots and Strikers.

1976 for Harks was the year of "testing the waters", and sure they found out that it was not easy out there. From available scores, they ended their maiden season with 2 wins and 5 losses, including a 23-Point defeat from Cardinals (30-53).

Over their lifetime Harks were involved in several close games, winning or losing by between 1 and 5 points. They also enjoyed handing out blowouts to their opponents occasionally, or suffered similar treatment in some games.

On the other scale pan Harks suffered at least 14 severe defeats, but collectively from only four teams. Cardinals alone handed them at least 6 "big ones", Eagles 4, Flames 3 and Pros 1. Their three worst defeats came from Cardinals when they lost 72-108 and 42-73 respectively, and from Flames to whom they had lost by 31 Pts. N.B. Information not available for the 1979, 1980 or 1981 seasons.

Harks clocked triple-digit scores on at least three occasions, two of which were mentioned above. Their biggest "hundred" score was against Owls in a 111-61 thrashing. This was followed by 106 against Rockers in another stinger (106-59), and 100 to Pros' 122 in a losing effort.

So Close, But Yet So Far: On 1st March 1985, in his Sports Commentary which was dubbed "A Bright Burst of Basketball Power'" renowned sports personality Reginald St. Havis Shillingford wrote the following about Harks, "When HARKS make up their minds to play good ball no one, I repeat no one, can stop them. With inventive and tireless players like Mickey CASIMIR, Augustus "Stepfoot" HARRIS, Emanuel LOBLACK and others they should pose an immoveable tower of strength. Yes, indeed, but do they always listen to their mentor Edgar ROBINSON? They make themselves into an enigma. Up at one time and suddenly they prick their own bubble and disappoint themselves and their fans."

"Havis" made those remarks during Harks' 10th season on the court, and over their seventeen years in competitive basketball, on no less than four occasions they pricked their own bubble and disappointed themselves and their fans, to borrow from Havis' summation.

Many who followed the 1989 basketball season still recall that Knock-out Finals match between Harks and the legendary Cardinals with scores tied at 82-82 in the final seconds of Regulation Time. Scoring a simple lay-up against the "kings of Dominica's basketball" would have won the game for Harks and presented them with their first Championship trophy.

But this was not to be, as the other Harks players, their team-mates on the bench, and the hundreds of fans on the packed Windsor Park stands, watched in utter disbelief as that unguarded, but very skillful, talented, athletic player missed what should have been a very simple lay-up. And so, Harks missed yet another championship. (Cardinals won by 8 Pts in OT; the player got 11 Pts)