Has Dominica recovered after Hurricane Maria? No, it will take many decades and billions of dollars 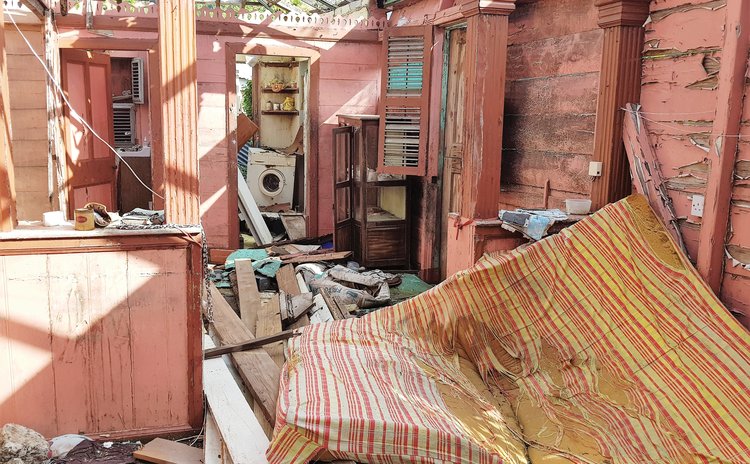 Many house were repaired in 2018 but, unfortunately, many, like this one in Roseau, were not repaired

"Did the trees protest as they were mercilessly shorn of their limbs and leaves? Did the aged and sturdy trunks scream as your minion wind snapped or uprooted them?

Did you enjoy the wail of the mountains, as you caused huge sections to be gouged out, disembowelling them?...

…closed doors rumbled, rattled, shuddered, under the onslaught of your winds. You sadistically sucked in your breath, then expelled it with crushing force, similar to the ocean dragging water from the shore, then crashing on land, destroying everything in its path. Eardrums felt as though they would burst; the house seemed ready to be lifted in one minute, ready to be blown apart in the next. This one-sided battle seemed endless…

From "Dear Maria" by Dorothy Leevy

Last week Saturday, 18 September, Dominicans counted their blessings, gave thanks, and remembered the pounding that the island received in 2017 at the hands of category-five Hurricane Maria.

Many of the physical scars have been healed, mainly through the resilience of nature and so some people have erroneously concluded that their island home has recovered from the devastation of Maria.

Yes, the vividly green mountains and valleys have returned; the mountains of garbage and galvanize sheets and hills of mud have been cleared; the graveyards of massive tree trunks on banks of rivers and on seashores have disappeared; the houses, hundreds of them, have been repaired and other structures, such as bridges and roads and schools, have been repaired, to a certain extent.

Members of the business community have resorted to the Court for redress for the wanton looting, named the second hurricane, that occurred for days after Maria. But four years later the Court has not moved to decide whether businesses should be compensated for looting that occurred right before the eyes of officers of the law.

If that is your version of recovery, welcome to another world.

But no, this island is still suffering immensely from the massive psychological damage that the storm wrought on the inhabitants. It will take decades for the island to recover and anyone who says otherwise is either blind to reality or is attempting to fool you.

For example, the island's economy is still in tartars; sectors such as agriculture, tourism, and manufacturing have not "recovered" and will not completely recover to pre-Maria levels for many, many years, probably decades.

The point is, if you accept that the level of damage that Maria inflicted on Dominica, one of the poorest islands in the Eastern Caribbean, was mindboggling, how could you explain its "recovery" within four years? Where did the money come from and how much did it cost?

We cringed, shook our heads in amazement when Senior Minister Reginald Austrie said at the "Handing Over Ceremony for Residential Units in Geneva Grand Bay" on 23 rd. September 2020 that: "I wish to say that Dominica is better off today than it was the day BEFORE Maria."

A look at the statistics of Maria's destruction from an executive summary of a document prepared by the World Trade Organisation (WTO) tells the tale of destruction and the mountain that we will have to climb to recovery.

"Hurricane Maria provoked damage estimated at 226% of GDP. Some 1.8 million workdays were lost across tourism, agriculture, and commerce. Commerce and the micro-business sector suffered damage to the tune of US$ 70.4 million. Damage and losses in the agriculture sector were substantial. Agricultural production including crops, infrastructure, equipment, and croplands, was affected. Furthermore, high winds and intense rainfall damaged the forest system."

Note that 20,000 Dominicans left Dominica after Hurricane David in 1979 and, we estimate, a similar number may have migrated in 2017. If the government knows how many of its citizens left after Maria 2017, it has not released that information. But how does a country "recover" when thousands of its youngest, most able-bodied members of its workforce disappear after a disaster like Maria?

It's obvious that tourism has not recovered –just take a look at just three hotels-the Garraway, the Evergreen, and Anchorage Hotels- in Roseau and its environs.

There is a similar story in the agriculture sector – remember that tree crops take five to ten years from planting to optimum production. In Grenada, for example, the nutmeg industry was destroyed by a hurricane in 2002; it took ten years for nutmegs to return to the Spice Isle.

Additionally, people who glibly say that Dominica has "recovered" from the destruction of Hurricane Maria conveniently forget the impact that the departure of the 2,500-student strong Ross University School of Medicine of Picard in Portsmouth has had on the Dominican economy.

Recall that on 3 August 2018, about 11 months after the passage of Hurricane Maria, the medical school announced that it planned to relocate to a new campus in Barbados. The university campus and the sprawling hotels, guesthouses, apartment buildings, supermarkets, and restaurants in Picard remain empty.

Can an island recover that easily after losing 15-20 % of its Gross Domestic Product?

Hence, as Dominicans remembered the horrors of Hurricane Maria they must also be wary of faulty arguments that Dominica has somehow recovered completely from Maria. Nothing is further from the truth.

The truth is recovery, real recovery, will take consistent and persistent action for many decades.

"Economic output in Dominica is projected by the IMF to drop by 14 percent in 2018 and will take around 5 years to recover to pre-hurricane levels," says the WTO document that we quoted earlier.

"Disasters have large and enduring economic effects". We continue to argue that Dominica has not completely recovered from the ravages of category five Hurricane David four decades ago, especially from the mass exodus immediately after the storm. It will take as long for the country to recover from Maria.