He lived a full life 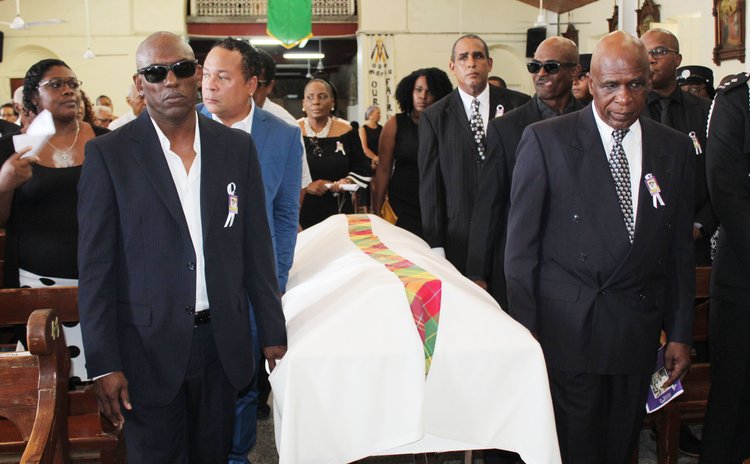 Pallbearers at the funeral of Cecil Clarke Sr

The 97 year long journey of life of Cecil lvor Paul Clarke began on March 2nd 1922 when he was born from the union of Meredith and Nathaniel Clarke accompanied by three brothers and one sister.

His dad, Nathaniel Clarke, as Superintendent of the Prison, lived with his family within the prison compound and so Cecil grew up in Roseau within the confines of the regimented demeanor that prevailed therein. This helped shape the character that he carried throughout his life as a disciplined, punctual, upright, respectable yet very sociable individual; one who could fit into any situation he was placed.

As a young man, "C.I" as he was called by many, meddled in the vagaries of youth and developed into a stunning young man. He was an avid sportsman, played cricket and football at school and as a member of the Roaring Forties club. Often in his later years he would reminisce about his days as a cricket/ football player with guys like Waddy Astaphan and Eric Carrington.

C. l. Clarke heeded to his call of duty during the uncertainties of the World War II. He was a Sergeant in the Volunteer Defense Reserve Force during WW2, based at Morne Bruce. This Reserve Force was called into action in case of emergency and when ships were sighted coming into port during the war. He later down in life became a member of the Dominica Rifle Club.

In the mid of his youth, post-World War II, he migrated to Curacao seeking greener pastures and opportunities. It was there that he had to show his true metal, as a young man on his own, having to live and compete with other islanders. He worked at an oil refinery as a lab technician with persons like John Compton and Justice Piper there for many years, and was never hesitant to assist less fortunate migrants to settle down and pursue their dream.

He was distinguished for his sporting prowess and led the National Football team in Curacao. He was well endowed socially with qualities that made him an outstanding dancer of merengue and salsa; always ready to demonstrate moves which up to a decade before his sweet sojourn, he would boast about. He was a lover of music and in his quiet moments would be strumming the strings of his well-tuned guitar which still sits in his basement. Upon his return to Dominica from Curacao he moved on to St. Lucia as a Nestles salesman, working with the firm of Peter and Company. In the 60's he returned home and took up employment at the Dominica Dispensary followed by a stint at O.D Brisbane & Sons in the mid 70's and then at Green's Wholesale.

Despite all of the above, C.I. or "Clarkie" was best known as the man with the camera. He laid a foundation in photography, stemming from the days of darkrooms and the development of black and white photos at Eve' s Photo, which his son, Cecil Junior, today builds on.

Cecil .I. P. Clarke was a loving, caring and generous man; he placed family at the centre of all his deliberations and, as often as he could, spoke of his siblings, his nieces and nephews and the extended Clarke family. He was married to Eva Green his 50-year long partner and this union bore a son Cecil (Junior) and daughter Anne-Marie; "the reason why he lived". He fathered five other children prior to his union and remained close to all.

This charismatic man with an infectious grin had a trademark that resonated among all family members and friends who came close to him; this long, tight hug.

As we celebrate the life of this maverick of a man, one whom we anticipated would join the ranks of living centenarians, we individually are left with memories that represented his impact while on earth. Let us remember that "memories don't live like people do".

C I. P. Clarke lived a life of full until the "sower", whose name is death in everlasting peace, collected him as part of his harvest. Everlasting Peace...