"He was a doctor with admirable qualities" 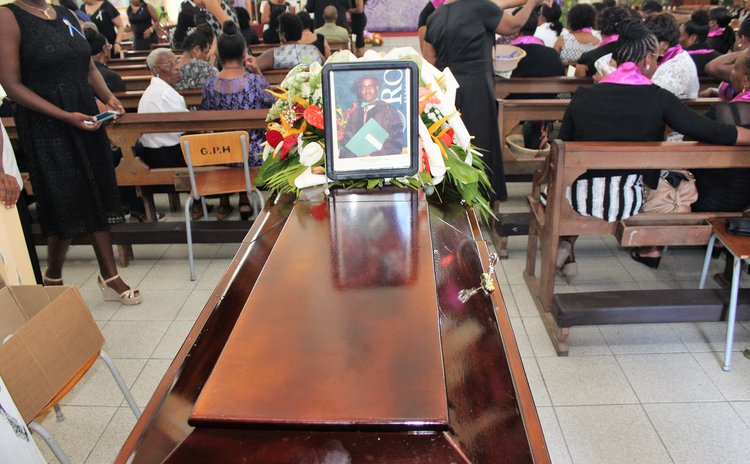 Quote "It is the duty of men to love even those who injure them": Author unknown The late Philip M. St. Jean was born in La Plaine to Ms. Philomen Joseph and Mr. Maurice St. Jean. He was a medical practitioner, teacher, university tutor, junior calypso monarch, sportsman, sports administrator, cultural enthusiast, and part- time farmer.

Dr. St. Jean attended the La Plaine Primary School, (now Jones Beaupierre) and later moved to Roseau to attend the St. Mary's Academy (SMA) where he later taught biology and integrated science. There, his passion for learning was further ignited. At the SMA he also developed other lifelong interests which helped mold him into a well-rounded individual. While at that Catholic institution, his love for sports grew. He played table tennis, badminton and shuffle board but basketball was his preferred sport where he displayed a unique lay-up style (a run up to the basket to score). According to his close friend, Paul Moses, "he perfected that skill to the frustration of his opponents".

At SMA, his game flourished and earned him a place in the school's basketball team. He would later move to the Sixth Form College to pursue GCE advance level courses and also played basketball for the college together with high school friends Paul Moses and Dr. Irving McIntyre. It was also at high school that his exceptional talent as a budding calypsonian was nurtured. Zico, as he was known on stage, won the junior monarch title twice. Notably, his 1980 rendition, "Doh Let the Pigeon Fly" was a socio-political commentary and satire about former Prime Minister, Patrick John, which proved correct.

The desire for continuous learning was then set ablaze as he continued by pursuing teacher training courses at Florida A & M University. He later completed studies leading to the Bachelor of Science degree at the University of the Virgin Islands, graduating magna cum laude in May 1994. This programme provided the impetus for advancing his academic ambitions. His dream to take the Hippocratic Oath was further strengthened while he served as the administrative assistant at the UWI School of Continuing Studies (now the Open Campus) for it was at that institution of learning he planned and organized undergraduate and graduate distance education programmes. At UWI, he advised and counseled students on programme choices and courses. His dedication, commitment and academic pursuits earned him several awards including the Bishop Morris Award and Student of the Year at the SMA, the Presidents Club and the Barnett Frank Award at UVI.

The year 1998 would mark a significant turning point in his life and the opportunity to be of service to others. It was in that year that he received a Government of Dominica scholarship to pursue the degree of Doctor of Medicine at Ross University School of Medicine. He was indeed a very proud graduate of Ross. He carried this badge with honour and distinction.

Along that journey he completed elective courses at Wyckoff Heights Medical Centre in Brooklyn. He also completed part of his clerkship at the Mary Immaculate Hospital in Queens, NY and also attended Christian North East Hospital in St. Louis, Missouri.

He graduated from Ross University School of Medicine in November 2002, following which he returned to the Caribbean to continue serving his people. He completed his internship at the Dr. Eric Williams Medical Complex in Trinidad and returned to Dominica in 2006 where he was posted to the Princess Margaret Hospital. In 2007 he was transferred to serve as District Medical Officer at the Roseau Health Centre. It is in that capacity that his legacy will live on. For Dr. Philip St. Jean service to his patients transcended all else. This enduring characteristic of service provided the fuel and energy for his work in medicine.

He was well known throughout the Health Districts and served in six of them. He was ever willing to relocate to any health district where his services were required even at great personal sacrifice. Hurricane Maria was no exception. In fact, the records at the Roseau Health Centre show that he saw more patients than any other medical officer stationed at the Centre. Although he served as Team Leader on several occasions and at the time of his passing he had been recommended to act as Director of Primary Health Care Services, taking care of his patients had a special place in his heart. He had a special love for the elderly.

Notwithstanding his many academic achievements and considerable talent, he remained grounded to his roots and had a special passion for the creole language, which he spoke fluently in casual conversation or in formal settings.

Dr. St. Jean, Zico, Murray or Phil, as he was affectionately known, had a calm, pleasant and respectful disposition. He had this unique ability to reassure everyone he met that things will be all right. He had a rich repertoire of jokes that he often prefaced with creole idiomatic expressions. He exploited the funny side of life's mundane experiences; he was quite a comedian in that respect.

To Halander he was her best friend and comedian in chief. He was never able to stay angry for long and always found a way "to break the ice." Amidst his many duties, he made time for Sunday Mass at the St. Alphonsus Catholic Church.

He will best be remembered for the love and dedication to his patients. His was a life of service well lived and in return his patients showered him with blessings, expressions of gratitude and prayers.

RIP Doc, your work here has ended. May our Lord in his infinite goodness grant you a place of eternal rest.

It is a sad day for us in Primary Health Care Services and by extension The Ministry of Health and Environment, as we mourn our friend and colleague Dr. Philip St. Jean, Medical Officer of the Roseau Health District.

Dr. St. Jean became a Medical Officer in Dominica on September 13, 2005 and was assigned to Primary Health Care Services in October 2006. His course in Primary Health Care Services can be described as unique, as he has worked throughout most of the Health Districts, with his main stint at Roseau. His commitment to the tasks and his professionalism has never gone unnoticed, but more importantly, his efforts at caring for patients became his solemn priority.

An exemplary worker, colleague, mentor, father figure and friend to all he came in contact with, sometimes by providing a gentle touch whilst maintaining a jovial smile. His warm personality served as an attraction to his patients, whom he so dearly loved and cared for. His charisma and his fluency in communicating with patients in either English or Creole was a most distinctive feature for patients who sought him out and felt better by his mere interaction, even before the prescription was written.

Unassuming, kind hearted, very approachable, humorous are just a few words to describe Dr. St. Jean who went above and beyond his call of duty to ensure that every patient he assessed left feeling satisfied, that he did all he could to assist them.

As Director, on behalf of Primary Health Care Services and by extension the entire staff of the Roseau Health District and Other Health Districts, I wish to extend condolences to the family, friends and patients of the late Dr. Philip St. Jean. We hope that all may find comfort in the words found at Revelations 21:4 in this time of bereavement.

A tribute to our Colleague and friend, Dr. Philip St. Jean

By Staff of the Roseau Health District

Dr. St. Jean -To some, he had many roles ... friend, colleague, teacher, father, son and more, but to all he was someone very special.

Dr. St. Jean joined the health team in 2007 and has since, despite being transferred to different districts, ben a fundamental part of the Roseau Health Team. He was an exemplary team player. He was a doctor with admirable qualities. He loved his patients and worked selflessly towards their well-being. His special leadership abilities and charismatic personality were readily apparent. Without a doubt, he was truly one of a kind - a cherished colleague, a friend

For my beloved brother

We have grown closer with the passing of time, though far apart yet ever closer. The distance did not matter and the feelings of closeness remained with me because I knew you were always there, a brother to me and uncle to my children. Whenever I visited Dominica, you always made time for me amid your busy schedule. I am blessed to have had you in my life and you will continue to be in my life, in my heart and through cherished memories. Your kindness, love, selflessness, your humor and your ability to inspire will always be with me. You are loved, appreciated and are very special. You have touched many lives and made this world a better place just by being a one-of- a -kind person. As you take your final journey, I ask God our father to bless you, guide your way to his kingdom in heaven and to grant you eternal life. Rest in perfect peace and may the love of Christ be with you till we meet again.