"He was a perfectionist" 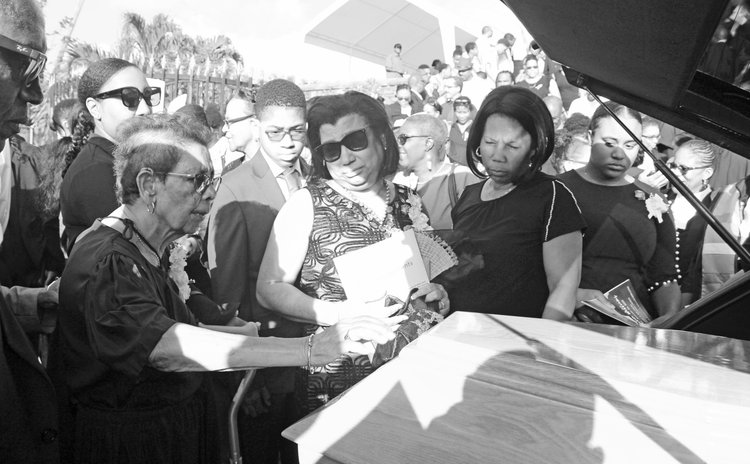 Family of the late Kervin Williams at his funeral service

Kevin Justin Williams was the second of two children of Percy Williams from Colihaut, Dominica and Isabella Williams of Grenada. His parents were part of the "Windrush" generation who migrated to England after World War II, in the 1950s and 60s. It was here in the UK, that Kevin and his sister, Deborah, were born. Kevo, as he was affectionately known by family and friends alike, was born on the 28th July 1961, two years after his sister, Deborah.

Kevin's father, who was a mechanical engineer, moved the family from the UK to Guyana to work for the Guyana Rice Industry in 1971. Kevin was 10 years old. Kevo inherited an aptitude and interest in engineering and mechanical matters from his father which remained with him the whole of his life and which would stand himself and his family in good stead over the years. Not surprisingly, his first job was as a mechanic, specializing in structural repairs and body work.

In Guyana, the family soon formed part of a talented Dominican community living there, which included private and public professionals such Dr. Henry Fagan, Hyacinth Elwin, Justice Albert Matthew and Justice F.O.C Harris among others, all of whom would go on to play notable roles in the Dominican homeland in the years that followed. From Guyana, Kevin and his parents moved to Trinidad, where Kevo attended the Hugh Wooding School of Law after graduating with an LLB degree at the University of the West Indies in Barbados in 1989.

After a number of years in Trinidad, Kevin and his parents moved to Dominica, where Kevo was employed as a lawyer in the highly respected firm of Armour, Armour & Harris. It was here that he was able to "cut his teeth" as they say in the profession as a young lawyer.

His return to Dominica at that time revealed an aspect of Kevo's character which marked his entire life -devotion to family which was to prove such a bond with his wife and two children, Yasmin and Yannick, whose welfare was his main preoccupation in life.

For Kevo, it was one of those twists of fate that sets the trajectory of one's life for good. For there, he met his future wife, Singoalla, his beloved "Bloomie", the soulmate with whom he would share the rest of his life and his final moments in this world.

Kevo did not miss his chance. Armour, Armour and Harris were Singoalla father's lawyers.

She went there one day to do business for her father and was sent to Kevo, the young junior of the Firm. For reasons which would become clear before too long, Kevo got very interested in this matter and made every excuse to prompt his future wife to get on with the task she was assigned.

Kevo and Singo were married in 1993, whilst completing his Master's Degree in Banking, Insurance, Companies and Civil Procedure at the University College, University of London, UK. Three years later in 1996, he set up his own law Partnership of Prevost and Williams.

Kevin was what one would call a purist lawyer. He had a truly professional approach to the profession. He had a firm understanding of the law and was always willing, even anxious, to share his hard-won knowledge with his fellow lawyers, especially the younger ones. Yet for all that he never lost his humanity, his calmness and his gentleness, which some who did not know him, could mistake for timidity. But not at all, as one little example shows.

On one occasion, Singoalla came to court to find the wife of Kevo's client distraught and in tears outside the courtroom. Wanting to comfort the lady, she gently asked her what was the matter. 'Oh, the lawyer (Kevo) was too mild, he wasn't aggressive enough", she moaned. "Don't worry Singoalla consoled her?" He knows what he is doing, he just has a different style". But one should never mistake mildness for weakness. Kevo secured an acquittal for his client on a submission of no case to answer.

Kevo's thoroughness and professionalism drew the attention of the English Courts who accepted his expert legal opinions over those of many more established, big-named lawyers in the region. He was a creative legal luminary, and belonged to that select band of lawyers who, in the course of their practice manage to change the law to provide better protection for vulnerable groups. Thus, it was that he single-handedly succeeded in providing real protection to vulnerable elderly people who could be imposed upon to stand surety for bank loans for unscrupulous children. After the decision in the case of AID Bank v Edwards, people now needed legal advice when acting as guarantors of loans.

And then came one of those turns of life that sets our outer limits of living. Three years after he started in private practice, Kevo was diagnosed with congestive heart failure, a degenerative and incurable illness.

It was in combating this crisis that the true light of Kevo's character shone through. The years ahead would pose huge challenges, but with his beloved "Bloomie" by his side and later with the blessings of his children around, he would defy the doctor's predictions and live much longer than anyone expected.

Kevo's illness meant having to seek immediate medical attention overseas. The first stop was Martinique, where the doctor said that when he saw patients like Kevo, he would simply tell them to go back to their homes, most certainly to die. That was not Singoalla and Kevo's view of things. From there, they went to London only to be told that he had only about a year to live unless he obtained a new heart. He was able to do this in the United States, where he literally died when his heart stopped during the Doctor's attempt to insert a defibrillator, only for Kevo to spring to life again saying that if they covered him up in the grave, his Bloomie would not be able to find him. Fortunately, Kevo was able to find a new heart and a new lease of quality life in which he could continue to make a contribution to his family and country for another 20 years.

In his interactions he would always introduce a quota of dignified wit which would elicit smiles and leave one thinking- "I never thought of it that way, how did Kevin think of that?" We all will surely miss those witty conversations.

The sad end came in London, in the arms of his beloved soulmate with whom they had overcome so many challenges together. The heart that had been predicted to cease functioning a decade earlier finally gave up as Kevo drifted away without pain at 2:11pm in the afternoon ironically after a week which was pain-free and where he experienced an unusual burst of energy.

The way that he lived his life has and will continue to provide an inspiration especially to his children Yasmin and Yannick of an honourable, full and purposeful life, in spite of the limitations imposed by ill health. He died at a relatively young age at 58, but he was able to pack it with activities and achievements that one would associate with a much longer life. He was a perfectionist, whether as plumber, builder, mechanic, furniture maker, lawyer, father, devoted husband and loving son.

Throughout it all he maintained a calm and calming demeanour, a kindly and generous disposition, and a stoic endurance of pain and adversity with a level of dignity and humility which made him a delight to live with. He will long be remembered.