"He was the most misunderstood, misjudged and poorly characterized human being" 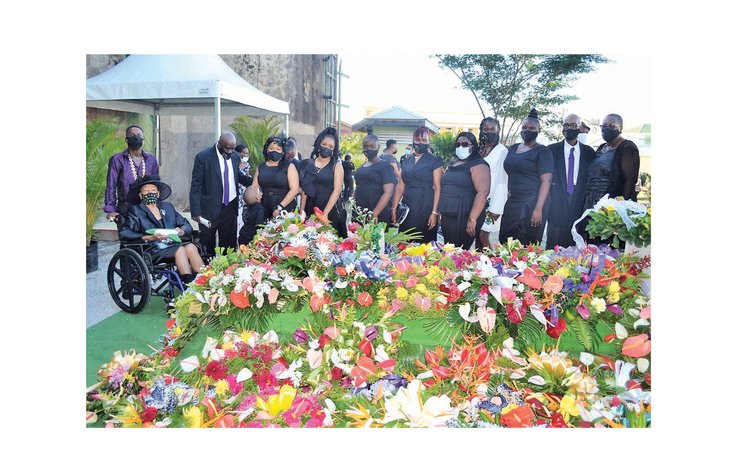 Members of PJ's family at his graveside

For many, the man Patrick Roland John has been seen only through the eyes of those who sought to control the narrative of who he was. Over the years "historians" politicians and many who felt that they had the handle on the true knowledge of this man called Patrick Roland John have sought to provide a version of the truth which by all accounts can only be validated from the outside.

Indeed, for many, he was portrayed as the overbearing "dictator" the menace to society, that mercenary who sought to overthrow" a legitimately elected government by some elusive childish dream of a power grab.

While for others he was seen as that crippling force who sought to work against the masses in their quest for societal progress and popular amelioration.

Yet, for those who knew the man "PJ" as he was both popularly and affectionately called, the demystification of the paradigms which have been circulating over the inevitable ignorant-i.e. those born after 1980, is imperative if we are to give due credit to the endearing stature of this man, who we must come to know as an antithesis of the "lie" while exemplifying, humility, deep faith, forgiveness, charity and genuine concern for the poor and disadvantaged.

Patrick was born into a very humble family, the last of 13 children born to a huckster, his mother and port worker, his father, on New Street, now Kennedy Avenue on the 8th of January 1937.

Rising to the top of the leadership of this country as the first prime minister was no small feat as he had to struggle and confront many challenges and attempts at suppression and oppression from the many sectors of the bourgeois and gwo bourg sectors of our society.

Still, he endeared from education to trade unionism to politics while still not leaving behind his deep love for sports, particularly football, culture, as in steelpan, carnival, and religion.

Beneath all this grandeur of controversy, political power, and sporting prominence lay a man who, once one had the gracious and fruitful opportunity to know, was indeed one of the most charming, gregarious, and most pleasant personalities.

Patrick never boasted of perfection as a trait; what he relied on, however, was his knowledge that he was accountable to his Maker.

In addition to which PJ can be hailed as a quiet sufferer and determined pilgrim who would always credit whatever misfortune he encountered as part of the master plan for his life and a guiding hand and stepping stone as he traversed his "via-cruci" on this earth.

PJ was also a treasury of knowledge on history, culture, and most adept in religion and the languages of Spanish and Latin. The latter of which he could be referred to as a Latin dictionary and thesaurus of phrases.

For those who thought of him as cold and inconsiderate, nothing could be further from the truth as one could never have encountered a more loving, charitable, and considerate person than Patrick Roland John as he would most times empty the very little from his pockets to help the less fortunate or anyone who came to him for assistance even in his most deprived times.

He loved to tell a good joke and find humour in even some of the most serious situations and most strikingly, in the face of strong opposition often laughing off any attack on his person as mere jokers.

I can recall several instances where Patrick would annoy his family and closest friends when in the face of animosity be most congenial with his opponents and attackers. In fact, one can most definitely say that he harboured no grudges or hate even against his worst enemies, he was quick to forgive with a very large heart.

If patience was not a virtue, Patrick's disposition to not fret about anything would certainly usher a new understanding of the value of life and so one can say that he epitomized the essence of- let nothing disturb you, let nothing annoy you, in time will see, as he was fond of saying ..." time will tell".

In his better days, he loved a good whiskey and often treasured the purchases of his favorite Black Label whenever the moment provided an opportunity.

Having known Patrick for most of my life my testimony can only be that it is very sad that throughout the sojourn of Patrick Roland John, he was the most misunderstood, misjudged and poorly characterized human beings that may have walked this local soil of Dominica.

How sad it is to know that the writers, storytellers, prominent spokespersons, and would-be historians made it their vengeful mission to cast Patrick Roland John in a bad light. Nonetheless, PJ, as those of us who knew him personally and perhaps better than all the showcase observers, that we who knew him best can testify otherwise, that indeed he was a great and good man.

Dominica and the poor people of the Commonwealth of Dominica did, in fact, miss an opportunity of a lifetime when we were denied the opportunity of having him usher us into the first years of nationhood. Dominica would certainly be better off.

Political Career: Mayor of Roseau-(youngest, 28 yrs.) - 1965 to 1970; General Secretary of Dominica Labour Party (DLP) 1965-1970; Parliamentary Representative Roseau constituency 1970-1975; served as minister in the ministries of education and health, communication and works, home affairs, finance and agriculture between 1970 and 1975; elected unopposed as leader of the DLP in 1974 following the resignation of Mr E.O Leblanc; sworn in as Premier of Dominica, May 1974; served as the parliamentary representative for the Goodwill Constituency, 1975-1980; Premier of Dominica, 1974-1978; first prime minister of Dominica from 1978-1979; member of opposition 1979-1980; elected parliamentary representative St. Joseph constituency, 1985.

Sports: Played for Dominica and Windward Islands youth teams in both cricket and Football; national football player for 17 years; Windwards Islands footballer for 10 of these 17 years as well as president of Dominica Football Association (DFA).