Henderson is new OAS and US Ambassador 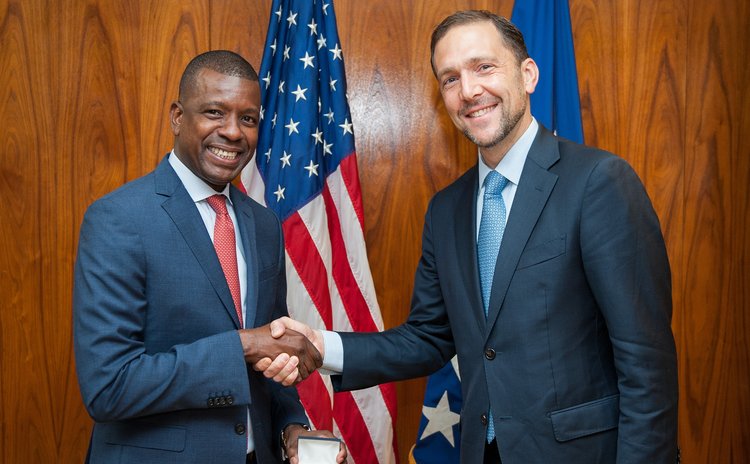 WASHINGTON D.C. The Government of Dominica has appointed a new Ambassador to the United States of America and the Organisation of American States (OAS).

Dr. Vince Henderson has officially commenced his tour of duty as Head of Mission at the Embassy of Dominica in Washington D. C. following the presentation of his credentials to His Excellency, Ambassador Peter A. Selfridge, Chief of Protocol of the United States Department of State on Friday October 1, 2016 and to His Excellency Luis Almagro, Secretary General of the Organisation of American States on Monday, October 3, 2016.

At Monday's forum, Ambassador Dr. Henderson outlined key areas of mutual cooperation which he will continue to pursue particularly in the areas of geothermal energy, climate change and initiatives in Oceans management and preservation of our water systems. Dr. Henderson also provided an overview of Dominica's progress in the field of geothermal energy and reiterated the commitment of the Government of Dominica in the areas of energy and climate change. He cited recent climatic patterns as clear indicators that efforts to mitigate the effects of climate change must be well coordinated and must be done through partnerships. He used the opportunity to extend an invitation to the United States to collaborate with Dominica and the wider Caribbean to further these important initiatives.

Dr. Henderson is expected to present his Credentials as Ambassador of Dominica to the United States of America, to the President of the United States, Barack Obama, during a White House Ceremony In November, 2016.

Dr. Henderson has a distinguished career having served as a Minister of Government and diplomat accredited to the United Nations. He served as Minister for Agriculture and the Environment from 2001 to 2004, Minister for Education, Human Resource Development, Sports and Youth Affairs from 2005 to 2008 and Minister for Foreign Affairs, Immigration and Labour from 2008 to 2010.

Dr. Henderson holds a BS in Computer Science, MS in Law and obtained a PhD in Law and Policy; Renewable Energy Policies in 2014.

He replaces His Excellency Hubert Charles who held the position of Ambassador of Dominica to the United States and the OAS from 2010.(GIS)