Henry Hilaire: "I'm married to it" 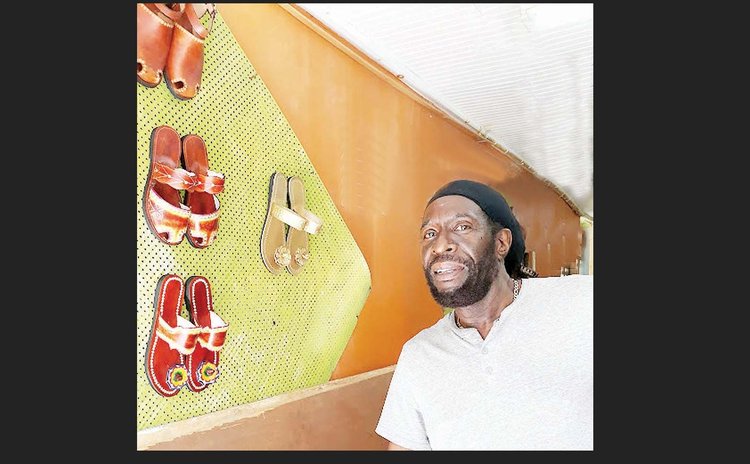 Henry Hilaire and some of his shoes on dispaly

The feet that walk the streets of Dominica and cities of the world are all protected, and somewhat styled, by different types of footwear. The footwear can speak volumes about the designer and country of origin. In Dominica, our leather sandals have been making bold, eye-catching statements around the globe.

It is not unusual to see the feet of locals clad in leather sandals, as it is very commonplace. Henry Hilaire, owner and founder of Bionic Leather Craft, is a Dominican artisan who manufactures this attention-grabbing footwear, among other handsomely crafted leather goods.

He has been involved in this business for over three decades and told The Sun he ventured on this path from an early age.

"It was from my teenage years, after school, people were urging me to do something so that is where I started," Hilaire said.

To date, Bionic LeatherCraft is a company, producing leather goods such as sandals, bags, belts, etc. Hilaire confessed that being able to bring out his creative side is what kept him addicted to the art form for so many years.

"It's the whole creating part of it. I like to create things with my hands and that is what gave me the feel to do that," said Hilaire.

Despite the love for an art form, there are always difficulties along the way. This is no different with Hilaire who recalls one of the most challenging times was shortly after he got into the business. "My main challenge, at the initial stages was accessing material and machinery. But I have worked over that, I have acquired some machines and supplies," he said.

Material for the leathercraft trade is not sourced locally and Hilaire turned to a regional supplier to ensure his vision of creative leathercraft production became a reality.

"That was just after Hurricane David, material was very difficult to get. But we had an association, I was a former founder of the Dominica LeatherCraft Association, and all the groups came together and we made a purchase as one, so it was very easy and that is how we really came out of it," Hilaire added.

At that time the Association was sourcing material from a tannery in Montserrat, which shut down a few years later.

Replacing lost equipment is a struggle

Hurricane Maria of 2017 was another challenge to Hilaire and the industry.

"I lost over two hundred thousand dollars in machinery, tools, and more. One or two of the machines work, but it is more or less on a manual basis," he said.

Sadly, he has not been able to replace his equipment for so many years after the hurricane.

"It has been very difficult because the machinery used to help me to a certain level, but right now everything is done by hand, so it is a bit more difficult but I am working through it," he said.

These hardships did not deter Hilaire from his course nor did they cause him to give up his business.

"I always love it from the time I started it, it was like a passion so it just stuck with it. I'm married to it, so to speak," Hilaire said.

Despite the hardships, Hilaire is encouraging young people to join the industry if they have the calling to do so.

"They would have to have the love for it. It's a good area to get into, it would be good for the youth to get into, to try something," he said.

To date, Bionic Leather Craft has markets in Guadeloupe, Martinique, Texas, and New York and supplies the demand in other regions around the world.

Its owner would like to see more be done to boost the leathercraft industry in the country.

"We need more assistance from those above to help us with incentives on duty-free the material. Funds like grants to obtain machinery and such would be very important," Hilaire said.