In his second letter to the public, attorney-at-law Henry Shillingford, who was arrested and charged for obstructing the police, says he had a right to walk on the public road 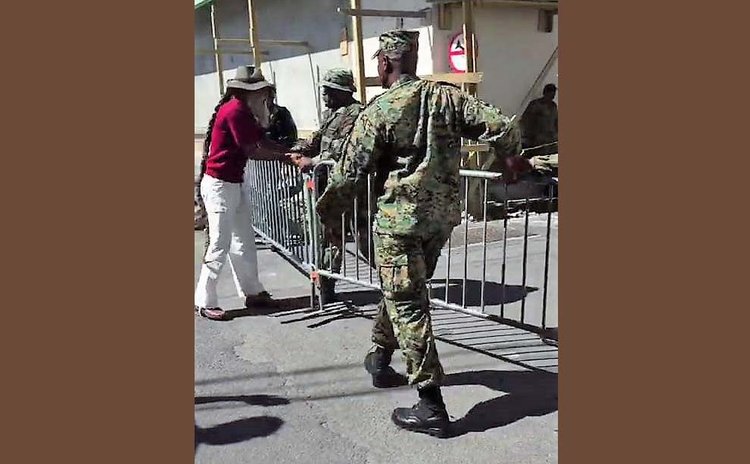 Henry Shillingford and police officers at the Roseau Bayfront

When I left you in the last letter was at the point where the TOY SOLDIER had refused the Acting Registrar's request to allow me in the Registry building. After telling him if he is crazy and does he know what he just did…" he said again you not coming in here. Then ...as seen in the video circulating… I threw down the barrier and said: "If I want to I can go on the Blvd." The point there was the total unawareness of the SOLDIER as to RULES as to the Registrars role, in fact police recruits do not get a law class while training at Morne Bruce.

I then walked away and went around the corner to the Long Lane side. There amongst 4-5 "soldiers" I saw a large red man, his demeanor made him appear to be the commanding officer. He was dressed in an army uniform in the distinctive pattern of the Jamaican camouflage print (more leopard, less tiger). I knew this, from post- Maria where Jamaicans soldiers (JDF) lived up to their "bad" reputation; maybe he thought that leopard one made him Look BAD too.

I called him over, he had a name badge, CORBET, it said, a double bar chain on a button. I aggressively told him "you know that one of your TOY SOLDIERS just refused the Registrar from letting me in; does he have any idea what he just did?" To which the Jamaican Camouflaged CORBET replied: "But you not dressed for court." If the commanding officer could give such a flippant response to a serious allegation, why one should be surprised at TOY SOLDIER NO RESPECT comment. You see WHY we have a problem here.

"So you think it's only Court that is there", I responded, "I know that's your only concern keeping certain people from going to Court, and putting others in, but that is the also the Registry, the Supreme Court Registry. It is there my work can only be done it is there all legal things happen." He then allowed me in. From Cork Street to the next lane I passed another 10 men in various army uniforms. There were another five or six properly dressed police in matching blue uniforms, one in khaki. I went through the back door of the Registry and went up the step that lawyers are allowed to use; it leads to the Land Title Section. I went in to let the staff see I had gotten in and to inform Ms. Auguiste, the Acting Registrar.

I proceeded out from the Title Section down through the Registry and then down the front steps onto the Dame Eugenia Charles Blvd. Once there, I saw a wide empty Blvd, on a working morning, so I went in the middle of the ME Charles Boulevard and admonished the people to break down the barrier and come onto THEIR STREET.

Because it is the Public's Right of Way. It is one of the oldest rights people have and still retain today. It was a fundamental right. This ancient right existed before democracy. During the time of Kings – the right to pass and re-pass over public road was a sacred right. It was known then The King's Highway(s) and the use of it by his subjects was unquestioned; it was also in his interest as an inherent right of commercial social and human life. It's like the rights as stated in the first letter; these are unwritten laws being A-Priori before the written law these are "PRINCIPLES" upon which the laws must be based and interpreted even by the Constitution.

In fact the rule is, you cannot stop on the highway except to load and unload. You need NO PERMISSION TO WALK ON THE PUBLIC ROAD. The Government must seek your permission to stop the public street from being public right of way e.g. yearly Carnival Orders also. "Did You Know" DASPA NEEDS AN ORDER to stop thoroughfare on Dame M.E. Charles Boulevard for Cruise Ship days. All protests, you will note, people are marching, they are moving. Police are there to manage the march for public safety not for arresting or cordoning off roads. You will also note it is when people sit in is then they are arrested. As stated because you cannot stop on the highway.

In order to demonstrate that principle i decided to march up and down the Boulevard holding up an imaginary placard. I did this twice saying:

Then I heard someone say "that's enough Shillingford". It was the Jamaican camouflage to which I responded, "@#$%^&*(….^%#!" and walked back into the Registry and up the stairs. At the top I looked back I saw that Jamaican camouflage and a 'Toy Soldier' accomplice not in JA camo, seemed to be following me.

Being in the Registry, I coolly walked through the hall of the Registry acknowledged the staff and down the same back step. As I got closer to the bottom I noticed they were closer behind me probably as I had calmly walked. When I reached the bottom, now facing and going toward the door, in front of me another 8 – 9 TOY SOLDIERS stood. Just then I heard the Jamaican Camouflage say stop him and one of the TOY SOLDIERS stepped in my path preventing my passage.

Jamaican Camouflage then came from behind me and grabbed my left elbow aggressively and pushing forward (to where I was going anyway - IT IS THE ONLY WAY) said 'let's go' to which I flung my elbow back and said "UNHAND ME BWOY!" Almost simultaneously his accomplice, behind me, put me in a chokehold, bent me over and Jamaican Camouflage punched me to my head 3X, but what was literally killing me was the chokehold.

Even after Jamaican camouflage beat me I was still being choked by his accomplice and I had to make a desperate motion to Corbette, that his soldier boy was stifling me. Corbette actually had to pry loose the Tehber' accomplice boy chokehold while encouraging him saying "let him go, let him go." He finally let go, I held back my gasp and I then told them 'You all think you can hurt me nevah, CAUSE YOU SOFT LIKE VANILLA". They then told me I am under arrest. "FOR WHAT", I said. I received no answer.

It was not until next day at the hearing that I found out what I he alleged I did. Here the point is I had in fact done nothing further and more particularly he does not have power of arrest over me in the Registry; he arrested me in the Registry. I, as an officer of the Court have more right to be there than him as a policeman, certainly more than a Jamaican camouflage uniformed 'Toy Soldier.'

This is an ancient common law privilege, attorneys can only be arrested in the precinct of the courts for contempt; further and more particularly you cannot be in contempt of the Dominica court. There is no such thing as 'The Dominica Court', there is only THE SUPREME COURT OF THE EASTERN CARIBBEAN (ECSC). Like there is no Dominican money, only EC money, the Court, exactly the same one Central Banker, one Chief Justice. There is only an ECSC Court, no Dominica Court. Similarly as in all the OECS countries of the ECSC the Court sits in St Johns…in Castries ...in Roseau ...in Kingstown ...in Basseterre…in St Georges ...in Tortola etc.

Given this legal status there is grounds to argue that the Jamaican camouflage and his 'toy soldiers' were in fact in contempt of the CJ of the ECSC by arresting an Officer of the Court, within the precincts of the Court without directions from a Judge or the Registrar to do so. My legal team is now preparing the case to the Chief Justice to consider contempt charges against Corbette (Jamaica camouflage) and his 'Tehber' accomplice as well as the Police Chief as their commanding officer for the contempt shown to the ECSC Court on November 22, 2018 in carrying out military/police activity in such a manner so as to prevent free access of the public to the courts and public registered documents and the mis-treatment and disrespect of an Officer of the Court going about his business in the Registry.