Here's the naked truth: Dominicans can't be shamed into taking care of their rivers 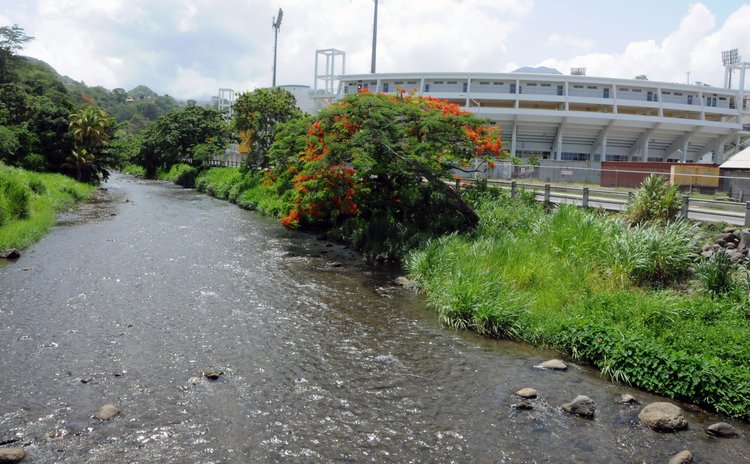 What's amazing is that we are seeing these rivers drying right before our eyes, like a wilting plant in the sun. And we say nothing and we do nothing. What a shame!

But it is obvious that Dominicans cannot be shamed into doing more to protect our rivers, to appreciate these gifts that our national anthem correctly states are "so rich and rare".

As we said last year, everyone who is concerned about the health of our rivers should say thank you to Catholic Priest Father Franklyn Cuffy for keeping World Rivers Day alive. Almost single-handily, Father Cuffy has kept Dominicans interested in WRD, the global campaign aimed at keeping rivers alive. In 2020 Cuffy, his WRD committee and the employees of Rosalie resort planned to observe WRD in a day-long event. That was Sunday, 27 September.

In response to a few questions via WhatsApp from the Sun, Fr. Cuffy said: "World Rivers Day is a celebration of the world's waterways. It highlights the many values of rivers and strives to increase public awareness and encourages the improved stewardship of rivers around the world.

"Rivers are the arteries of our planet; they are lifelines in the truest sense.

"In 2005 the United Nation designated the last Sunday in September as World Rivers Day to be observed annually. To date only 70 of the 193 member countries have been observing the day with participation of millions of people globally.

"Here in Dominica we began in 2006 with Waitukubuli Ecological Foundation (WEF) spearheading the event with a series of educational programmes nationwide.

"In 2008 the focus was the Layou River under the theme "Rivers are More than Water" and the coming together of fisher folks and the Layou Improvement Committee made it great success and has since been the signature of World Rivers Day in Dominica.

"However, as the years went by the focus was the making of money more than encouragement of the significance of the River. One is obliged to say that the dredging of the Layou River over 22 years is having a major impact of the life of the river and the community of Layou village. I dare say the situation of the Layou River is an indictment on the Government of the Day.

"Today the goal of World Rivers Day continues to be strengthening communities to appreciate our rivers.

"Now that we are celebrating the 15th anniversary of World Rivers Day, I think the time has come for the Government of Dominica to ratify the United Nations World Rivers Day event. Secondly, every effort should be made to encourage all stakeholders especially local governments to take responsibility of our rivers by entering into an Adopt-A-River programme".

We also asked Fr. Cuffy by WhatsApp what is the state of Dominica's rivers and additionally, what is the latest situation at the Layou River that was recently polluted by oil from an unknown source. At press time Father Cuffy had not responded, so we will wait some more for his response.

As you are aware, Dominicans prefer to remain silent about the sad state of our national patrimony, including our rivers, for fear of vicious and almost manic blowback from the ruling party and its supporters who erroneously believe that to be critical of your country is to be unpatriotic and even treasonous. But nothing is further from the truth.

As US senator J. William Fulbright said sometime ago: "To criticize one's country is to do it a service... Criticism, in short, is more than a right; it is an act of patriotism--a higher form of patriotism, I believe, than the familiar rituals and national adulation."

Looking for answers to our question concerning the state of our rivers we found it in a 2011 "National Integrated Water Resources Management (IWRM) Policy paper" prepared by the Environmental Advisors Inc.

It said: "The need for a water policy is abundantly clear: water is a precious national resource to be planned, developed and conserved for optimal and sustainable use on a holistic, integrated and participatory basis, keeping in view the needs of Dominica".

The report added: "Though Dominica is well known as 'the land of many rivers' and it is perceived that Dominica has an abundant source of water to meet all its needs, the reality is that this resource is finite, vulnerable, inextricably linked to the environment and impacted by development, human activities and climate variability. In fact, general sentiments of those familiar with the historic flow conditions of the rivers are that the abundance of water resources on the island are not the same as they once were".

That was nine years ago; the situation may have gotten worse.

As we said in an editorial on the subject last year, Dominica should be leading the way in celebrating, utilizing and preserving rivers and waterways and events like WRD should be one of the most important days on the island's calendar.

But it is not. Very likely it will never be.

A few decades from now when we will be praying, along with the rest of the world for some fresh water, because scientists predict a serious international fresh water crisis, God will answer: "What did you do with all the rivers that I gave to you? Remember, I gave you much more than I gave to any other country- and you wasted it!"