Expelled from the Laplaine Village Council in 2017, Jason Fontaine is re-elected by the people of Laplaine 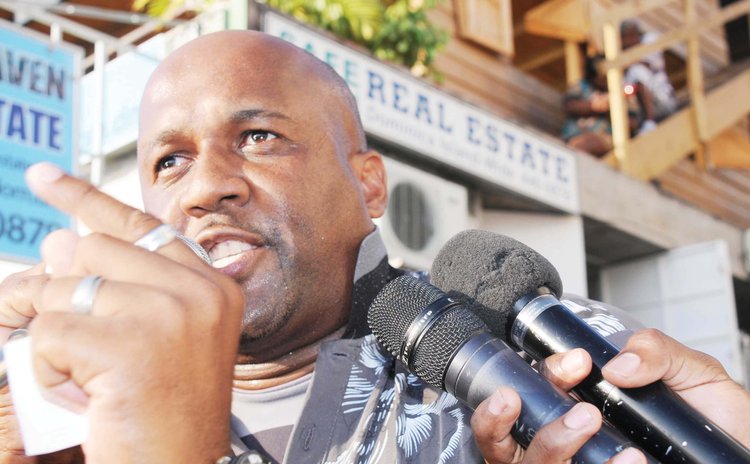 Jason Fontaine speaks at a UWP event in Roseau

Jason Fontaine, the re-elected councilor of the La Plaine/La Ronde Village Council, believes that politics should be kept out of the affairs of village councils in Dominica and the decision to remove him from the council was "political motivated". The allegations surrounding his expulsion from the council were "baseless and untrue," he contends.

"They had their political agenda and circulated untruths about me and demanded that the chairman Bateau sign a letter and resolution to me which he refused and not getting their wish they met (four of them) and removed Bateau as chairman appointed Mellow Jones James," he said.

Fontaine was first elected to the village council on January 9, 2017. However, according to the Acting Local Government Commissioner, Glenroy Toussaint, he was expelled from the Council under the Village Council Ordinance Chapter 190 (8) which states that "if any member of a council refuses to obey and conform to the rules thereof, it shall be lawful to the council after affording such member an opportunity of defending himself, by resolution to expel such member from the Council, and to declare his seat vacant and his seat shall thereupon become vacant accordingly."

Toussaint declined to say anymore on the matter.

Fontaine described the move to expel him from the council as "illegal" and said that "after consultation with my lawyer and with the people I decided to get re nominated and contest the by-election."

Fontaine won a council by-election in La Plaine on Monday October 1, 2018 despite what he said was "campaign done on behalf of his opponent by leading figures in the ruling Dominica Labour Party."

"They campaigned hard against me, put in all resources but the people had the final say and have spoken loud and clear. The people have given me a new mandate and we have matters to deal with including the chairmanship of the council which must be returned to Kervin Bateau," Fontaine said.

He warned that if that is not done then then a "legal" vote must be done with the eight councilors present.

Describing his win as historic, Fontaine said he ran on a momentum of inclusion and a need for change.

He continued: "La Plaine people have clearly sent a message that it is Jason they want…they are fed up of the old, they want change…be very careful we have to move on with the people's business and if this cannot be done in a proper and legal way then we will go back to the polls but it's time for work.

Fontaine claimed that a lot of money was spent and handouts given in the run-up to the by-election.

"Cash was literally handed, being given out for this election," Fontaine said. "People were given money in their hands to fix their little roof, their little window. I had a huge regime against me and I don't know why. Massive money was spent, a campaign was launched against me but the people of La Plaine have sent a clear message.

According to the preliminary figures Fontaine won 177 votes to Oscar Graham' 148.