Dr. Sam Christian is back on the campaign trail 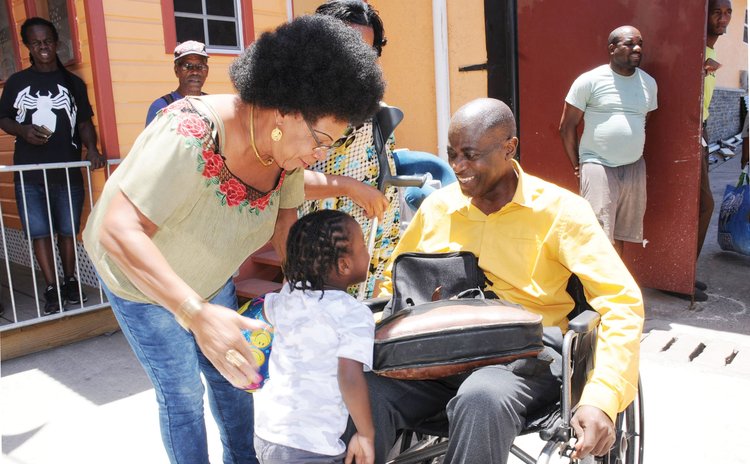 Dr. Sam Christian, who was critically injured in a vehicular accident in December 2018, is to resume campaigning as the United Workers Party (UWP) candidate for the Soufriere constituency, the Sun can report.

"What I can say to you is that while I am making steady progress, some well wishes are opposed to me getting back into the politics, but if duty calls as a true solider, I will respond," Dr. Christian said. "I am not at hospital and making steady progress and by next month (May) I will get a better idea of where I am."

He added: "While I have to do house-to-house campaigning, the reality is that if you are waving monies in the face of the people, they will rush to you so as I make my progress towards full recovery I am mindful that I can't move as freely as I want," he said.

Additionally, members of the UWP constituency association and party officials have confirmed to the Sun that John Blanchard who replaced Dr. Christian while he underwent surgery in Martinique has agreed to "give way to Dr. Sam and continue to work with him as the candidate."

On April 6, 2019, like a man who came back to life from the grave, Dr. Sam Christian returned to Dominica from medical treatment in Martinique to tears of joy, songs of praise, words of wisdom, many kisses and tight hugs and fist bumps.

Coming from the L'Express des Iles ferry on the Dame Eugenia Charles Boulevard, Dr. Sam walked with the help of a cane; party supporter Edincot St. Valle lifted him up from sitting positions; and he rode in a wheel-chair as Matt Peltier of Q95 FM interviewed him for a live radio show. Dozens greeted and hugged him.

During a short ceremony held under a make-shift tent on the sidewalk, organised by the opposition UWP, Dr. Christian spoke about his unusual experience after a freak accident at Pointe Michel on Saturday 1st December 2018 when the SUV that he was driving rolled over him shortly after he tried to enter the vehicle. He suffered a broken pelvis and severe damage to major organs. He was later airlifted to the hospital in Martinique where he underwent major emergency surgery.

At the return-home function, opposition leader Lennox Linton said that when he visited Dr. Christian at a hospital in Martinique, he saw someone who never gave up.

"This was not going to be an easy journey to recovery," Linton said he thought. "However, the person on the journey was a fighter, a soldier of rare quality, someone who never says die."

Apparently Linton was right: Dr. Sam is not giving up his dream of becoming the parliamentary representative for Pointe Michel, Soufriere, Scotts head and Galion at the next general election.

"Uncertainty is not good in politics and the people want to know…I am a servant of the people and will respond," Dr. Christian said.

So Dr. Christian resumes his battle against Denise Charles of the ruling Dominica Labour Party (DLP) and Jeff Bellot of the Dominica Freedom Party (DFP).

Charles was named the DLP's candidate at the recently held special delegate's conference at Londonderry in February. She had replaced Ian Pinard who resigned from parliament following legal issues related to an alleged relationship with a schoolgirl. In the by-election held in June 2016, Charles won 71% of the votes cast; the DLP has won the three general elections in Soufriere from 2005. The DFP won Soufriere with Frederick Baron in 2000.