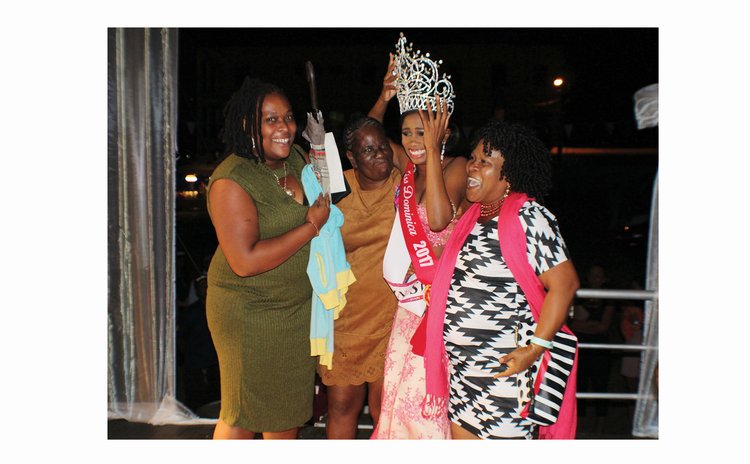 Queen Jade Romain and family after the crowning

Jade Romain had to be Miss Dominica 2017 after she blew away the other six competitors at the Eddie Andre Carnival City in Pottersville in the early hours of Saturday, February 25, 2017.

Jade, an employee of the National Cooperative Credit Union (NCCU) appeared at the contestant number seven position and started on the road to queendom with a talent piece conceptualized by St. Lucian Ronald Francis and was written by Kareem Bertrand. The concept was a call centre, "Clear Heaven", where Jade, as "Angelle", handled prayers as they come in. She was dressed in white and carried wings of an angel.

In the swimwear segment, Romain wore a swimsuit of royal blue, entitled "Moonlight in Paradise", that reflected the moonlight on the waters around the island.

Romain's costume "Fantasy of a White Peacock" was conceptualized by Jeff Coipel and built by Creative Dynamix; it showed a bird, a peacock, draped in white; the head of the peacock cowered Jade's slander body as she moved gracefully across the stage.

Speaking to the press after being crowned Miss Dominica 2017, Jade said she had no prior experience in pageantry and since she "worked so hard" she was very proud of herself.

"I know the other young ladies are very intelligent and talented and so it could have been anybody's crown because they all performed very well," she said. "I intend to continue to play my role as an ambassador to my country, Dominica, and to continue to push my platform which is mental illness and to, in anyway, provide a voice for the mentally ill in Dominica."

Henry's evening wear, "On the Gold Side of Pink", consisted of gold on pink in what she described as "Fun in Gold Appliqué. It showed off her body curves and she was indeed a "Mermaid Silhouette". It was sewed by Sharon Bobb Merrifield.

To the question: "What changes would you like to see from the youth", Henry replied: "I would want them to understand that nothing is impossible; get a right education, be good role models and become more spiritual."

The Second Runner-up was Terisa Lewis, a teacher at the Goodwill Secondary School and the daughter of the late Clifton "Coco Tea" Lewis who lost his life during the ravages of Tropical Storm Erika in 2015.