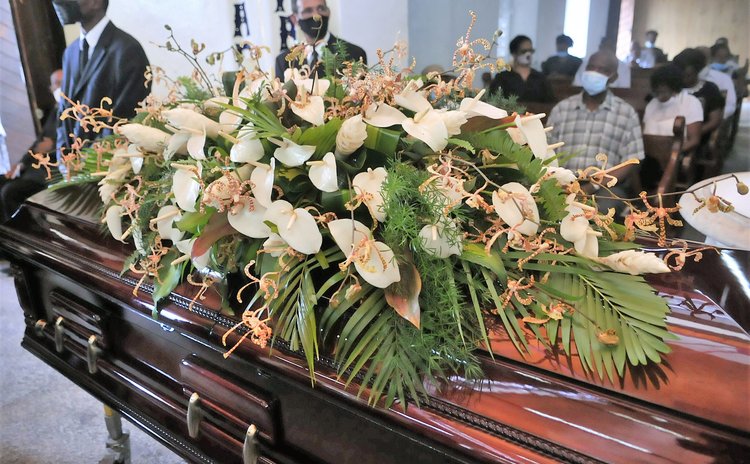 Coffin at a recent funeral service

On the other side of grief, many who have laid a loved one to rest are quickly confronted by the costly price tag attached to death.

Over the past five years, an increase in Dominica's death rate has reportedly resulted in the rise of funeral prices as the potential rate even for modest funeral services can be overwhelming.

The said increase has raised accusations of excessive price charging at a time when customers are at their most vulnerable.

The financial burden compounded with the grief of losing a loved one can cause traumatic distress and according to one individual who recently laid a parent to rest, the "dramatic" increase now soars into the thousands.

"Five years ago I buried my father and earlier this year I buried my mother. With the ongoing pandemic, we decided to have a downscaled funeral for her but the prices were even higher than before for what was quoted to us as the economic package," Jennifer Seaman told The Sun.

Deciding your loved one's final bed, coffins or caskets range from $2,800 to $15,000 according to information from one of Dominica's leading Funeral Home.

Then there's the cost of obituary/ death announcements which range from $1 to $2 per word.

Another prominent funeral home on the island boasted to The Sun that unlike their competitors they offer funeral packages "as low as" $3,500.00 extending to $12,000.00. Though none of the funeral homes we spoke to denied that there was an increase in rates, none confirmed the reason for such action.

According to Seaman, bereaved families face these mounting costs when they are at their most vulnerable period and they have no choice and little time.

"This is the reality in Dominica. The death of a loved one is hard enough without having to worry about how you'll pay for their funeral. We certainly need the government or someone to intervene," she said.

She advised that though death may sometimes be unexpected, proper planning can reduce some of the stress and financial responsibilities on a family in such time.

Apart from the prices incurred from the Funeral Home and other services involved in the burial, there's the practice of ‎what is now popularly referred to as "happy hour'' which has firmly established itself as folklore in Caribbean culture.

After years of consistent practice, funeral attendees expect to be treated and families, despite their economic reality, refuse to disappoint. It is now a deeply entrenched cultural practice, which Seaman strongly advises against.

She said such practice is yet another financial burden for families coping with the cost of death in Dominica.