Historic commercial flight from U.S. lands in Cuba, a sign of normalizing ties 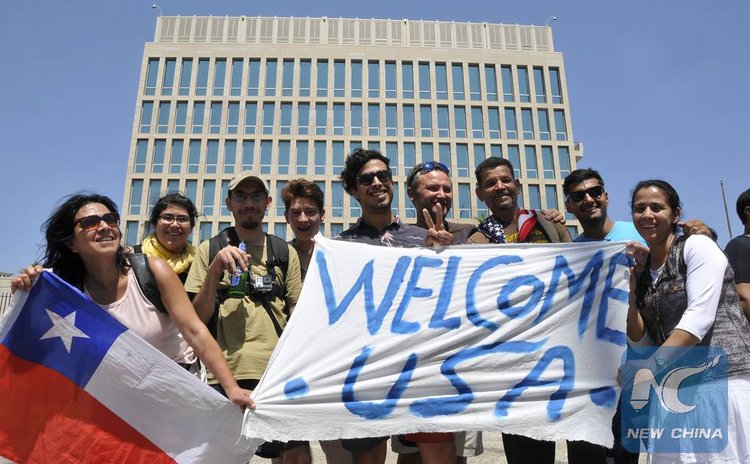 HAVANA, Aug. 31 (Xinhua) -- Cubans welcomed the arrival on Wednesday of the first regularly scheduled direct commercial flight from the United States, as a sign of normalizing ties between the two former adversaries.

The flight linking Fort Lauderdale, Florida with the central Cuban city of Santa Clara "seems to me an important step for the re-encounter between the two neighboring countries, cultures and governments, which can coexist peacefully as long as there is respect," said Havana resident Juan Carlos Gomez, 60.

"The prolonged enmity between Cuba and the United States has been frustrating and draining for both peoples, especially for Cubans, who have suffered firsthand the hardships of a more than half-century embargo, which continues to be an obstacle to efforts to normalize bilateral ties," said Gomez, who works as an electrician.

Commercial flights between the two countries were canceled more than 50 years ago as part of trade and economic sanctions imposed by Washington to punish Cuba's then fledgling socialist government.

One of the immediate impacts of severed ties between the two countries was that many Cuban families became divided by distance, as many left the Caribbean island to live in the United States, recalled Maria Gutierrez, 80 and retired.

In 1963, all of Gutierrez's uncles and cousins emigrated to Miami, home to the largest Cuban community abroad.

The flights, she said, "provide the opportunity" to bring families closer together, as the children and grandchildren of those who left many years ago will now find it easier and cheaper to visit Cuba, "as long as Washington allows it, of course."

Existing sanctions still prevent U.S. citizens from traveling freely to Cuba for tourism, though Cubans are given greater leeway.

Michel Garcia, 21, agrees with Gutierrez. That the young university student is aware of the year flights stopped is an indication of the impact the event had for Cubans, who suddenly found themselves isolated from their closest neighbor.

"Hundreds of thousands of Cuban families are divided by the Straits of Florida, and resuming direct flights suspended in 1961 is very good, both for those who can go to visit their relatives in the United States, and for those who are there and want to visit us," said Garcia.

Garcia said she hopes to meet students from other countries in Cuba or abroad, if she gets the chance to travel, perhaps to the United States. Though she considers Cuba her home, and would always return.

"I am one of those who dream of a flourishing Cuba, and that's why I want to work from here, where everything I most love is," she said.

As with most people old enough to remember the decades of U.S. hostility toward Cuba, Roberto Madrigal, a retiree and resident of the southern city of Cienfuegos, welcome the flights, but cautioned Cubans against letting their guard down.

"We Cubans must be careful and not erase our historical memory, that is, promote bilateral ties, welcome resumed flights with the United States, but sleep with one eye open, like dolphins," Madrigal said in a telephone interview.

U.S. officials recently authorized up to 110 daily flights between the two countries, 20 to the capital Havana and the remaining 90 to nine regional airports.

However, flights to Havana still await final authorization, since applications from airlines wanting to cover the route surpassed the number allowed threefold.