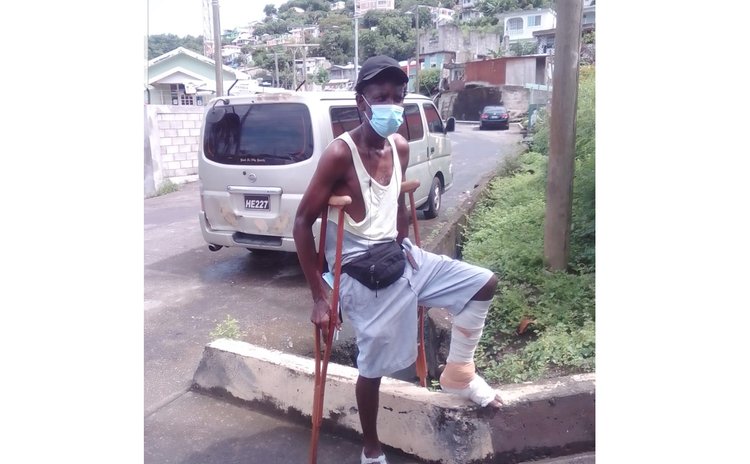 A Fond Cole man who is now left to find nearly $5,000 for a medical procedure is in search of the culprit who injured him and who has turned a blind eye.

Andy Roberts, 44, also known in his community as "Foot" or "Footy" says for nearly three weeks he has undergone much pain and suffering due to a hit-and-run incident.

Speaking to The Sun, Roberts recollected the evening of July 31, 2021, sometime after 7:00 p.m. when he was knocked off his feet by a white bus on the Edward Oliver Leblanc Highway in Fond Cole.

"I left my home and I was crossing the road to go by the fisheries and all I see was a bright light. Next thing I just fall on the road with a sharp pain in my foot. The person was driving a white bus but I didn't get the license plate because as soon as they hit me they drive away like I was a dog or something. My friend who was driving in the same direction see me and he stopped to help me," Roberts said.

He was transported to the Dominica China Friendship Hospital (DCFH) where he was admitted as a patient for one week and informed by a doctor that he needed surgery on his leg.

"The doctor said the bone is dislocated so I have to get some screws and a plate to put in my leg. I have a cast in my leg but the doctor told me I need to do that surgery as soon as possible before things get worse. I can tell you I am in a lot of pain," he said.

Roberts disclosed that he was quoted a figure of EC$4,500 for the procedure; however, he said he is not financially able to meet that cost and is appealing to the driver to assist him in that regard.

"I'm not looking to bring the person to court or to the police, all I want is a little help. I have a lot of pain so if they just show up and give me the money to do that operation on my leg it will be much better for me. $4,500 is plenty money and I doh have that," he said.

He further pleaded with the driver: "I have been down for almost three weeks; I cannot do no work to feed myself. Please just come and help me to pay that money to fix my leg. That's all I'm asking for."