HM The Queen honours young people who are changing the world 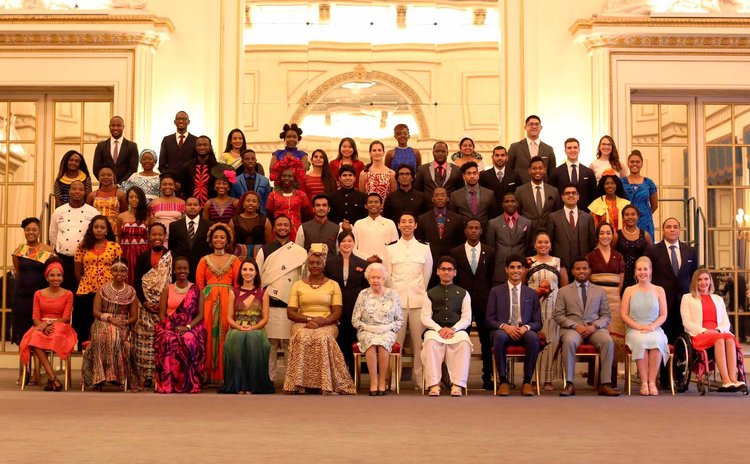 The Queen's Young Leaders of 2017 with HM The Queen

Yesterday, Her Majesty The Queen presented young people from Dominica with a Queen's Young Leaders Award at Buckingham Palace, to honour Rianna Patterson who has been chosen in recognition of her dedication to helping ease the impact dementia has on individuals and families, and Eber Ravariere who is creating opportunities for young people through agriculture. His Royal Highness Prince Harry joined The Queen in congratulating the winners at this special ceremony.

The Queen's Young Leaders Awards programme, now in its third and penultimate year, celebrates the achievements of some of the most exciting young change-makers from across the Commonwealth, who are all dedicated to transforming lives in their communities. From tackling bullying head-on in schools, to preserving the environment, to promoting gender equality, these young people are taking the lead in driving change in their communities.

The celebrations continued after the ceremony at Australia House in London, where the Award Winners, guests including Australian comedian and presenter, Adam Hills, and Prince Harry came together to help launch the search for the final Queen's Young Leaders.

Speaking at the ceremony, HRH Prince Harry said: At home and abroad, I see people - especially young people - doing incredible things...They are creative and innovative, and most importantly, they are committed to making the world a better, more optimistic, and compassionate place. That's why I am honoured to welcome this year's award winners here tonight. The Queen's Young Leaders award recognises what these incredible young people have achieved - not for themselves, but for others - for their peers, for their communities, for their environment, and for those less fortunate.

Sir Mo Farah said: "It's so great to be here with the Queen's Young Leaders today! Their passion and dedication to helping people's lives in their home countries is amazing. You can really see how much change these young people have made through their hard work and they absolutely deserve this honour."

Liam Payne said: "Meeting the Queen's Young Leaders today as they receive their Award from The Queen has been amazing. It's really inspiring to meet people my age doing such important work to help people in the ways they are. It's an honour to be part of their celebration."

The Hon Alexander Downer AC, Australian High Commissioner to the United Kingdom, said: "I am delighted to welcome these exceptional young people from 36 Commonwealth countries to Australia House this evening. The leadership these talented Queen's Young Leaders have shown, and the lasting difference they are making in their communities, is inspiring.

Dominica Award Winner Eber Ravariere, said: "Humbling" is the word which best fits the privilege of being one of the Queens Young Leaders Awardees. Truly Humbling, It's been an amazing week here in the UK meeting all of the other Leaders. Being part of the Queen's Young Leaders family is really exciting and I'm looking forward to seeing what the future now holds."

The Queen's Young Leaders programme was established in 2014 to help talented young leaders to realise their potential and achieve even greater success in the future that will benefit people's lives across the Commonwealth for generations to come.

As part of the Awards programme, Queen's Young Leaders, including Dominica's Eber Ravariere and Rianna Patterson, gain unique access to training, mentoring and networking designed to improve their leadership skills. Ahead of receiving their Award from The Queen, this year's Award Winners attended a reception at 10 Downing Street, visited UK headquarters of global social media company Facebook, and met with senior executives at the BBC World Service. They also met the Commonwealth Secretary-General, took part in workshops at the University of Cambridge, had meetings with UK business leaders, and visited projects that are changing the lives of vulnerable people in the UK.