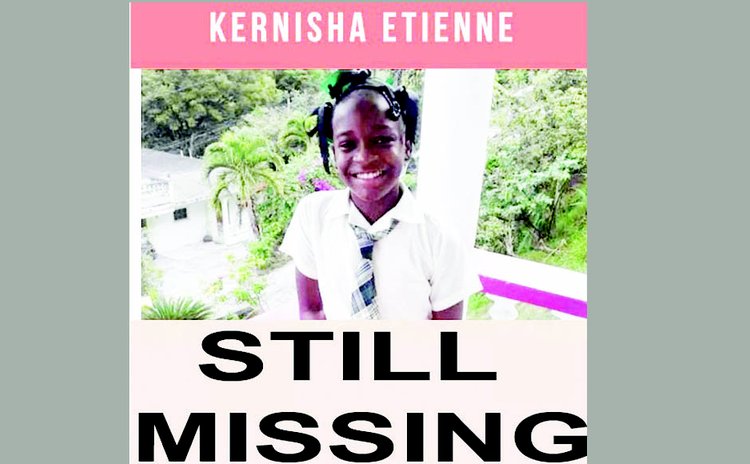 On day 21 of the search for missing 12-year-old Kernisha Etienne, Warner resident Earl Bruno says that his gut feeling indicates that they should no longer be looking for an alive child, but instead the search should now be focused on finding her remains.

"Something in me is telling me that sadly she has been killed in the worst way," Bruno, who's been involved in the case from inception told the Sun.

"I am not the only one who feels this way, throughout the community of Warner, many people have now given up hope and we are just trying to figure out where this child's remains could be to bring us closure" he added.

A senior police officer conveyed similar remarks and informed the Sun that discussions are now being held to call off the search by mid-July for the missing child, who was allegedly abducted from her home in Warner at about 11:30 p.m. on June 7.

"Though we've all been optimistic and kept our hope high from day one that she will be found and return, the chances of this are now slim to none as we approach day 30," the officer revealed.

However, many like Edgar Savarin chose to remain hopeful and told Sun that the child will be found soon.

As to how he believes she's been able to survive on her own, well he doesn't think that she's alone, but he and many others believe that Alexander may have been soliciting the assistance of someone, therefore, the child is safe.

"I went in the bush for two days, just like hundreds of other officers and civilians, there is no way that if this child was still out there that her body wouldn't have been found already," he said. "I acknowledge that the bush is wide, but I don't believe that this guy could have gotten far with this young girl to a point where he was able to kill and bury her, and not even trained dogs can pick up her smell."

As the search for Etienne continues, attention is now being placed on the body of her alleged abductor Keyan Alexander, a resident of Belles, who was shot by the police on June 18, 2022, on day 11 of their search for him and the missing child.

Tiyani Behanzin, the attorney for the family of Keyan Alexander is raising suspicion over the police report of his death and believes that it may be a case of an extrajudicial killing.

Behanzin has revealed that members of the family have not been able to identify his body, and he also raised suspicion over the state's decision to undergo an autopsy without the family's involvement as well as showing the body to the jury at the inquest before it had been identified by the family.

"That is unlawful conduct," Behanzin said. "It may be that we bend things here because we're a country that is used to this kind of behaviour and conduct where nothing is important, not even the Constitution or whatever principles or requirements that that document suggests that the conduct should be".

He added that such "shenanigans" are unacceptable, and only prove that there may be some kind of "machinations taking place, and masquerade as if there is some interest in justice."

"We remain vigilant to ensure that the family receives the questions and answers that they want. But this is beginning to look like extra-judicial killing, " he said.

In addition to asking for assistance from our neighbouring countries as well as the Regional Security System (RSS), the main opposition United Workers Party (UWP) is also calling on the President of Dominica to appoint a commission of inquiry to inquire into the abduction and disappearance of Kernisha Etienne, the death of Keyan Alexander, and the actions of the Police, be looked into via a thorough independent investigation.

"The police reports of the capture and death of Keyan Alexander have only made a bad situation worse. Riddled with misleading information, false narratives, and impractical timelines of the police engagement, the story that we've been given bears the resemblance of an orchestrated cover-up designed to absolve bungling police officers," the party said in a statement.

"There are simply too many inconsistencies, falsehoods, and examples of willful incompetence in the police account from senior officers who have, in the past, demonstrated an energetic aversion to the truth," they added.

Attorney General Levi A. Peter has come to the defense of the Commonwealth of Dominica Police Force (CDPF) following all of the suspicions raised by their actions.

According to Peter such individuals "willfully and maliciously engage in totally unwarranted and unhelpful speculation, conspiracy theorizing, and unfounded accusations against the police and others at a time when maximum cooperation and cohesive effort should be the priority of us all."

He said Behanzin's statement is disappointing and concerning for several reasons, including its "inexcusable misrepresentations and factual legal inaccuracies."

The Attorney General called on all who, according to him, have been making false statements, accusations and causing "general mischief" in relation to the circumstances surrounding this matter, to cease and desist from engaging "in such negative behaviour" and instead, lend their full support and assistance to the efforts of finding and returning Etienne to her family.

"Whatever criticisms, accusations, theories can wait and be delivered with equal force and effectiveness in due course, once the primary objective of finding Kernisha has been met," he said. "Now is no time for grandstanding…let us pool resources and do everything in our collective power to find and return Kernisha to her family."