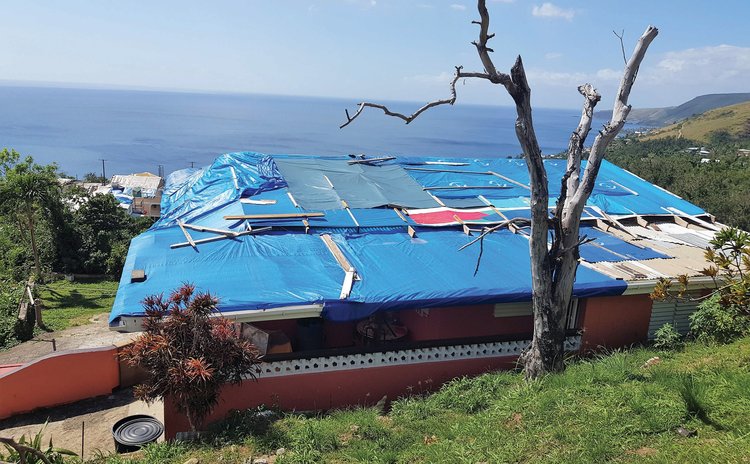 This is not the sort of treatment Jeremy (not his real name) expected from his landlord. Not after the terrors inflicted upon him and the entire country by Hurricane Maria last September. Not after what happened in the immediate aftermath of the unforgiving storm.

While the hurricane left in its wake a country full of debris from flattened houses, Jeremy was fortunate to be left with a roof over his head, unlike his landlord. And for three months following Maria, he was forced to house the landlord and his family. Yet he had to paid rent. The full rent.

However, after the landlord had his own roof replaced and moved out, Jeremy received the shock of his life as a tenant: the landlord raised his rent.

With the country facing a severe shortage of livable accommodation, Jeremy's story is not an isolated one, local observers say.

Housing officials say they do not have an accurate count of the number of rental homes destroyed by the storm, nor do they know how many are available and what the demand is.

However, according to one senior official, it would come as no surprise if renters were fleecing people.

In addition, the official said, the insurance companies have already made it clear that they plan to jack up premiums – the insurance companies have already indicated that rates could rise by as much as 40 per cent this year in order to recoup losses from hurricanes Harvey, Irma and Maria – therefore, "if that happens, can you blame the landlords?"

Eight months after Maria housing officials are still not able to say how far the country has progressed in terms of "statistics on housing, in terms of numbers and percentages, I cannot tell".

What is clear is that the deal with the Barbadian company, Preconco – first reported by The Sun in November last year – to provide 1,000 prefabricated houses has not been going well.

In the six months since the deal was made public, the company has produced just twenty units – ten for Pointe Mitchell which are virtually complete, according to housing officials, and ten for the Carib Territory, "which are still on the way".

The reasons for the lack of progress are varied according to a senior government official who would say no more than "the Barbadians have their problems and we have our problems".

"To bring in the pre-cast [houses] we are having some difficulty," the official told The Sun.

However, whatever the problem, Preconco is planning to circumvent it by setting up shop here.

"They proposed to build a plant in Dominica - land was identified at a spot in Jimmit near the Petrocaribe plant so they can make the units here because they still have 980 to build," the government official said.

Even as the Roosevelt Skerrit administration attempts to ease the housing shortage – the Sharjah, United Arab Emirates-based Montreal Management Consultants Est, which was first brought in to build homes in Bellevue Chopin for the displaced people of Petite Savanne after Tropical Storm Erika, is building 400 multi-storey homes on the east coast from Delices to Castle Bruce as part of the 1000 units they are to build – progress in rebuilding the country's housing stock has been stymied by a shortage in qualified workers.

"People have left, and of those who remain on island only a little bit are in construction. So the brining in of labour is something that is being bounced around by government and otherwise," one senior public servant has revealed.

There is also the issue of concessions on building material granted by government after the storm, and extended in March.

However, one government official has confirmed to The Sun that contrary to what many thought when Skerrit announced the extension, "once the extension was granted it wasn't all that it was, however, I still think it was good that they still gave concessions".

Although the official was unable to immediately provide details, one person affected by the changes has complained that people who import material under the terms of the extension are being asked to pay 23 per cent in import taxes, nearly five times the five per cent immediately after the hurricane.

According to this person, when the concessions were first announced there were exemptions on import duties, value added tax, custom service charges and the environmental surcharges. However, not made clear when Skerrit announced the extension on state-owned DBS Radio, was that only the import duties were being waived.

"Many Dominicans were waiting on the insurance to rebuild, so how the hell you can raise the taxes from five per cent to 23 per cent?" one upset homeowner told The Sun.