"I am the change"

Gretta Roberts at her launching 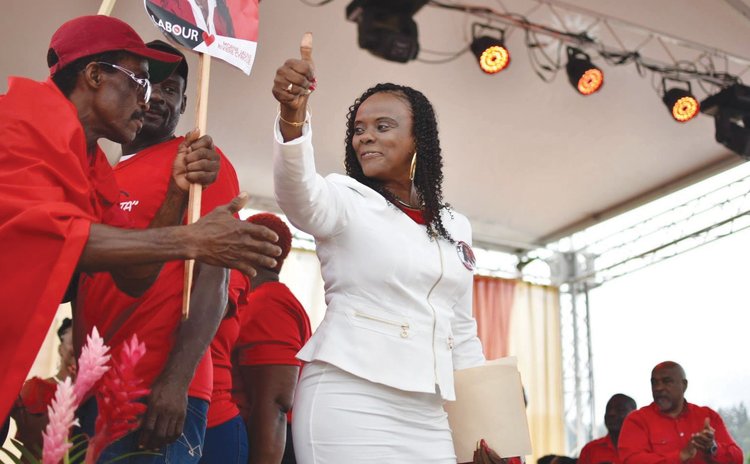 Greta Roberts and supporters at her launch at Grand Fond

Prime Minister Roosevelt Skerrit is not contesting the next general election on his 15-year record in office but on his administration's 18-month performance at rehabilitating and rebuilding Dominica after Hurricane Maria, The Sun can report.

He says he wants five more years to complete the job.

Speaking Sunday evening at the launching of former primary school principal Gretta Roberts as the Dominica Labour Party's (DLP) candidate for the Grand Fond constituency, Prime Minister Skerrit said Roberts' launch was not the "beginning of the election campaign" but the "acceleration of a programme started 18 months ago."

The launch-rally in Grand Fond was a typical election campaign event of Barbadian political strategist Hartley Henry- large and carnival-like, a sea of hundreds of supporters dressed in party red dancing and jamming to blasting music. Daddy Chess, the lead singer of the Swinging Stars band (dressed in red pants, red cap and white polo-shirt) for instance, sang NC's calypso hit "Your Humble Servant" as the rain poured: "I'm your knight in shining amour/ Sweet Dominica, you know how much I care".

Then Roberts, with the cadence of a principal addressing a PTA meeting, told the crowd that like Jerimiah and Joshua she was answering the call to lead the Grand Fond, Morne Jaune, Riviere Cyrique constituency.

"Today I proudly, yet humbly announce today that I am without a doubt the Dominica Labour Party candidate for the upcoming election," Roberts said adding that she is ready to begin the "transformation of this constituency" and that she was the change that the area needs.

Roberts spoke before Prime Minister Skerrit declared that she was part of his new "reconstruction" firm to rebuild Dominica after the island was destroyed by the category five Hurricane Maria on 18 September 2017.

"This upcoming general election is therefore not about the reelection of Roosevelt Skerrit and the Dominica Labour Party," Skerrit said. "It is not about trying the United Workers Party or giving Lennox Linton a chance. This upcoming election is about first and foremost giving Dominica its very best chance at success."

Using the analogy of a home-owner who hired a fraudulent contractor to rebuild his hurricane-damaged home, Skerrit said on Election Day the Dominican voter is "selecting a main contractor."

"Your task in the coming weeks and months will be to select a construction firm to further the rehabilitation and construction of Dominica," Skerrit said. "We need therefore to separate the froth from the beer."

Utilizing his usual technique of fear-mongering and the deprecation of opposition leader Lennox Linton, Prime Minister Skerrit said Linton and the UWP had few friends in the world to depend on if the UWP wins the next election and that if Linton could not lead Dominica during the best of times how could he lead the country after Hurricane Maria.

"Do they (the voters) understand the carnage they would do to this country by placing it in the hands of a driver who cannot drive," he said. "This is not a lucky dip."

Skerrit announced that his government will be "moving earth" soon for the construction of a state-of-the -art cargo and cruise berth, undertake a "major road rehabilitation drive", begin "a massive national lights rehabilitation programme" and he declared that "agriculture in our next term will not be what it was before".

The DLP will be launching, its candidate, Chekira Lockhart-Hypolite, for the Roseau South constituency in two weeks, Skerrit announced.