"I have lost a friend, sister, confidant, colleague and sister" 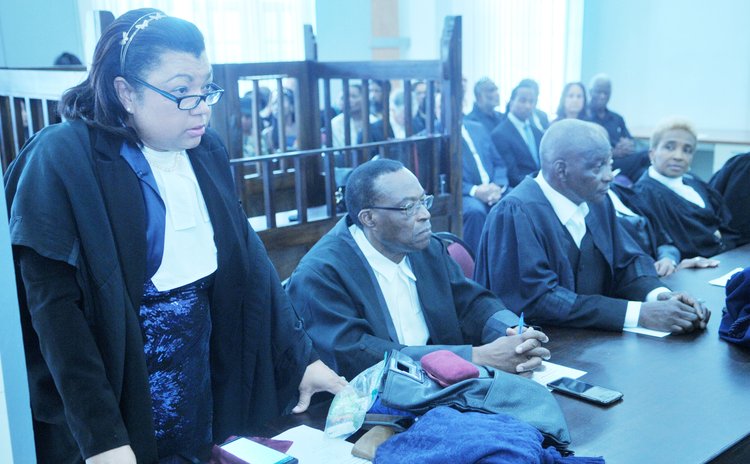 The courtroom was packed to capacity with not only members of the legal profession but also with family and friends who gathered at the High Court in Roseau for a special sitting to pay tribute to Attorney-at -law Noreen John who died in Antigua on May 21, 2019 while she was en route to London to seek further medical attention.

"I was impressed with what was also said about her as Director of the Legal Aid and I want to say that this is something which is lacking as a criminal high court judge. There is the need to establish an efficient and functional and legal aid department. I know that her death has created this void and I hope her colleagues can fill this void," Justice Charles-Clarke said.

She called the death of Noreen John "shocking."

"I am sure those close to her will feel a sense of personal loss but there are lessons to be learnt from her life and death. Her untimely passing provides an opportunity for reflection for all of us. The message is we need to take care of our health no matter the circumstances and to have a relationship with our maker, God. She was at her prime and had great plans for her future…a budding politician. I pray that God will be merciful upon her and Father Abraham will welcome her into his bosom," Justice Charles Clarke said.

For Justice Bernie Stephenson the news of the passing of Noreen John was "sad and shocking."

"As an attorney she appeared before me and was always prepared and she was one who always treated this court with respect and courtesy. She was one who was always graceful and calm. She never said I was and I know. While no words can heal your pain know that we are there for you," Justice Stephenson said.

Also speaking at the special sitting was President of the Dominica Bar Association, Mary Ariel Roberts, who described the late Noreen John as "a soft spoken individual and a true lady…her word was her bond," Roberts said that she is yet to come to terms with her passing and she spoke glowingly about John's work ethic.

"If she was unable to assist she would say and offer so solution…she would always attend all activities of the Dominica Bar Association," Roberts said. "She has left a void and was a person of conscience and we will miss her in Dominica and we who are left behind I hope that we learn from her legacy. Gentle woman, quiet morning star, rest in peace."

Singoalla Blomqvist- Williams a personal friend of the deceased, spoke of her involvement in the Grand Bay community, the Dominica Council of Women and other groups.

"I am a better person having met Noreen John. She was approachable and we bonded instantly. She never had a bad word to say to anyone; she was a genuine friend. She had a passion to make things better in Dominica," Blomqvist- Williams said.

She continued, "Her legacy is proof that she was able to make a difference and her work at the Small Projects Assistance Team (SPAT). She was a champion for women, the poor and down trodden. She had a determination and drive and offered to serve at the highest level. She was close to her friends and family…a humble, elegant, generous, kind and soft spoken individual, beautiful inside and out.

"I will miss her terribly. I have lost a friend, sister, confidant, colleague and sister. She was a champion and made Dominica and Grand Bay proud, Rest in peace my friend," she said.

Also paying tribute were lawyers Darius Jones, Heather Felix-Evans, Tiyani Behanzin, Ronald Charles and Henry Dyer. Bernard Wiltshire who was filled with emotions while speaking had to be consoled.