"I thank the Lord that I'm alive."

Kathleen Jno Baptiste-Cornelius, the President of the Dominica Cancer Society is The Sun's Person of the Year 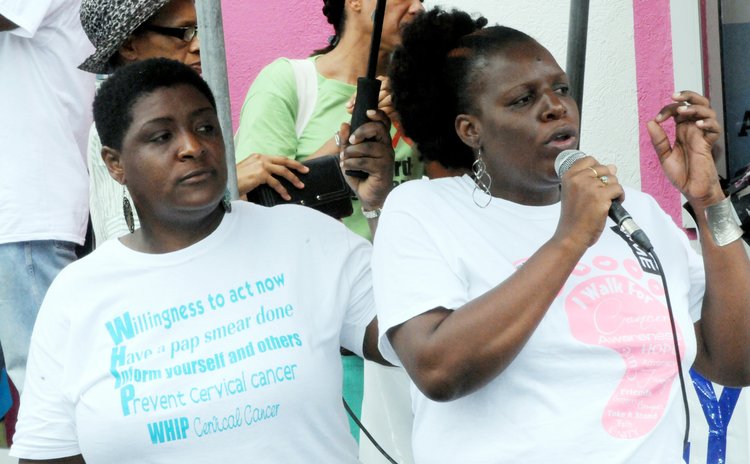 Kathleen Jno Baptiste-Cornelius wakes up on mornings, looks to the heavens and gives God thanks. For everything. Most importantly, for life.

"I thank the Lord that I'm alive."

Having been stricken with cancer, she knows what it feels like to live with the fear of a "death sentence" hanging over her. Yes, she has survived it, but the emotional scars linger. The fear that it might strike again is never truly gone. But she prays prayers of thanksgiving.

"I'm a survivor but you always feel [worried that it can return] especially when you're not feeling well. You become anxious. I thank the Lord for life, for the blessing. I thank him for life. Sometimes I think I bother him. I pray that I never see this disease again," Jno Baptiste-Cornelius told The Sun in a telephone interview from her home in Kings Hill.

She comes across as reserved and unassuming. She hesitates for what seems like an eternity when asked to talk about herself. When she finally speaks, it's to confirm the obvious.

But then she cooperates. She takes a deep breath and talks about where she lives, what she does and her immediate family. She speaks highly about her daughter, Tarmyhre, and her husband, Ivan Cornelius. But her life story had to be drawn out of her and is related in a rather humble tone. She really would prefer to discuss something different altogether, like the Dominica Cancer Society which she leads.

Born and raised in Newtown, her early life was a rather quiet one. Timid, even. She had very few friends and there was hardly any involvement in the community outside of activities at the Newtown Primary School which she attended, and the Christian Union Mission Church where she worshipped.

"Growing up, I was rather timid, because we were brought up in a Protestant church so it was home to church and home to school. I was not involved in anything in the community, to be honest. My life revolved around my church . . . I was very reserved. My friends were in the church and the children who I grew up with in the yard where I was brought up."

The "yard" felt like family –anybody, presumably adults, in the yard could discipline the children, she said. So people like the Baptiste family helped keep her on the straight and narrow.

Her mother had migrated when she was about two years old, so she was raised by her aunt, Mary Vidal.

"What I am [today] are the morals she instilled in me," she said of her aunt who now lives nearby in Kings Hill.

The young Kathleen became a lot more engaged as a student at the Goodwill Secondary School. She began to interact with fellow students and made friends. And the teachers were committed and interested in their well-being.

"It help improve my self-esteem, it provided me with public speaking skills. What I have become today I owe a lot to my school." And to her home, of course.

"I had supportive teachers. Our teachers made us believe we could [achieve] and those values along with what I learned at home made me into what I am."

She joined the teaching service 20 years ago, her first stop the Goodwill Secondary School Junior Secondary Programme, where she taught food and nutrition and gave hope to students there, instilling the very principles that were instilled in her by her teachers not very long before.

She moved to the Dominica Grammar School (DGS) over 10 years ago, where she now heads the business department and teaches accounts, principles of business and economics.

She still loves teaching, she tells The Sun, despite its many challenges.

Yet, nothing prepared Kathleen for the new challenge she was about to face from 2009. Things had been going along well with her life; she had been married two years earlier, she was preparing to pursue a master's degree and was looking forward to extending her family.

"And I was at school one day and discovered a lump under my arm, and I checked on it and found out I had breast cancer."

It seemed like her world had crumbled, the earth was closing in on her and the fear began to paralyze her.

"I thought it was a death sentence. I went to the various stages of grief. I was angry. I went through depression."

However, for this devout Christian, there was the "driving force" of her close and extended families, her church family and others behind her, encouraging her, providing counsel and support.

"Had it not been for them I would have given up," she recalls. "When I went to do surgery the nurse found I was in denial . . . the process between surgery and awaiting results was to some level tormenting. I would be at home and you're waiting to find out, has the cancer spread?"

The results revealed she had stage one cancer and it had not spread to the lymph nodes. But the many challenges lay ahead.

Then a new family began to emerge. Juliet Lewis from the cancer society, herself a survivor, would speak to her and calm her and tell me what to expect. Dr Hendrix Paul became more than just her doctor. He too, became family.

"I could go to him and cry. I could go to him and speak about anything. When I started at the society and a lot of the members were dying, and people who were diagnosed with me were dying, I could just come in and speak to him. He moved at that point from being a doctor to a friend, a confidant who I could speak with. The things I couldn't tell my family I could tell him."

Treatment wasn't cheap and that drove Jno Baptiste-Cornelius to become involved on the Cancer Society, something she feels a lot more comfortable discussing.

They formed support groups which provided counselling and emotional support, and as a result, the organization became vibrant again. Yet, while this was appreciated and invaluable, many patients simply could not afford the treatment.

"So we started to raise funds - and I say 'we' because it's a group effort – and we organized cake sales. But what became our major fund raiser was our walk for cancer." They also "beg a lot" and government and the Dominica Social Security have become their primary benefactors.

The society began providing financial assistance to those in need by paying for chemotherapy. But as the disease becomes more widespread, the demands continue to grow, so they do more, including advocating for reduced cost of the treatment.

"When we started I had to pay $1800 every three months. For most persons that is more than a salary. At the cancer society one of the things we have been able to do is advocate on behalf of our members for the cost to be reduced. So now it's between $100 to $800. It has dropped significantly compared to what it was eight years ago."

The society also supports children of people who have been afflicted by cancer, and has launched a youth arm.

"When I was diagnosed I saw the impact it had on my daughter and my husband. While talking to the children [of other cancer patients] they were afraid their parents are going to die," she says.

It has launched a programme to cover the cost of schooling for one child each year; does a hamper; and visits homes to help lift spirits and to encourage people to do the necessary tests because early detection is the best defence.

The disease can be cruel and has a lasting impact on those who have been afflicted by it and those affected as a result.

And she prays. For friends and families. But most of all, she prays prayers of thanksgiving. For her own family. For everything. For life.