Ian Douglas: Ross will be back 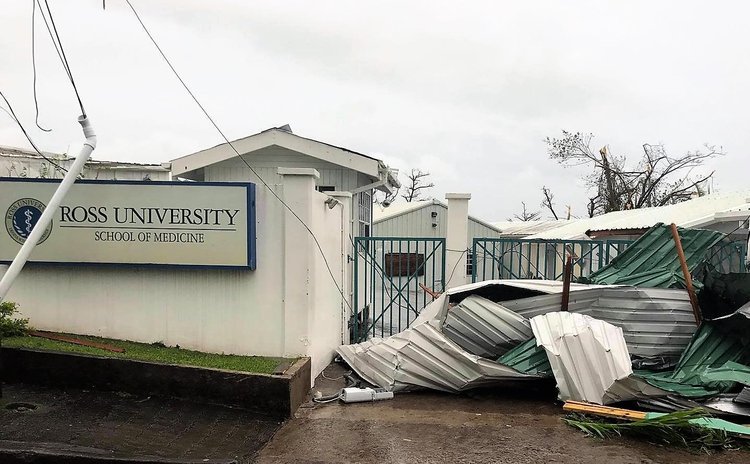 Homeowners in Portsmouth who accommodated students attending the Ross University School of Medicine (RUSM) say since Hurricane Maria devastated Dominica on September 18, 2017 followed by the closure of RUSM and the departure of its students to St. Kitts and elsewhere, they have lost thousands of dollars and the economy has since "plunged."

Following Hurricane Maria in September, Ross announced in a press release that 1,400 students, faculty, and staff planned to relocate temporarily to Knoxville, Tennessee to continue their programme of study.

Currently, students are completing their fall semester medical sciences curriculum on a cruise ship ported off St. Kitts and plan to begin their winter semester at the new facilities.

RUSM plans to relocate to facilities owned by Lincoln Memorial University (LMU) based in Harrogate and with operations in Knoxville. LMU will provide the necessary operational capacity and the technical capabilities to support RUSM faculty, students and staff.

But Prime Minister Roosevelt Skerrit is hoping that Ross will return to Dominica by May 2018 to recommence classes.

"We are also helping the property owners, the Dominican citizens who own properties in Picard to rebuild. That is why we have extended the loan facility at the AID Bank to the property owners so that they could have their apartments fixed, they could be able to buy some new beds – those who need beds – appliances and so forth so that they can get that going in quick order," Skerrit said.

According to the Prime Minister about 80 percent of the homes RUSM needs for student accommodation are available.

Meanwhile, Pat Corbette, a businessman in Portsmouth who has invested hundreds of thousands of dollars in constructing apartments told the SUN that since September 2017 he has lost much income.

"I haven't had any income since September and I don't know when it will resume," Corbette said. "The Portsmouth community is devastated. We landlords are going through a rough time economically and it is very stressful. Everything having to do with the Ross students is now gone," Corbette said.

He added that "despite the serious economic situation that we are now facing, I am very optimistic, based on what I have been told and am hearing that Ross will be back in Portsmouth. I heard that they will be coming back home, and home is Portsmouth, in May 2018. Although I must confess, that there is still nothing concrete and we don't have no definitive word on that but the feedback I am getting is that the main problem is stable and reliable internet which is what the students require."

Corbette added that the number of available apartments is increasing but "no money is coming in".

"We have more than enough housing for the students, that is not an issue and 85% to 90% of the houses which were damaged have been repaired," Corbette said.

Two other persons, who requested anonymity before speaking to THE SUN about the conditions at Portsmouth since they have much investment in the area, say the conditions are rough.

"Ross said they will be back and they will be back as soon as the buildings which have been destroyed during the passage of Hurricane Maria are rehabilitated, then things will move into another direction. Also the rehabilitation work has to be completed on campus." Douglas said. "The Ross industry in Portsmouth and by extension Dominica will bounce back".

He added: "Every sector in Dominica has suffered some loss and dislocation and Ross is no exception. The Government of Dominica is interfacing with Ross on a governmental level and as Parl-rep I am part of it; so I am on top of the action…my message is Ross will be back … Ross will be back and do what you have to do when they return. Ross is also playing its part, so we also have to play our part. Ross will be back."