Ian goes as Parl Rep too

Ian Pinard,Parliamentary Representative for Soufriere resigns over sex scandal setting the stage for a bye-election within three months 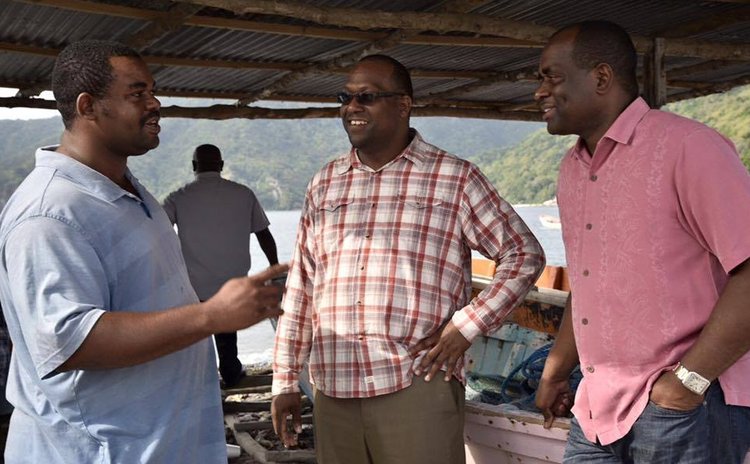 Dominican politics in normal times is a roller coaster ride but Ian Pinard's resignation tonight as Parliamentary Representative for the Soufriere Constituency is like having a seat in a high-flying Ferris wheel, in a hurricane. It was breathtaking.

Saying good bye tonight was not easy for Pinard; unless he's a better actor than Morgan Freeman, the situation was indeed tearing him apart because during a five-minute speech Pinard broke down and cried many times as he took deep breaths and drank dozens of gulps of water. Probably fearing Pinard would collapse, veterinarian and Minister of Trade Dr. Collin McIntyre left his seat and stood by Pinard's side as the MP read from a prepared speech.

"I met earlier with the Honourable Prime Minister Skerrit and informed him of my decision to resign as Parliamentary Representative for the Soufriere Constituency," Pinard said, loudly sucking in air, drinking multiple gulps of water in quick succession . "I have written to the Speaker of the House of Assembly, Alix Boyd Knights."

And Pinard's supporters in the crowd could not believe their ears and shouted: "No! No! No!"

Pinard told the meeting of the Dominica Labour Party (DLP) Constituency Group in Pointe Michel that resigning was one of the most difficult decisions of his life but the issue of a court charge against him has been taking its toll on him physically and emotionally.

Pinard said that though he maintains his innocence of the charges the rumours have developed into a national scandal.

"Ian Pinard has just grown 10 feet taller in my eyes!," said Prime Minister Roosevelt Skerrit in a speech at the meeting. "Tonight, I am saddened by his resignation, but I am touched by his honour".

Prime Minister Skerrit said his party will begin immediate plans for the inevitable bye election to be held within the next 90 days in Soufriere, Gallion and Pointe Michel.

"We shall not turn our backs on him. We shall not throw him to the wolves...or under any bus!" Skerrit said adding: "His happiness is our happiness! His grief is our grief! His pain is our pain! His struggle, is our struggle....for we are ONE family!"

Skerrit said he will be meeting with the DLP constituency group later this week to begin the process of selecting a successor candidate to Ian Pinard.

Pinard won the Soufriere seat for the DLP in 2005 with 1168 votes or 56% against Ferdinand Frampton of the UWP who obtained 903 votes or 43.6%. He then left politics "for health reasons", he said, and was replaced by Sam Martin.

Ironically, Martin increased the margin of victory for the DLP in 2009 with 1214 votes (59.4%) against Glen Etienne of the UWP who received 777 votes or 38%. Felita Paul Thomas of the Dominica Freedom Party received 53 votes or 2.6% of the votes.

Then Pinard returned and has been floored by a scandal that has also affected Joshua Francis, the UWP parliamentary representative for Roseau South. On Sunday Francis was stripped of his post of UWP political leader. The obvious question is: will Joshua follow Ian and resign as well?

In the speech Skerrit said that Soufriere "is a seat we must not and will not lose" and he added that he wants the party at "full strength and energy of the party to be at work in this bye-election".

"It is Ian's wish that we win, and I am saying here and now, I want to win BIG...as a tribute and in honor of the outstanding work of Ian Pinard in this constituency," Skerrit said.

In March, Pinard who held the Public Works portfolio in the Skerrit Cabinet resigned over allegations of inappropriate behaviour with a young girl.

In a statement that he read at that time on State-owned DBS radio Pinard said he had a moral and fiduciary duty to address the public on the issue.

"In light of these allegations I consider that my continued presence in the Cabinet can adversely impact the very important work that this Government is doing and must continue to do for the people of Dominica.

" In order to allow me to properly address the allegations against me and also to focus on other important personal matters, I have earlier today tendered to the Honourable Prime Minister my resignation as a minister of government with immediate effect".

But Pinard said then he would "continue to serve my constituency of the Soufriere constituency pending what I am confident will be a successful conclusion of this matter."

But Pinard has decided, or someone decided for him, that he must go now before the court decides his guilt or innocence.