If we have learnt the lessons that David and Maria taught, we are not practicing them 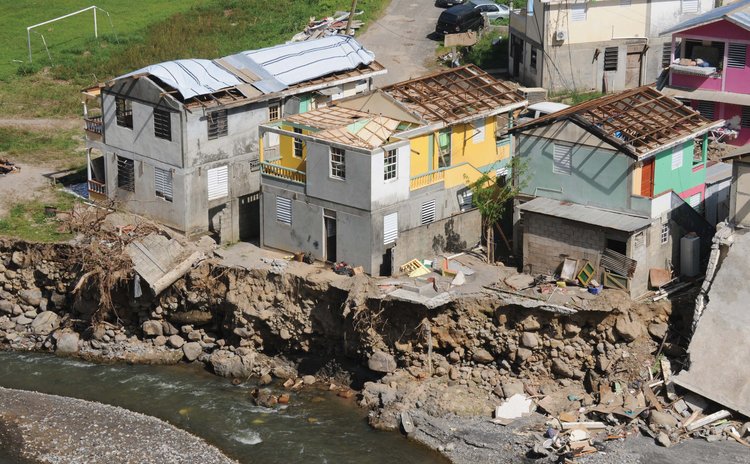 Next week Thursday we remember David, the Category 5 hurricane that devastated Dominica on 29th August 1979, that is, four decades ago.

It is not that we have forgotten his two-year-old sister, Maria-who can ever forget? But David has special significance.

Firstly, the island was just recovering from the political storm that brought down the Patrick John regime in a hail of bullets and stones and blood. That was on May 29th1979, three months before David.

Secondly, we cannot forget hurricane David because that monster storm struck one year after the island attained political independence; we were on our way at last, foraging on our own in the world at last, free at last, when David landed that unanticipated knockout punch. We had not completely recovered from David's physical and psychological blow when Maria punched Dominica again-real hard. Are we becoming nature's punching bag? Maybe not.

But what is significant about David and Maria is that we have not learnt some major lessons that David and Maria taught. We are still a significantly divided nation, a people drunk on political party divisiveness, extremely gullible to pie-in-the- sky slogans such as Dominica becoming the first, the very first, nation in the world to be resilient to climate change-and , not in three or four decades, but in five years.

How can any exceedingly poor nation- the second poorest in the hemisphere- an extremely mountainous country, with a government continuously accused of corruption, and with a divided people of about 60,000 become the very first climate-resilient country in the world? In five years. Just think about it for a few seconds. Friends, let's be realistic, let's stop fooling ourselves, let's stop repeating slogans that we really do not believe to be practical. But we digress.

It has probably become a cliché to say that Dominica can learn many lessons from the numerous storms that has devastated the island over the past three decades.

Nevertheless, as we have said in earlier editorials, Dominicans continue to display an unhealthy level of complacency to catastrophe after catastrophe, from Hurricane David to Tropical Storm Erika to Hurricane Maria.

Now that Maria has again crippled Dominica's infrastructure we are repeating ourselves- we care so little, we take so many things for granted, we seem to like it so.

Ironically, Dominicans will observe the anniversary of the passage of Hurricane David two days after observing Erika's anniversary and two weeks before the mighty one-Maria.

Although it can be said that the physical and psychological scares of Hurricane David have somewhat healed, we believe that Dominica has not effectively learnt the lessons that it should from the ordeal.

Following Erika and Maria, there can be no doubt that the island is still as vulnerable as it was on 29th August 1979.

On that day, one year after the island attained political independence from Britain, David, a Category Five hurricane packing winds of 150 miles per hour and carrying millions of gallons of rain slammed into the island.

David striped trees from mountains and smashed homes to smithereens. After pounding Dominica for more than six hours, 56 people were dead, more than 180 injured and 75 percent of the population were homeless. For many months after the hurricane, hundreds lived in tents or lodged with more fortunate friends.

Most significantly, Dominica's economy was virtually swept away by the winds of David. Roads and bridges were destroyed and on Dominica's farms, almost every banana plant was broken and coconuts and other fruits littered the ground.

Thankfully, many countries came to the aid of our distressed country. After two months, the Interim Government of Oliver Seraphin announced that it had received pledges of US$37 million mainly from the United States, Britain, Canada and Caribbean countries. How many pledges have we received after Maria? We haven't been told.

Apart from the physical damage, one of the more lasting impacts of Hurricane David was the massive exodus, in the wake of the storm, of the country's human recourses especially young, educated and trained members of the work force. That impact is still being felt 36 years later. We don't know how many Dominicans left after Maria and how many have returned. We've asked but we haven't been told.

The point we need to stress here is that given the severe pain that David caused and the generally high cost of natural disasters, one would expect government and the population generally to plan more adequately because we do not exaggerate when we say that the threat of being devastated by another major hurricane or an Erika-type tropical storm is as real as Dominica's clear rivers.

Long before the recent hurricane and tropical storm struck, architect Severin McKenzie said that he believed Dominica needed to go beyond the antiquated approach of having people in disaster relief committees as opposed to preventing disasters from happening. Prevention is always better than cure.

Severin added: "If you know your house is not strong enough, before a hurricane you can strengthen it. So be proactive and retrofit your house. We are not moving in this direction at all."

In other words many people, too many people, are not taking measures to reduce the cost of disasters. Maybe too many of our citizens are too poor to apply effective disaster risk reduction measures.

Based on discussions with persons who are familiar with the state of Dominica's preparedness and its economy, we conclude that though Dominicans are definitely more aware of the occurrence and consequences of hurricanes and tropical storms, the country is very much underprepared for major disasters as it was on August 29th 1979.